Cobot maker Universal Robots announced this week that qualified US orders received and processed by December 16, 2018 will be delivered by the end of the year.  This is especially important for manufacturers hoping to meet the December 31 Section 179 tax deduction deadline.

With the help of the Section 179 tax deduction, US businesses may be able to significantly stretch their use-it-or-lose-it 2018 budgets and purchase collaborative robots to take on the repetitive manufacturing tasks that workers don’t want.   Section 179 requires that qualified equipment and off-the-shelf software is purchased and placed into service by December 31, 2018, but with its unique quick-ship program, Universal Robots can make that happen.

ICONSYS released video showing a cobot system they developed for panel building.  The system combines M-I-R, ICONSYS' interface module, a gripper from Robotiq and a cobot from Universal Robots...

Officials from Mazda Toyota Manufacturing USA and the US state of Alabama --with some help from a robot-- broke ground on the automakers’ joint US$1.6 billion plant in Huntsville.  (H/T BizJournals) 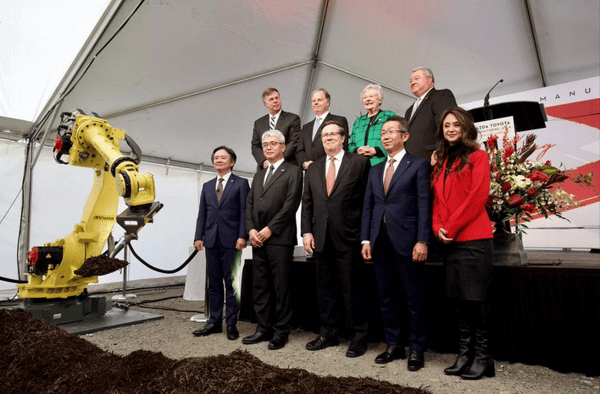 The auto-manufacturing facility is expected to start production of 300,000 vehicles annually from 2021.  Credit:  Mazda

TFLCar went behind the scenes at Jeep's Toledo manufacturing facility to see how Jeep Wranglers are made.  The world's largest industrial robot makes an appearance alongside some impressive mobile robots... 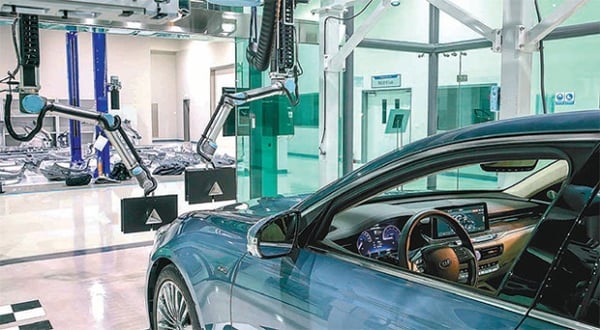 Via The Dong-A Ilbo:

The collaborative robot made by Hyundai and Kia is able to check six different functions in a single process, including the five ADAS functions, which include the Forward Collision-Avoidance Assist (FCA), Lane Keep Assist (LKA), Blind-Spot Collision Avoidance Assistance (BCA), Smart Cruise Control (SCC) and Surround View Monitor (SVM) in addition to the Head-up Display (HUD), in just 85 seconds.

Researchers from Australia and India revealed the “Arm-A-Dine” —a prototype robot arm worn in the middle of the chest that picks food from the table and delivers it to you (or your dining partner’s) mouth.

Arm-A-Dine not only grabs food from the table, but also makes a judgement on who to feed it to. A facial recognition app running on an attached smartphone scans your dining partner’s expression. If they’re smiling, your arm offers them the food; if they’re frowning, you get it. (And if the expression is neutral, the arm hovers ambiguously in the middle.)

I need a robot like the Arm-A-Dine, but one that has been modified to pinch me whenever I try to exceed my weekly chocolate biscuit allowance.

Korea is the leading nation for robotics adoption, followed by Singapore, Thailand, China, and Taiwan, according to a new report from the Information Technology & Innovation Foundation (ITIF). 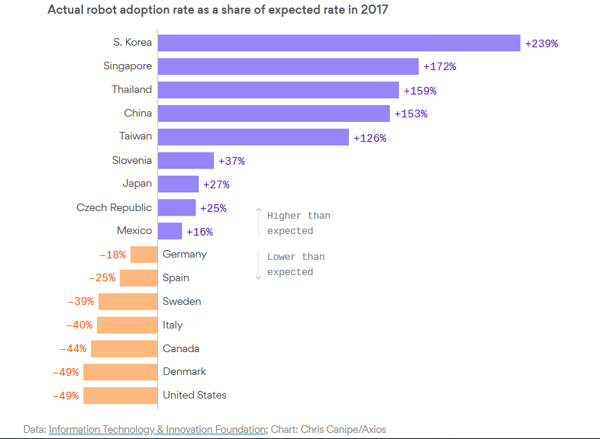 The report uses data from the International Federation of Robots to rank industrial robot adoption rates for 27 countries. However, it adjusted the rankings to account for variances in manufacturing worker compensation, as the decision to use robots typically relies on the cost of funding the technology versus funding a human worker's salary.

In tests conducted on the 914-meter runway of an airport in Byron, California, AEye's iDAR system was able to detect and track a truck at 1,000 meters --some four times the distance detectable by current LiDAR systems. 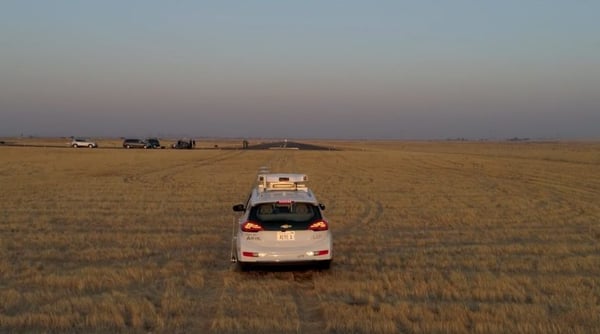 Finally, as part of their Thanksgiving celebrations, the folks at Houston Mechatronics Inc showed off the best way to cook a turkey...

Make sure to visit next week for more of the latest robotics and AI news!  Until then...

2.  New video shows Henrik Christensen, one of ROBO Global's strategic advisors (and Qualcomm Chancellor's Chair of Robot Systems professor in the Dept. of Computer Science and Engineering UC San Diego) speaking at a recent event about important trends in robotics and artificial intelligence.

3.  A new restaurant has opened in China, staffed by one human manager and  seven robot cooks.

4.  Engineers at Stanford's School of Engineering have developed an electronic glove that could one day be used to give robots "the sort of dexterity that humans take for granted."  (Via Stanford News)

5.  Meet Affetto --a child android built by engineers at Osaka University to help them explore how to "effectively control android facial movements to introduce more nuanced expressions, such as smiling and frowning.”  (H/T TechCrunch)