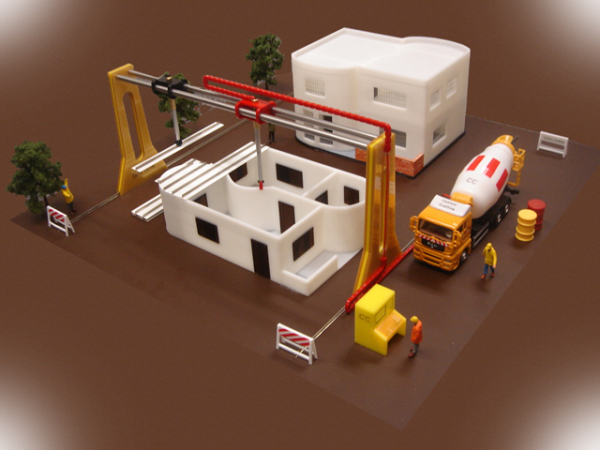 Say you have an inkjet printer. Now, instead of applying ink to paper, you’re applying a plastic filament of a certain width. If you go over it several times, you will create a 3D object. You now have a quick prototyping machine like those offered by Stratasys that we often use at Robotiq for prototyping. Now let’s push the idea a little further. Use concrete instead of plastic and increase the scale by a factor of 100 or 1000. You will have a robot like in the illustration, capable of constructing buildings, layer by layer.

Two separate groups are trying to achieve just that, and soon. One is American (see their site for animations) and the other is English. As you can read in this Times Online article, the American group is developing a 1½ million dollar US system that can build a single-family home in 24 hours. This system should be ready within a year. The English system, ready in four or five years, will be able to build a house in about a week. However, it will be able to directly construct the plumbing, air conditioning, and the electrical and communication networks.

Say you have an inkjet printer. Now, instead of applying ink to paper, you’re applying a plastic filament of a certain width....