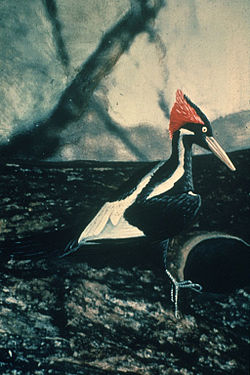 The search for Ivory-billed Woodpeckers (image) is a true wildlife investigation underway right now in the south-east United States. This bird, about half a meter long and with a one-meter wingspan, inhabited the virgin swamp forests of the area shown on the map below. The parcelling of this habitat led to the bird’s possible disappearance.

The species was declared extinct in 1996 by the International Union for the Conservation of Nature. The last photographed sighting goes back to the 1930s. However, the hope to see a living specimen was rekindled a few years ago. Some ornithologists believe they have observed and heard what may be an ivory-billed woodpecker. Following this, teams were deployed in Arkansas and Florida to capture recordings of the bird. Scientists record their observations in their online diary: Cornell U, Auburn U.

The search for Ivory-billed Woodpeckers (image) is a true wildlife investigation underway right now in the south-east United...