Good morning.  In this week's news mix: cobots build composites, cobots for 'when humans aren't optimal' and cobot Chef B blends smoothies.  We also encounter a robotic dog paw, cheer a British road-marking bot, admire a colorful swarm of 2,000 drones and much more!

Researchers at the Center For Advanced Manufacturing in USC Viterbi unveiled a cobot-based system for making composite parts this week.  Designed specifically for layout tasks, the cobot cell lays and smooths out each layer of composite, ensuring no wrinkles form along the way.  The system can adapt to some problems on the fly and knows when to call for human assistance...

If humans were all the same and performed the same way at all times, achieving seamless human-robot collaboration in all sceanrios would be a less complex engineering challenge.  Unfortunately (from the engineering perspective, that is), we aren't all the same and human performance varies over time.

With this in mind, researchers are working on systems that enable bots to interact with humans that "choose suboptimal actions due to risk [awareness], limited decision time, or incomplete information." The Stanford Intelligent and Interactive Autonomous Systems Group (ILIAD) released video this week of a prototype system in action...

It's been a while since we caught up with Chef B --the cobot smoothie chef developed by Blendid.  Well, following successful trials at Sonoma State University in the United States, it emerged this week that the cobot (which combines a UR cobot with a 2-finger adaptive gripper from Robotiq) is set for a grand formal launch on campus, Jan 22nd. 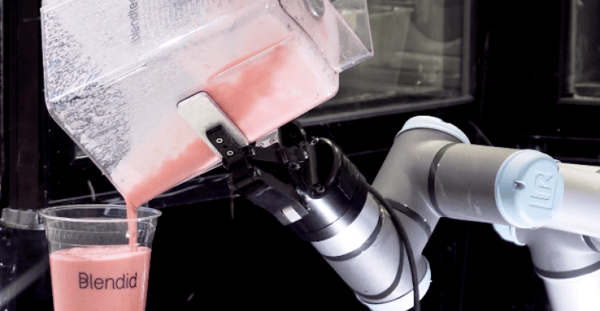 The unit takes both mobile orders and orders from an adjacent kiosk, processes the payment, then swiftly selects and measures the fresh fruit and vegetable ingredients (no water or ice is added), blends, pours and serves up each custom-made blend in about three minutes.

A robot road marker grabbed headlines in the United Kingdom this week as it was revealed that the bot successfully pre-marked eight miles of highway in just four hours, a job that would normally take two engineers more than a week to complete.  The bot also reduces the number of delays experienced by drivers during road marking projects. 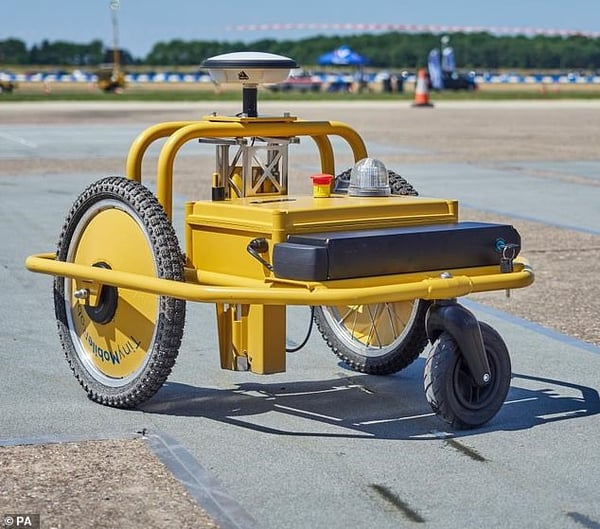 Savings elsewhere include saving 27 hours of working time marking three miles of hard shoulder on the M4 in Berkshire, 77 hours covering five miles of the M6 in Warwickshire, and six hours working on two miles of the M1 in Leicestershire, with further work done on the M60 smart motorway at Manchester.

In a move that could usher in a new era of aerial combat (and controversy), The Royal Australian Air Force and Boeing are working on an autonomous fighter jet that could see service as soon as the mid-2020s.  The 11 meter (38 feet) drone is designed to accompany manned flights during missions, potentially performing recon operations or adding lethal firepower. 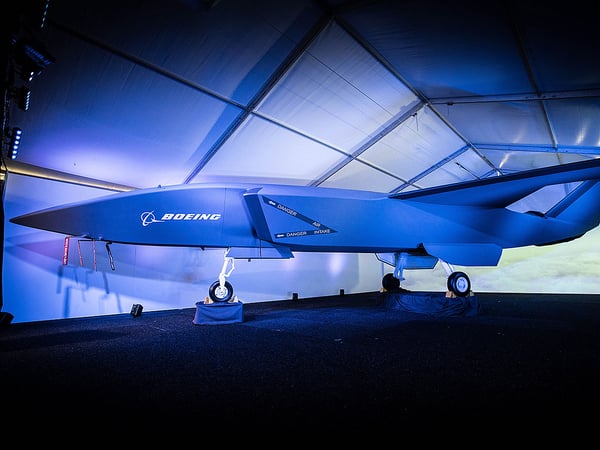 Trials of the 'Airpower Teaming System' are expected later this year.  Credit: Boeing

Three prototypes will be built under a project first revealed by Boeing and the RAAF in February 2019. Those prototypes are not meant to meet predetermined specifications but rather to help aviators and engineers work out the future of air combat. This may be the first experiment to truly portend the end of the era of crewed warplanes.

The Additive Manufacturing Centre at Jaguar Land Rover has unveiled a 3D-printed replica of a dog's paw that's attached to a robot and then used to test "the ability of the rear bumper to tolerate the damage done when a dog’s claws scrapes the paint before and after dog walks." 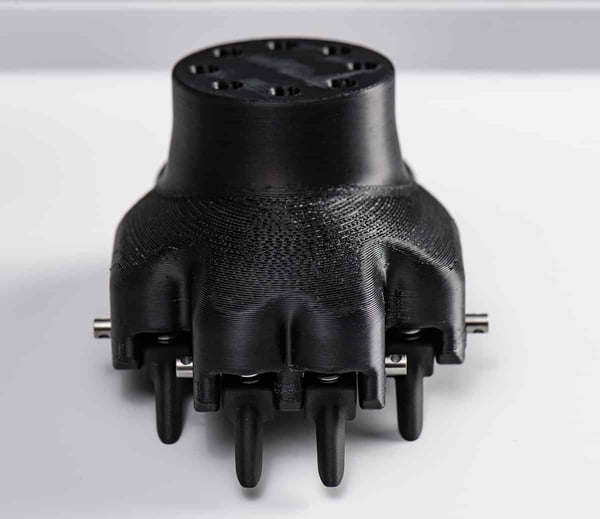 This life-like replica of the paw is now used by the Jaguar Land Rover team for a standard 5,000 cycle abrasion test. During the test, ‘RoboYogi’ scratches the panel at random ten times followed by a linear scratch to one side, and the process is repeated over again.

Come back next week for more of the latest robotics news, including the big robot stories from CES 2020! Until then, please enjoy...

1. On New Year's Eve the city of Shanghai counted down to 2020 with the help of 2,000 drones that combined to create an awe-inspiring light show.

2.  OFFWORLD is a Californian startup that's developing autonomous mining and construction bots for use on the the moon and Mars.  On Wednesday, Voice of America profiled the company's work.

3.  Mohit Shridhar is helping to create the robot butlers of our dreams.  While at the National University of Singapore, Shridhar helped develop the INGRESS system, which allows humans to control domestic robots using verbal commands.  Shridhar's research now continues at the University of Washington.

4.  China has unveiled its first fishery underwater cleaning bot. The 400 kg (881.84 lb) device, which is already in service in northwest China, was developed to improve water quality and protect aquaculture ecology.  (CCTV+ has more.)

5.  ICYMI: Agility Robotics had a busy year with the final deliveries of Cassie and the launch of Digit.  Waaaay back on Dec 31st, 2019 the company released video showing some of the amazing milestones achieved.