The RUC started with some surprising news from A3's Jeff Burnstein: we don't know how big the cobot market is! Here's what he covered in the first keynote of the day.

What a start to the first day of the The Robotiq User Conference! We've had some spectacular sessions this morning, starting with the one of the biggest names in industrial robotics: Jeff Burnstein from A3.

In his keynote this morning, Jeff revealed that we don't how big the collaborative robot market is… and that he once almost lost his hand to a cobot.

Jeff Burnstein is the President of A3. He has worked for over 30 years to promote the use of robotics and other automation technologies. 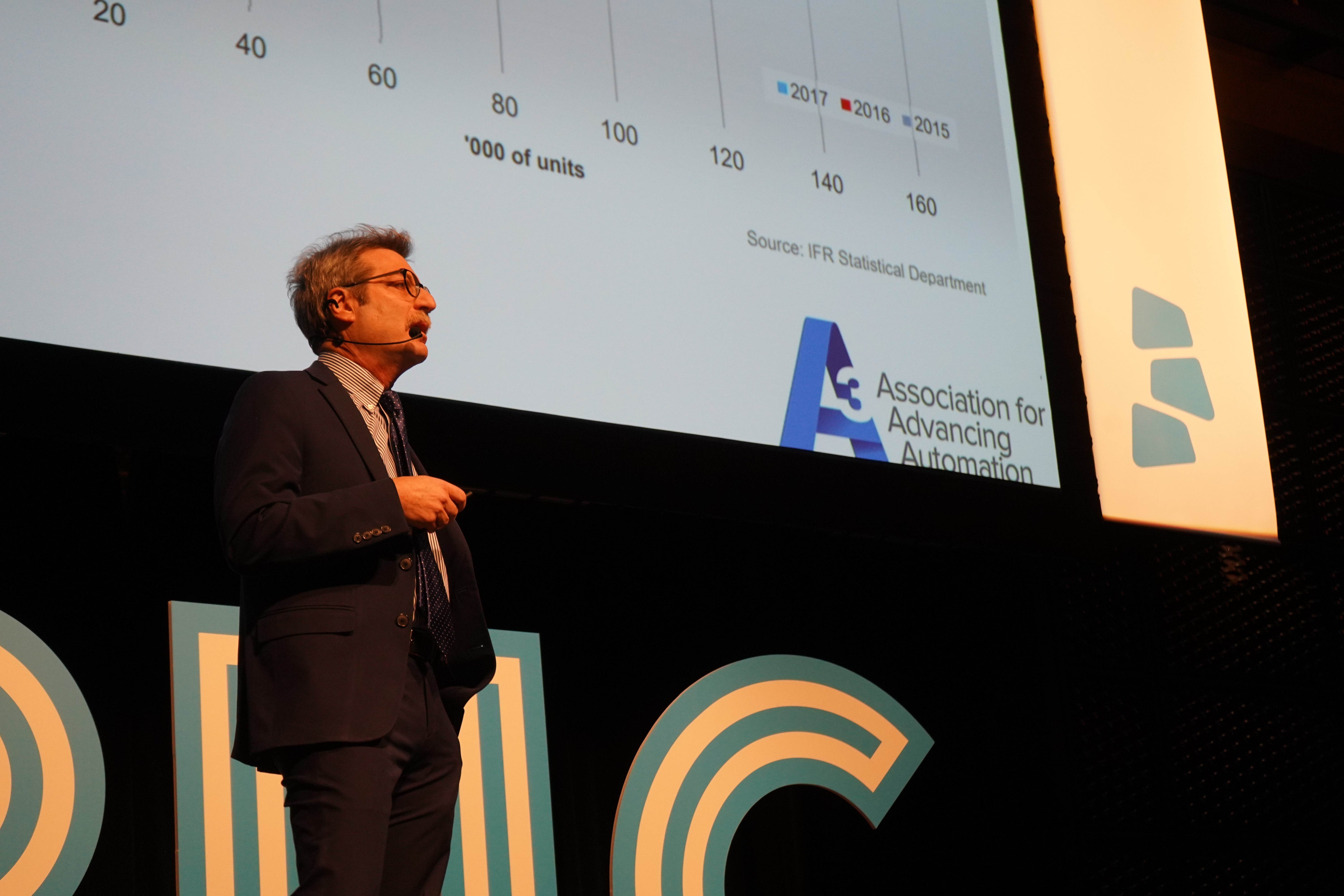 If you're not familiar with A3, here's the lowdown. The Association for Advancing Automation (A3) is THE global advocate for the benefits of automating. They are an umbrella association for other leading bodies in robotics, including RIA, AIA and MCMA. They make it their business to promote automation technology to businesses around the world. Jeff has also advised congress.

"The A3 really pulls together a lot of different technologies that are needed for automation, and they represent it really, really well."

We don't know how big the market for cobots is!

One surprising fact that Jeff revealed during his keynote is that the size of the cobot market is really a mystery right now.

"How big is this market? We know it's growing quickly. We really don't know what the numbers are. Neither the IFR or the RIA is able to collect enough data to separate out the collaborative robot market." 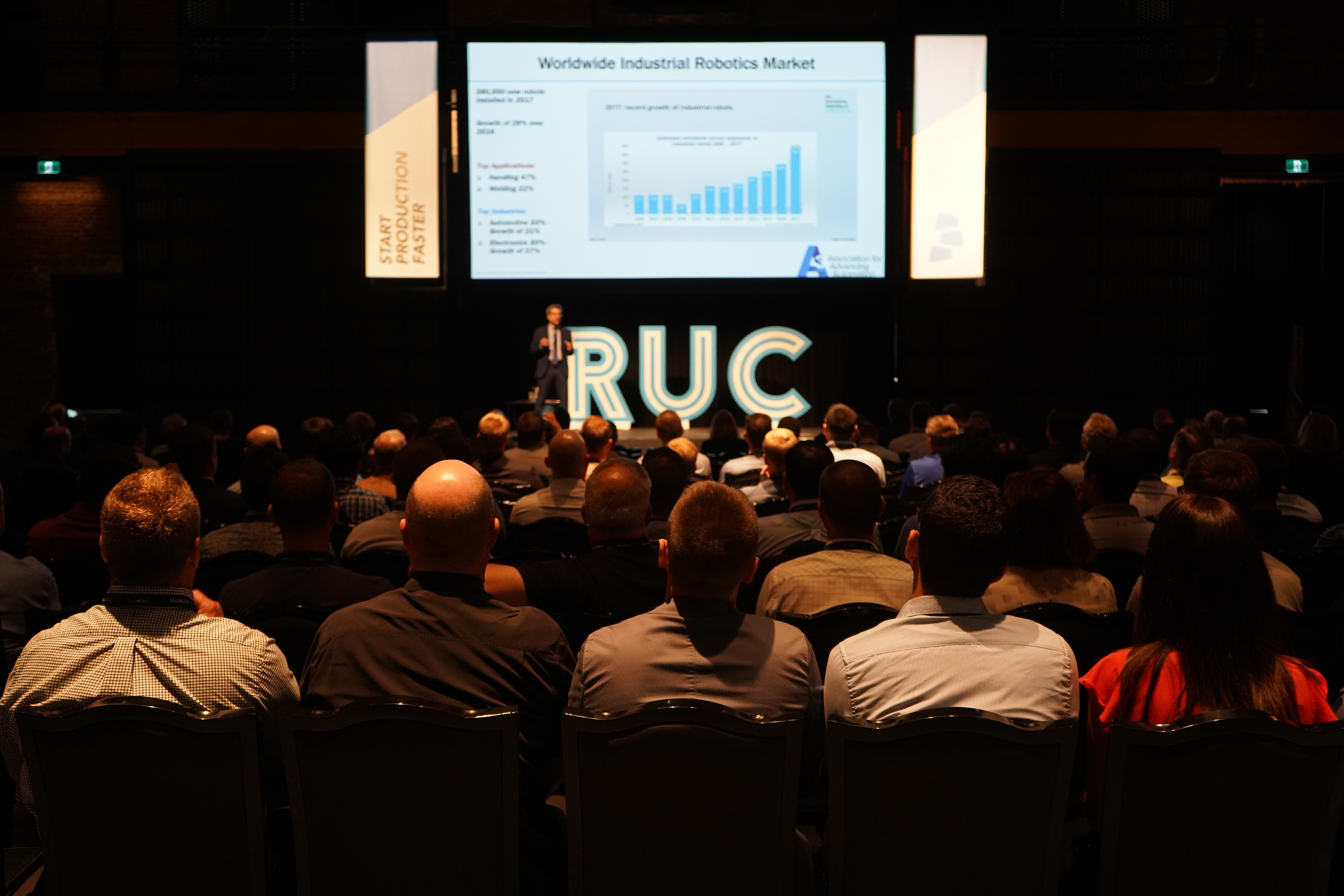 He went on to compare some of the studies which attempt to put numbers on the market:

Jeff isn't concerned by these contradictory estimates because we can tell that the market is growing. We can tell because there is a rising number of cobot-targeted products products, new cobot manufacturers, and cobots from traditional industrial manufacturers.

The market is growing, we just don't know by how much.

The big issues: Safety and impact on jobs

The two main cobot issues that Jeff touched on in his keynote were ones which we have covered here on the Robotiq blog many times: safety and impact on jobs.

Jeff was very clear that safety is key issue for cobots. It's as important as it is for traditional industrial robots.

Although cobots are designed to not to cause harm if they collide with a person, that doesn't mean they are inherently safe. As he said:

"A cobot won't hurt you if it hits you. That's true, in most cases, but not if its holding a knife. If you're side by side with people you don't want somebody getting their eye poked out. So, risk assessment is probably the most critical thing."

We certainly agree! (that's why we wrote a step-by-step guide to risk assessment for cobots).

He also told a personal story which clearly demonstrates that cobots are not always inherently safe:

I thought when it hit me that it was just going to pull back. But it pressed my hand to the point that I thought I might not be able to use my hand ever again."

Inherently safe? Usually, but you still have to be careful.

Impact on jobs: Robots vs unemployment

He revealed one fascinating correlation from a study A3 had conducted of the last 20 years:

Jeff also noted that the media often says "by 2030 there's going to be 800 million jobs lost."

But, the same study that created these figures showed that 900 million jobs would be created in the same time. That's a net gain of 100 million jobs. As Jeff pointed out, that second statistic is hardly ever mentioned in the media.

He listed three factors which are real threat to jobs:

Jeff took the opportunity to tell us about the Automate conference which will be held in Chicago on the 8th to the 11th of April 2019.

You can find out about Automate 2019 at this link.