As we dismantle the many conveyor belts and put the UR e-Series back in their boxes, here's what we learned over this action-packed 3 days.

The Robotiq User Conference is over for another year. It's time for us to tidy up the Voltigeurs de Québec Armoury, pack all these shiny UR robots into their boxes, and start to think about what we can do at next year's RUC!

While the team gets out their tools to dismantle the challenge workstations, here's a recap of what we've learned through this year's RUC.

We started this year's RUC with some potentially surprising news. A3's Jeff Burnstein revealed in his keynote that nobody really knows big the cobot industry is, or how much it's going to grow. 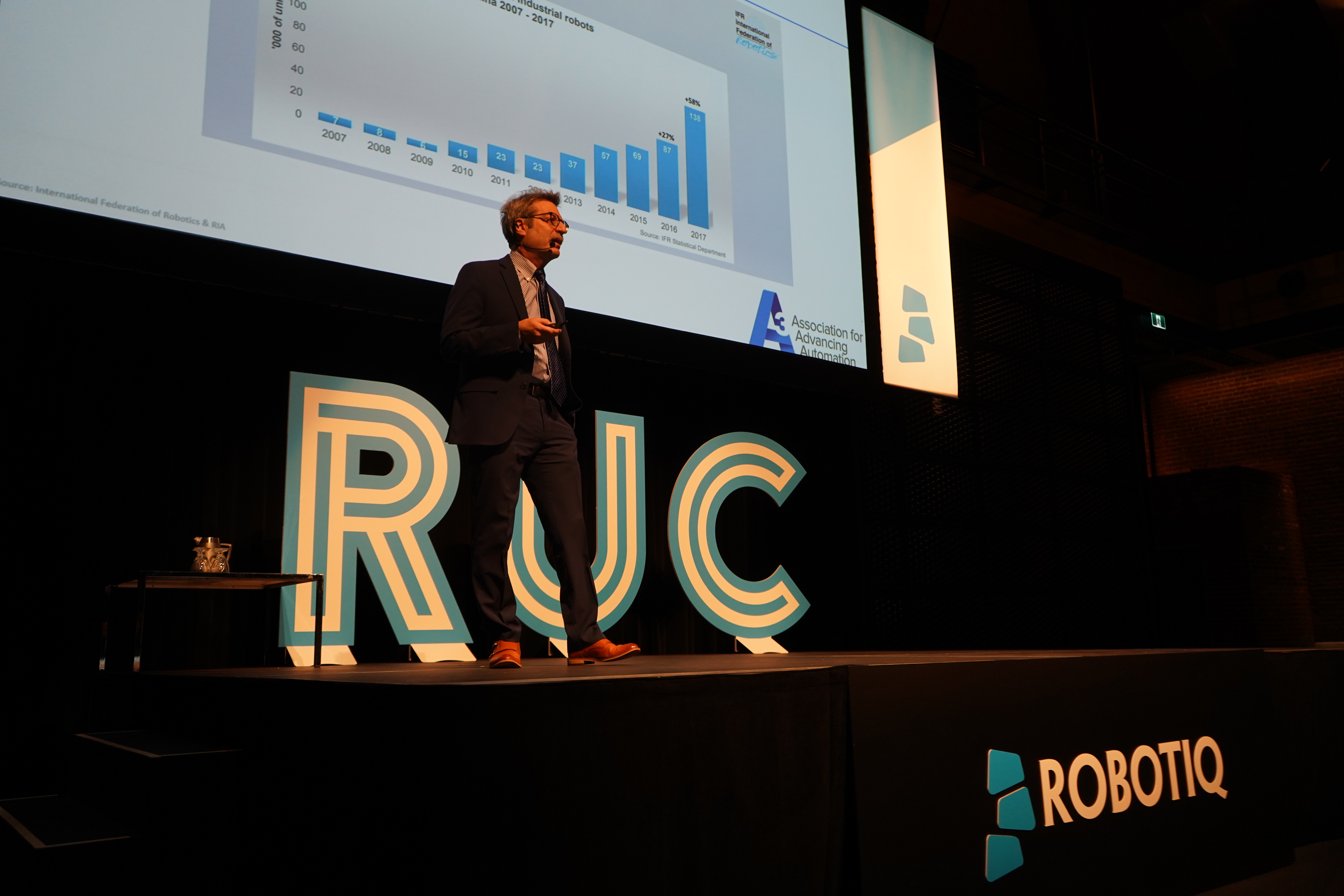 Not only are cobots becoming more popular. According to our attendees, they can achieve some tasks that traditional industrial robots simply can't do… like the task that we set participants of this year's RUC technical challenge.

As Xavier Quintero from HTL told us last night:

Safety: Is it too much or not enough ?

Safety has come up several times throughout RUC this year. Almost all of our keynote speakers on Wednesday mentioned the safety of cobots at least once.

Jeff Burnstein told us about a time when he almost lost the use of his hand thanks to a cobot and talked about the vital need to do risk assessments with cobots. Even though they are designed to be safe, he said, cobots are not inherently safe in all situations. For example, what would happen if a cobot was holding a knife?

Mark Kahwati from UR replied: Well Jeff, with the safety sphere feature of our new e-Series robots, you could give a knife to the robot and it could still be safe. He also explained how the programmable stopping time and distance in the new robots will make risk assessments easier. 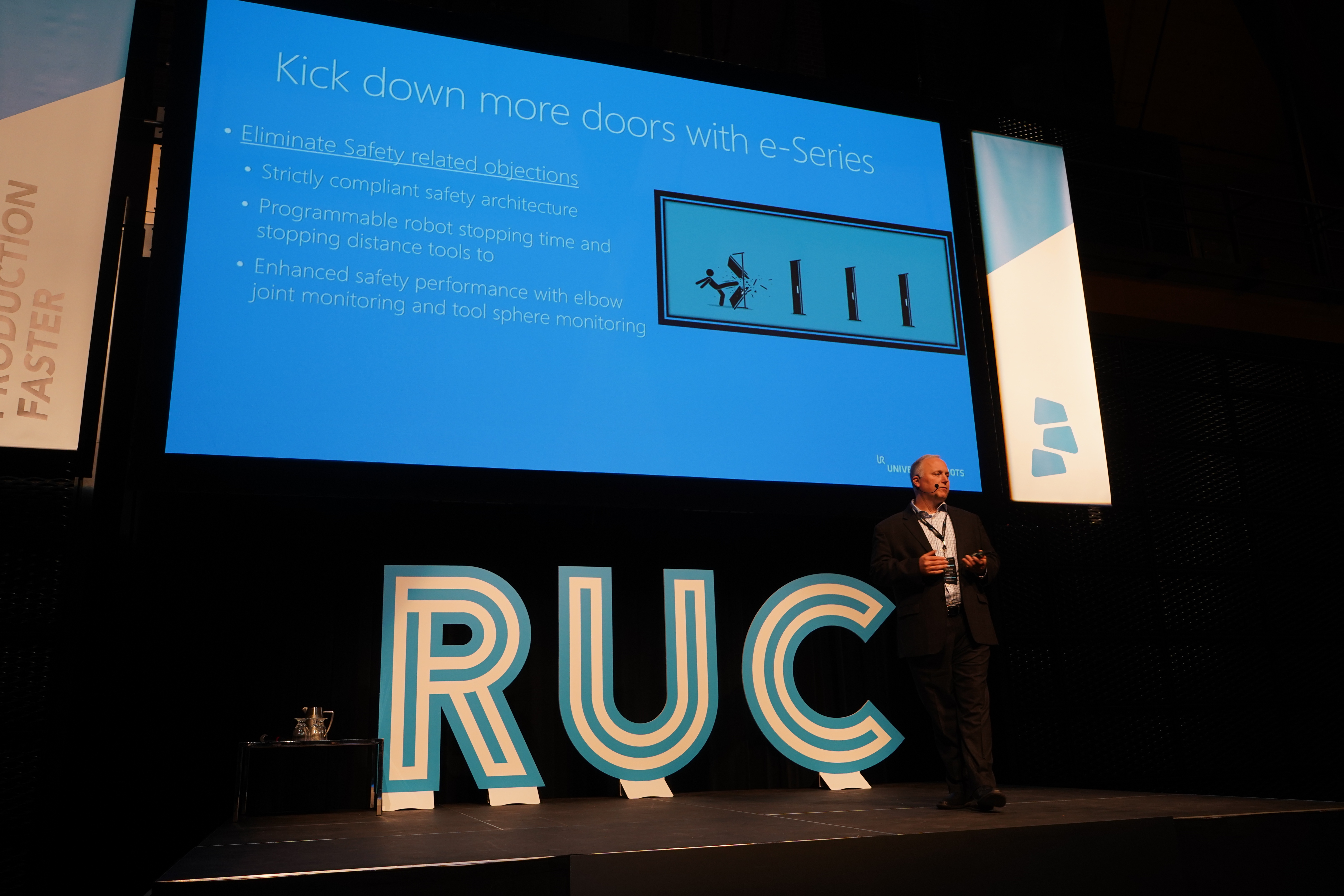 Eben Ostergaard from UR, in his discussion with Samuel Bouchard, said that he believes the safety limits of modern cobots are "super-conservative, bordering on the ridiculous." However, he thinks that this high level of caution is probably necessary to gain wider acceptance of cobots.

Are cobots too safe or not safe enough? We've not come to any conclusions, but some very interesting discussion points have been raised during this year's RUC.

We've truly seen the lean robotics framework in action here at RUC 2018. In Samuel's keynote, he explained the three stages of the framework: Design, Integrate, and Operate. He encouraged the attendees to focus on the lean robotics tagline: Start Production Faster — something which would soon become important once the technical challenge began.

Then, the teams got hands-on with the robots. Following Jean-Philippe Jobin's entertaining demo, the 10 teams in the technical challenge all got the opportunity to learn how to use the new Robotiq products and the new UR e-Series robots. 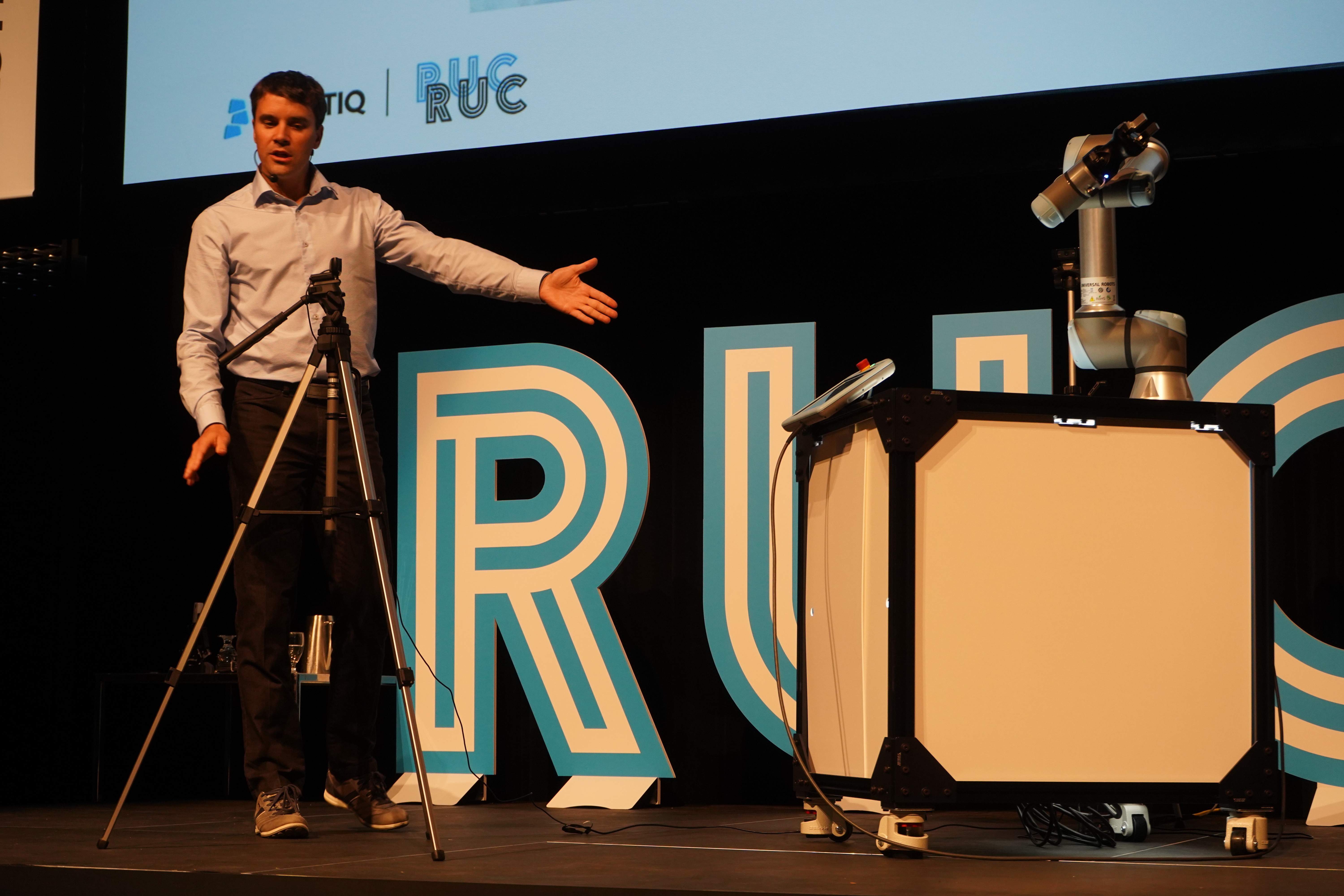 At the same time, the sales teams attended a workshop which would prepare them for the sales challenge ahead.

Then, the challenges began! 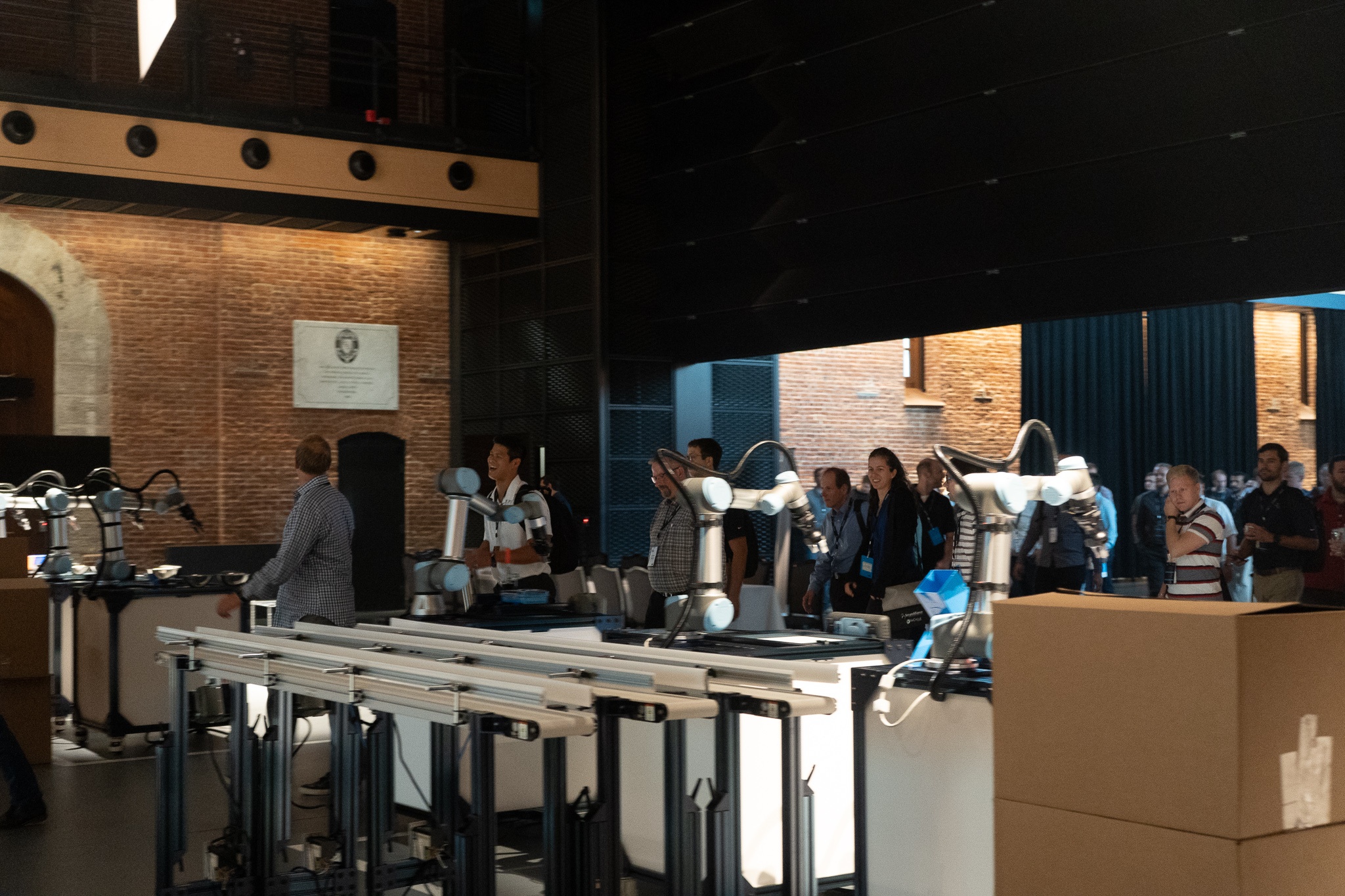 One of the great things we've noticed this year is that the lean robotics framework has not just been a theory. The teams have truly integrated it into their production during the technical challenge.

As Ryan Weaver from Axis New England told us:

"I said to my team 'Let's just Start Production Fast. Let's just get something made, and then we'll know what to troubleshoot and optimize.'

It's lean robotics in action. And it works really well!

The challenges: It's not just about winning

Earlier today we revealed the winners of the two challenges that we set our attendees here at RUC: the sales challenge and the technical challenge.

Click here to find out which teams won and why they won.

For one thing, they have learned how to use the amazing new cobot technology that is available to businesses right now: the UR e-Series robots that Mark Kahwati introduced and all of the new Robotiq products that Jean-Philippe introduced. More importantly, they also learned how to solve customer problems with these products and implement solutions quickly using the lean robotics framework.

It's time to pack up and go home for the weekend

What a week it has been! After last night's late night, we really are exhausted.

But, we can't start our weekend until we pack up and get all these robots out of here!

Come on everybody! Lend a hand! 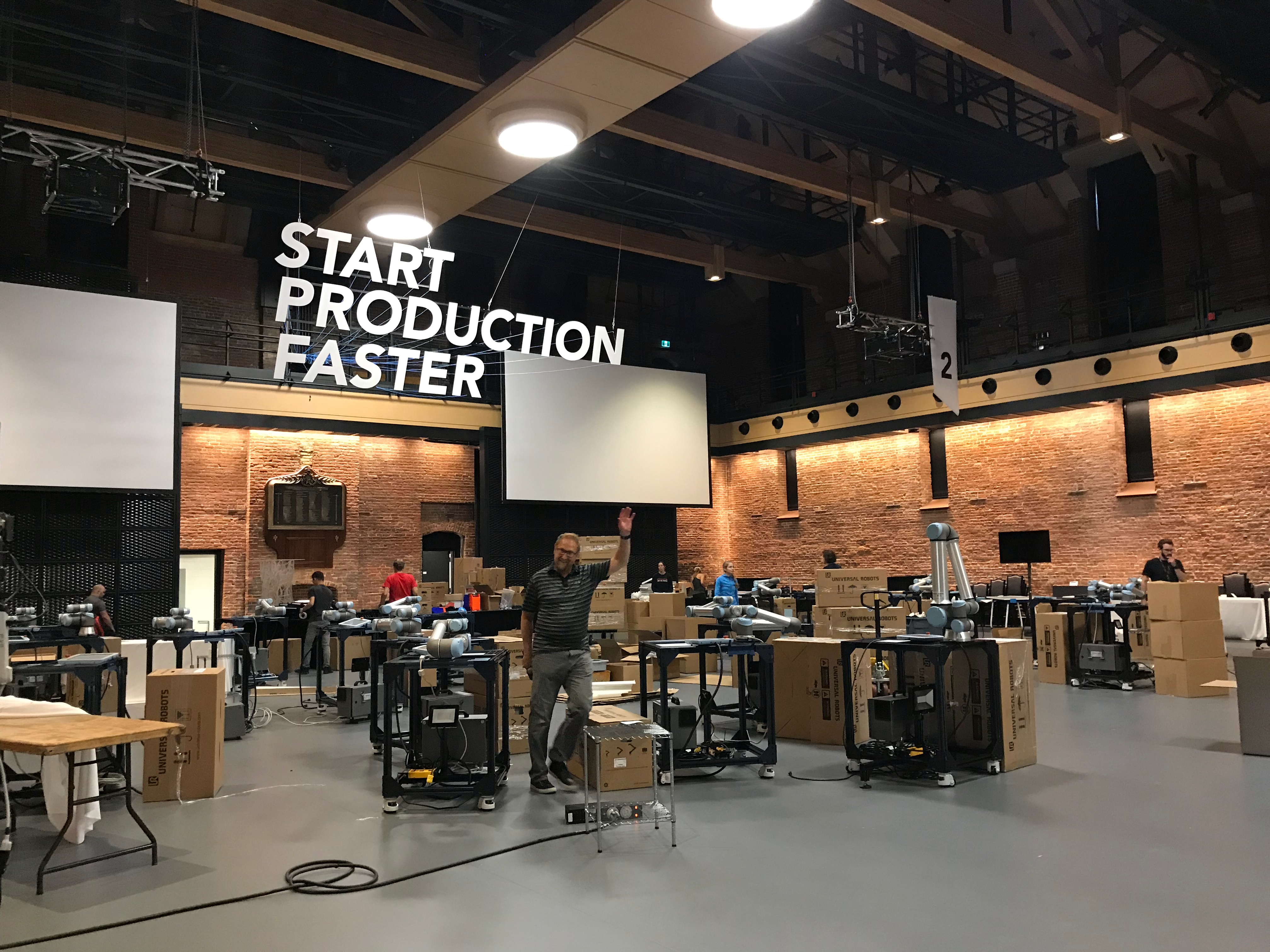 It's time to get packing. 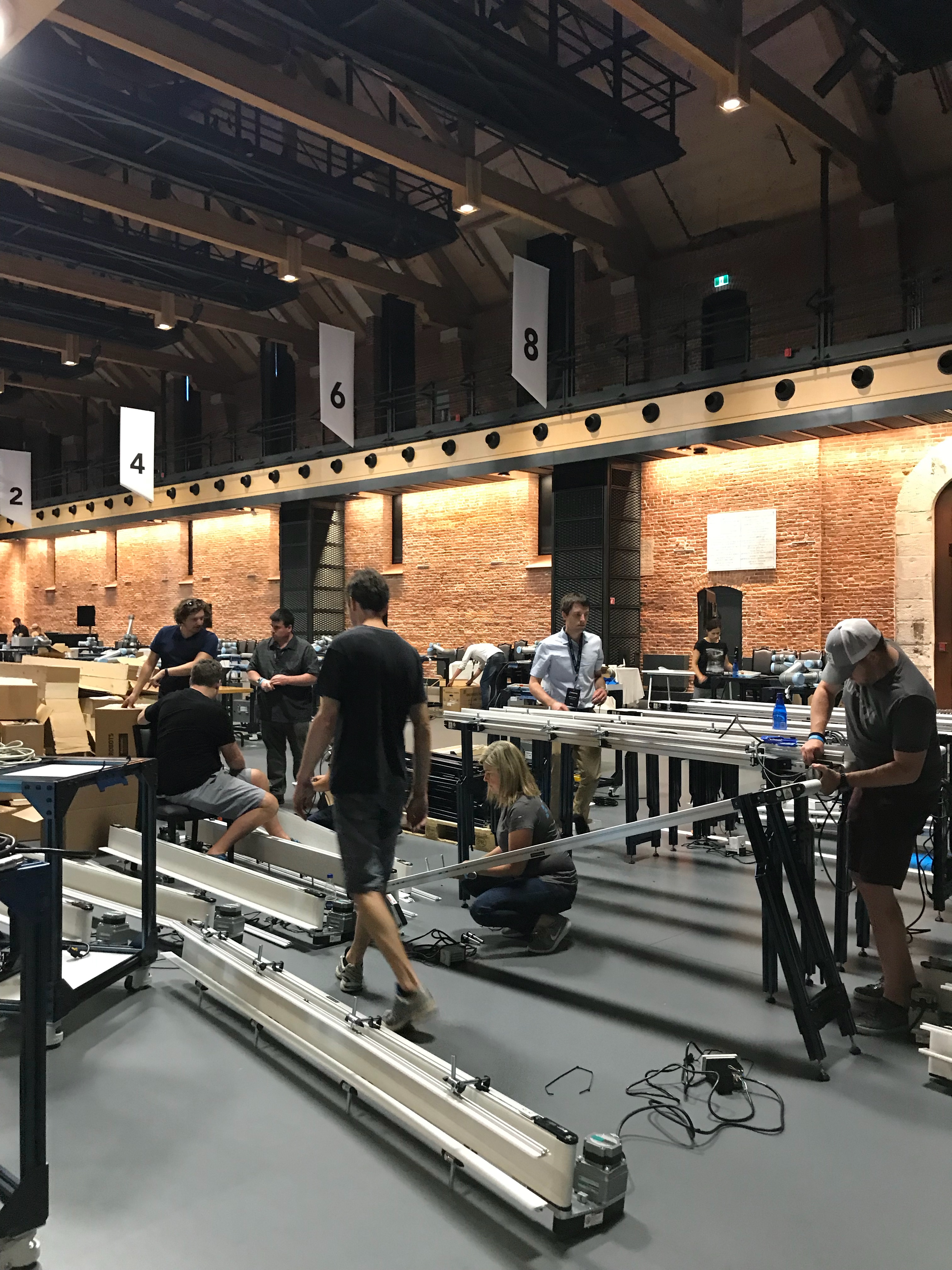 We can't wait until the next Robotiq User Conference!