The Man Behind the Robot That Built an IKEA Chair: Francisco Suárez-Ruiz, NTU Singapore 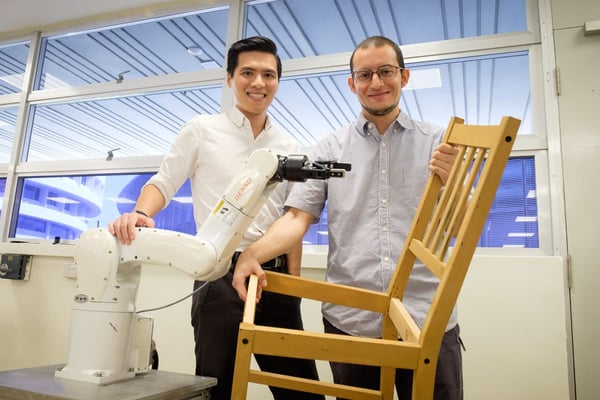 Francisco Suárez-Ruiz has been all over the news recently, from Wired and CNN to Reuters and beyond.

The Colombian-born roboticist and research fellow (at the CRI Group at Nanyang Technological University (NTU) in Singapore) led the team that built a robotic system capable of assembling an IKEA chair.

Robotiq: Congratulations on the success of your project and the global media coverage.

S-R: Thanks. We were expecting some interest, but the media coverage has been massive and it has far exceeded our expectations.

Robotiq: Using off-the-shelf components makes an interesting statement, inasmuch as it shows that existing technology can be used to accomplish surprising new tasks. Why did you take this approach?

S-R: We wanted to develop capabilities that can be deployed elsewhere in the industry. By using off-the-shelf components, we show the manufacturing industry – which tends to be skeptical – that it’s possible.

Robotiq: What criteria did you have in mind when choosing a gripper?

S-R: When selecting the gripper, we were looking at opening and force ranges as well as available interfaces with open-source tools such as ROS.

One additional factor was that I already had experience with using Robotiq's 3-finger gripper from my PhD research. (Robotiq note: for more details, see Grasp Mapping Between a 3-Finger Haptic Device and a Robotic Hand.)

I like how the combination of active and underactuated DoFs results in a versatile gripper that is easy to control, and my previous experience gave us confidence that we were going to succeed in this project.

Robotiq: Why did you choose the 2-finger gripper for the recent IKEA assembly project?

S-R: The fact that the 2-finger gripper has only 1 DoF forced us to simplify the grasping problem as much as possible.

Robotiq: I imagine that enabled you to eliminate a lot of unnecessary math and computation?

S-R: Yes. It simplified the requirements of the grasp planning component.

Robotiq: How about the integration process: what was it like to integrate the gripper and the robot arm?

S-R: Integration was very easy. We just had to manufacture one coupling plate to attach the gripper to the F/T sensor.

On the software side, all our devices use Ethernet with different protocols, which in the case of the Robotiq gripper is Modbus/TCP-IP. So the integration with our software architecture was easy as well.

Robotiq: What role, if any, do you foresee for humans in systems like the IKEA chair-assembling bot? If the same system (or a cell) used a human and a robot to achieve the same end, do you think that would make a difference (e.g. in terms of task completion times), and how might you divide the labor?

If the robots were collaborative, I would imagine some human-robot collaboration would result in faster chair assembly.

I'm not sure about dividing tasks between human and robots – I'm not an expert in that subject – but I can imagine some collaboration in the form of handing over pieces, manually fastening screws, etc.

Robotiq: If you were tasked with designing and deploying a manufacturing cell with high production requirements and quality standards for assembly of IKEA chairs, would you use the current system or a human-robot collaborative design?

S-R: Under those requirements, I think a collaborative system would make more sense. Such a system would definitely help in terms of task completion times and flexibility of the system. With the new developments in AI, I think the hard parts (from a collaboration perspective) like ‘reading’ human intentions are much closer to being solved, so I would expect human-robot collaboration to grow even more over the years.

Robotiq: What's next for this project?

S-R: For now, the team is exploring the possibility of using AI to help the robot figure out the sequence of instructions from a manual. This is something we are just starting to explore.

We've also started working with other exciting applications, such as handling, drilling, glue dispensing, and inspection, where several of the capabilities developed to assemble the IKEA chair can be applied.

Robotiq: Do you have any plans to commercialize the technology?

S-R: Yes; in fact, the team has been working on commercializing the technology for the past year. We are currently focusing our efforts on industrial applications that are pain-points in existing production lines, particularly in the high-mix low-volume sector.

Robotiq: Thanks again for speaking with us. It's great to see our grippers being used in exciting research work like yours.

S-R: Thanks for having me.

By Romy A Letourneau - September 23, 2019
END_OF_DOCUMENT_TOKEN_TO_BE_REPLACED