This time of year is when many of us start our new robotics projects. But beware! Don't fall into the trap of over-complicating your applications. 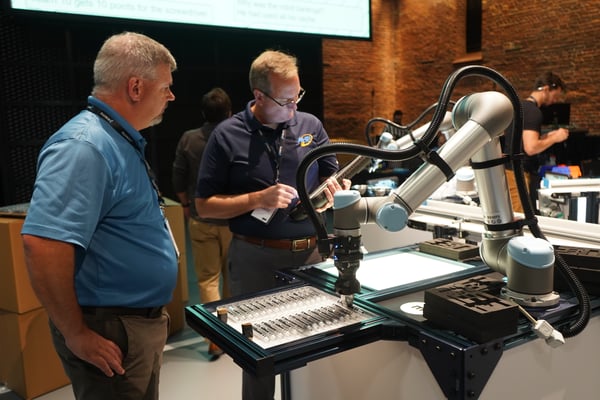 Complication is one of the biggest roadblocks to deploying robots.

"It's just too much work! It's too complicated!!!"

Have you ever heard yourself say this when considering a new project?

Many of us try to start new projects at this time of year. It's natural. With the New Year comes the promise of 12 new months of progress, productivity, and prosperity. We look at all the possibilities of robotics and we think "This year, I want a piece of that!"

The problem is that we often over-complicate things, especially when it comes to robotics. We try to take on too much at once and, as a result, we end up worse off than we were before.

Over the last 3 years, my New Year's Word (I don't do resolutions) has been exactly the same every year. That word has been: "Simplify."

If you want success in your robotics projects this year, I'd suggest that "simplify" should be your New Year's Word too. Because over-complication is one of the biggest roadblocks to deploying robots to your business.

Why we over-complicate robotics solutions

The world of robotics is filled with complex solutions to over-complicated problems.

When I was a robotics researcher, I saw a lot of projects which made me think "Why go to the bother of making a robot do that!?" Often, there was a much simpler solution to the problem which the researchers were trying to solve. For example, researchers might spend years developing a complex algorithm to allow a robot to pick up a badly placed object. When it was finished, the algorithm would still take 10 minutes to pick up the object. Better part presentation would have solved the problem instantly.

Of course, utility isn't always the point of robotics research, but it certainly is for those of us who want to use robots to improve productivity.

Unfortunately, this tendency to over-complicate problems is not limited to robotics research. It also turns up in industrial robotics. We tend to pick more complex problems and solutions without recognizing that simpler alternatives are available.

An Exercise: Try to solve this robotics problem

Here's a mental exercise that you can try :

Try to think of at least one solution to this problem before you read further.

The solution doesn't have to be perfect or detailed, just think of the rough steps the robot would make.

Give yourself 2 minutes maximum to think about it now.

How did you solve the problem?

Here's one example of the steps we could try to program into our robot arm. I think that many of us would choose a solution a bit like this one on our first try.

Pick up the pan with the gripper and place it onto to the cooker. Turn on the cooker ring. Open the box of eggs and slowly lift it out an egg (using the 3-Finger Gripper as it's best for spherical objects). Gently break the egg on the edge of the pan and open its contents into the pan. Put down the shell, pick up a whisk and make a whisking motion in the pan to mix the egg. Wait for the egg to cook. Put down the whisk and pick up a spatula. Pick up the omelet and place it onto a plate.

Was your solution as complex as mine? Or did you intuitively simplify the process?

I'm willing to bet that your solution was more complicated than it needed to be. This is normal. We think about how we ourselves would complete the task and we try to program the same sequence into the robot.

We often forget to simplify the task right at the beginning.

How the father of robotics would have solved this problem

I use the example of making an omelet because it is similar to one used by Joseph Engelberger — the inventor of the first industrial robot who is sometimes called the father of modern robotics.

An interviewer once asked him if he could make a robot which could manipulate and break an egg for cooking.

"[Yes you could do it] but the chances are you're going to use the egg as a fluid, not as an egg. You don't have to go through all that agony of doing that because you can buy [cartons of pre-cracked eggs]. Just take the fluid and pour it out."

Look again at my solution above. How many steps could I remove by simplifying the "part presentation" (i.e the form of the eggs)? Also, while we're working on simplification, there's no need for the spatula — the robot could just pick up the pan and flip the cooked omelet onto the plate.

With these two simple changes, I count that I could reduce the number of steps from 15 to just 10. Plus, the task would now require much less dexterity as the robot no longer needs to manipulate the egg or spatula. Plus, by making a custom-built pan handle, the task could even be achieved with a 2-Finger Gripper.

Engelberger took a hugely pragmatic approach to robotics, as I explained in an article we published about him when he died three years ago. If a simpler solution was available, he would pick it over a more complex one. The functionality and utility of robots was far more important to him than flashy technology.

This year, we should all take a leaf out of Joseph Engelberger's book and look for simple solutions to uncomplicated problems.

How to simplify any robotic task this year

How can you start simplifying your own robotic projects this year to ensure maximum success?

We created an eBook which explains everything! It guides you through all the steps to document your current manual process, formulate the automated process, and simplify it. Click here to get a copy of the eBook: How to Simplify a Complex Task.

Follow these steps — and resist the urge to over-complicate things — and you can be sure that your robotics projects this year will be the most productive yet!

Which applications have you over-complicated in the past? Tell us in the comments below or join the discussion on LinkedIn, Twitter, Facebook or the DoF professional robotics community.

By Romy A Letourneau - September 23, 2019
END_OF_DOCUMENT_TOKEN_TO_BE_REPLACED