It seems there are more startups than ever, but many of them fail to grow into their potential. Embracing modern technology could be a great way to help your company stand out.

Join us as we look at two case studies of startup companies that boosted their success by integrating robots into their manufacturing model.

At Voodoo Manufacturing – a company that creates 3D-printed models – they tripled their output by using Universal Robots with a Robotiq gripper.

Why this combination? They wanted to find a robot that could be programmed without too much difficulty, but would also be able to complete the tasks they had in mind for it. 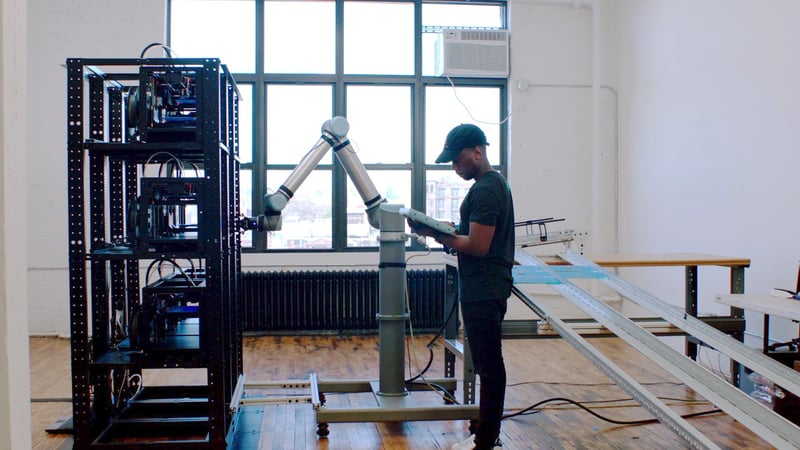 Voodoo Manufacturing tripled their output by using a collaborative robot.

They chose the Universal Robot UR-10 for its collaborative nature and excellent price point. The robotic arm is able to harvest and place plates into 3D printers, and the robot continues working into the night, even after everyone else has left.

With the Robotiq gripper, the robot pulls out models, places plates, and sets the printers to continue working. And thanks to the teach pendant, team members were able to program the robot without difficulty.

Best of all, the company expects the investment to pay for itself within six months.

Lowercase is an eyewear manufacturing startup in New York City. From the beginning, they wanted to automate as many of their tasks as possible. They chose a Universal Robot and one of Robotiq's 2-Finger Grippers to operate a CNC machine.

Lowercase quickly integrated a collaborative robot into their production process.

After just five days, the robot was able to operate the machine by itself. This allowed team members to focus on more important tasks.

The main obstacle they faced was that integration costs were 3-4 times more expensive than the robot itself. But by choosing a collaborative solution, they were able to quickly and efficiently integrate their new robot into the production process.

The solution they chose from Universal Robots is easily programmable, so they can make changes on the fly and still meet production needs for their 17 different styles of glasses.

Robots are being used to automate more and more tasks in modern factories. By taking on on work that's dangerous or boring for humans, robots are opening up opportunities for those same humans to perform more fulfilling work.

Not only are startups embracing modern robotics, but the need for robots has inspired the launch of new companies. Since major industrial robots are costly, smaller robotics startups are filling the gap by offering more affordable solutions with great flexibility.

This is a perfect example of how robots are creating new jobs and new industries. Startups in manufacturing should look to these examples to raise their chances of success.

By Romy A Letourneau - September 23, 2019
END_OF_DOCUMENT_TOKEN_TO_BE_REPLACED