News briefs for the week take a look at Ford’s embrace of AI for transmission assembly, monster 3D printers constructing houses and buildings, the benefits of marine robotics for offshore wind projects, “customizing” telepresence robots, RUNO as a Roomba on steroids, and precision welding coming of age in robotics.

Ford augments its robots with AI 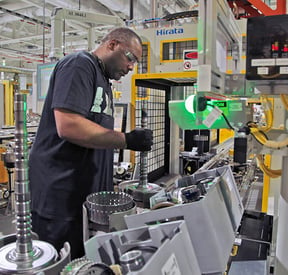 Ford has been assembling transmissions for years with industrial robots, but recently realized how to put more oomph into the process with artificial intelligence (AI). Now, the very same six-axis robots are more accurate and 15 percent faster.

Symbio Robotics (Emeryville, CA), with the slogan, “Symbio makes industrial robots do the impossible,” is the AI force behind Ford’s robots. “The robots are programmed and managed with Symbio’s robot-agnostic AI software platform, SymbioDCS,” which assists in the assembly of transmissions for Ford’s Bronco Sport, Escape and Edge.

COBOD, Denmark’s 3D robot, concrete printing company, showcased its construction prowess at the recent Climate Summit. Specifically, it was heralding its budding partnership with GE Renewable Energy for 3D printing concrete towers for GE’s wind farms. Surprising, even to themselves, COBOD crews printed the tower’s massive base in three days. 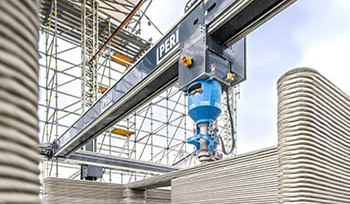 How about hurricane-proof, flood-resistant 3D printed homes for Florida, that are affordable!? Well, it’s happening. Printed Farms is already there, using a COBOD BOD2 robot printer to print a 784 square foot (71m2) storage unit. Next up, two 3D printed intercoastal villas in Florida. They say that using the BOD2 they are capable of producing 2000 square foot (180m2) floors on 3 stories for a 6000 square foot (540m2) building.

With post-COVID construction lumber skyrocketing to 300 percent and stick-built homes slow to construct, 3D robot printers stamping out concrete homes in a few days, may well be the start of the next construction boom.

With offshore wind farms (OWFs) being constructed further from the coast, maintenance and inspection with crewed vessels becomes increasingly risky, time-consuming and expensive. 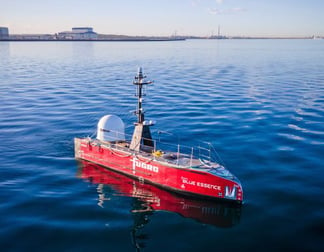 Over the life cycle of wind turbines, it’s critical to maximize uptime to generate as much energy as possible. As such, regular maintenance is vital yet costly.

The introduction of autonomous marine technologies could bring significant benefits over those of in-person inspections. “A key example is the design and development of unscrewed [i.e., no propeller] surface vessels (USVs) that can perform tasks in remote offshore locations while being controlled from remote operations centers (ROCs) as far away as in different time zones.”

With a wide range of capabilities from data acquisition to research, surveillance and marine exploration, “USVs are set to transform the maritime business and lay the foundations for a new way of working in the offshore wind industry.”

Dutch offshore services company Fugro, for example, will use autonomous vessels to carry out seabed surveys for the Danish Energy Island project in the North Sea.

Denmark’s Energy Island project, the size of 18 football fields, located 50 miles from the coast, is an artificial island that will serve as an offshore power plant generating electricity from hundreds of wind turbines. Wind turbines that would be more efficiently serviced and more cost-effectively maintained using autonomous marine vehicles. 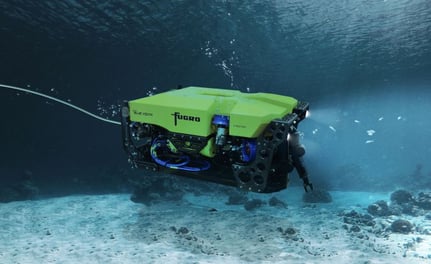 Virtual, 24/7 remote living and working has certainly been a boon to everything telepresence during the pandemic, but still, how does a robot differentiate itself in such a crowded field?

How about “customizing” your telepresence robot? That’s the solution from San Jose-based OhmniLabs.

With the company’s “customization” of its Ohmni telepresence robots, now called the Ohmni Modular Robotics Platform, “customers can design their robots from the base to the brains - adding exterior mechanisms and functionality that make these autonomous robots perfect for tasks like disinfecting offices, hospitals and airplanes, mapping virtual tours for real estate brokers, conducting security patrol, or greeting guests in reception areas.”

Asking price for a tricked-out telepresence robot from OhmniLabs: starting at $2,699

Roomba on steroids? The ViaBot sweeper

But it’s more than just a sweeper, says co-founder and CEO Gregg Ratanaphanyarat, who thinks building additional functionality into RUNO is a big plus.

“There’s often a thought that one robot can do one thing — robots are fine for a single function,” Ratanaphanyarat said. “However, it’s possible to make robots do more. The industry needs to start making robots more efficient.”

As such, the Sunnyvale-based ViaBot sweeper also doubles as a security guard.

The robotics startup has VC believers, including Baseline Ventures, Morado Ventures, Grit Ventures and SOSV, who have ponied up $6.1M in funding. 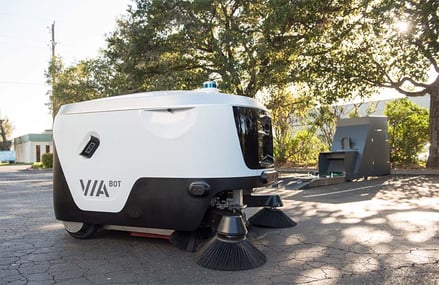 Robot solution to shortage of welders

The American Welding Society, is warning that the industry “will encounter a shortage of about 400,000 welders by 2024.”

Rushing to fill the void are companies like Path Robotics, the Columbus-based AI and robotics company, that claims it’s “the only company in the world offering turnkey, robotic welding systems capable of autonomous welding.” 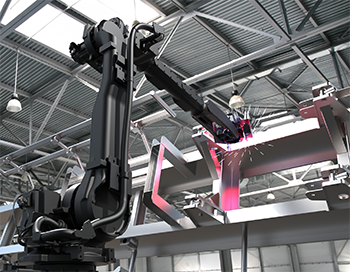 The company asserts that “their technology was designed to ensure no system programming [required] and requires ‘no perfect parts.’ Through proprietary scanning and computer vision technology, the system can see and understand nearly any part it's given with the ability to self-adjust for each unique part.

"It analyzes where a weld is needed and generates all the planning to execute a clean weld nearly instantly. The system was designed to operate precisely in a manufacturing environment and with highly reflective materials.”

Andrew Lonsberry, CEO of Path Robotics, adds emphasis, saying: "Current industrial robotics have very little ability to understand their environment and the task at hand. Most robots merely repeat what they are told and have no ability to improve themselves. Our goal is to change this. The future of manufacturing hinges on highly capable robotics."

To carry out that future, Lonsberry and Path have believers. The company announced it received $56 million dollars in Series B funding, bringing the total invested in the company to $71 million.