In a welcome return to cobot headlines, Rethink Robotics GmBH unveiled a new cobot this week.  The Sawyer BLACK Edition --an upgraded version of the existing Sawyer cobot-- has new components designed to overcome some of the problems with elastic actuators and other issues that plagued the original.

Many specs (including payload and reach) remain the same but Sawyer BLACK is said to be quieter, more accurate, more durable and slightly faster than its predecessor. 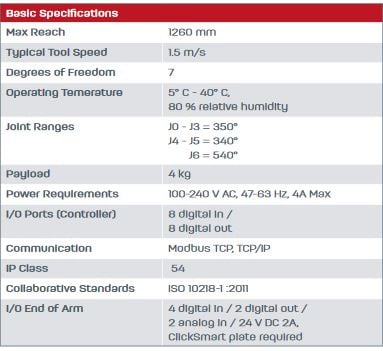 It's a remarkable return for Sawyer after a tumultuous year for Rethink Robotics, which saw the company close, several employees move to Universal Robots, the sale of IP to Hahn Automation and the announcement of a new CEO.  The Robot Report (which has been following this story since the beginning) is the best place to follow the dramatic re-emergence of Rethink Robotics as a player in the industrial cobot market.

Researchers from South Korea's Institute of Machinery & Materials unveiled a robot teaching tool, Tuesday, that can be used to adjust and program movements on industrial robot arms.  The device is designed to be intuitive and easy to use, thereby enabling non-experts to program bots in industrial facilities.

When the robot-teaching device is connected to a robot arm, workers can control the robot using a specially designed wireless mouse. The robot will then analyze the movement of the mouse to mimic the actual movement of workers. The device weighs less than 500 grams (1.1 pounds) and does not intervene with the movement of a robot arm.

The mobile medical/lab cobots keep on coming.  UniteLabs, Astech Projects and Roche E2E lab services unveiled a mobile cobot this week that's designed for use as a lab assistant.  Available for purchase and rental, the cobot comes with autonomous capabilities that enable it to work through the night...

In the future, manufacturing of large structures from airplanes to space settlements could be performed by swarms of small bots designed to perceive themselves as part of the structure during the material handling and construction phase.  This week, researchers at MIT unveiled a proof-of-concept system built on that principle.

while most mobile robots require highly precise navigation systems to keep track of their position, the new assembler robots only need to keep track of where they are in relation to the small subunits, called voxels, that they are currently working on. Every time the robot takes a step onto the next voxel, it readjusts its sense of position, always in relation to the specific components that it is standing on at the moment.

In a collective triumph for robot arms, interplanetary teleoperation systems and the ingenuity of human engineers, NASA announced Thursday that the the 'mole' instrument on its Mars InSight rover is no longer stuck and has tentatively recommenced its journey through the Martian topsoil.

Need some help?  The probe's robot arm is assisting the 'mole' with its digging mission.  Credit: NASA/JPL-Caltech

Over the weeks and months, engineers devised a backup plan: To help, the robot arm on the InSight lander is pressing against the drill to create enough friction for it to keep digging [...] "When we first encountered this problem, it was crushing," said the Jet Propulsion Laboratory's Troy Hudson, who is leading the recovery effort.  "But I thought, 'Maybe there's a chance; let's keep pressing on.' And right now, I'm feeling giddy," he said in a statement.

Last time we checked in on Russia's Fedor humanoid, it was tucked away in a box and seemed most likely to make its next appearance in some space museum somewhere.

Well, not so fast.

Russian state news service RIA Novosti revealed this week that Fedor may get a second lease of robot life as a particularly cool-looking lunar rover.

With a swagger and a roll, Fedor is reimagined as a lunar explorer.  Credit: Roscosmos

[...] the country plans to send a vehicle to the Moon in three or four years that has a humanoid torso and the body of a rover. Yevgeny Dudorov, executive director of the Russia-based robotics firm NPO Android Technique that built Fedor, said this centaur-like robot would represent the vanguard of animal-like robots with wheeled bases sent out to explore the Solar System.

1. The team at OpenAI revealed this week that it has trained a pair of neural networks to solve a Rubik’s Cube using one human-like robot hand.  But the system remains a work in progress: it successfully solves the Rubik's Cube 60 per cent of the time (a figure that drops to 20 per cent for so-called 'maximally difficult scrambles').  (H/T Wired)

3.  Meet Pepe --a social robot developed by AMMACHI and the University of Glasgow.  Designed to teach hygiene skills to youngsters, in one test the teleoperated bot reportedly increased levels of handwashing with soap by 40 per cent.

4. The UK's South West Nuclear Hub released an interesting video this week showcasing a selection of the automation technologies being developed for waste management, decommissioning and radiation mapping.

5.  Engineers at the Singapore University of Technology and Design released video of its impressive ORION bots this week.  ORION is a bio-inspired, scalable and mobile multi-robot system designed for use in "intelligence, surveillance and reconnaissance operations."