It emerged Monday that drinks giant Carlsberg has practically "eliminated the risk of accidents" in its Fredericia, Denmark facility following the introduction of UR3 and UR10 collaborative robots.  The company has achieved "zero incidents" since the cobots arrived and has purchased four more cobots to further enhance production processes.

Thomas Kern Ruby, senior project manager at Carlsberg Fredericia [...] says: “Although our production line was highly automated, it still required some degree of human input [...] mainly during the packaging process which saw our workforce manually carrying packaging cartons from the pallet to the magazine. This was a monotonous and strenuous task and often staff endured repetitive strain or sustained severe cuts while removing the packaging cable.”

On Thursday, Universal Robots declared January to be 'National Cobot Awareness Month.'  "[We] want to send a signal to manufacturers that cobots are here to solve the monotonous tasks they simply can’t staff," said Stu Shepherd, regional sales director of Universal Robots Americas division. "With an average payback period of only six to eight months due to increased productivity, quality, and consistency, they can make their investment back and then some before year end if they start now.”

On Monday, car giant Ford announced plans to purchase two Digit humanoids for making home deliveries.  The announcement follows a successful partnership between Ford and Agility Robotics, which began last summer and marks a major milestone in the commercialization of humanoid robots. 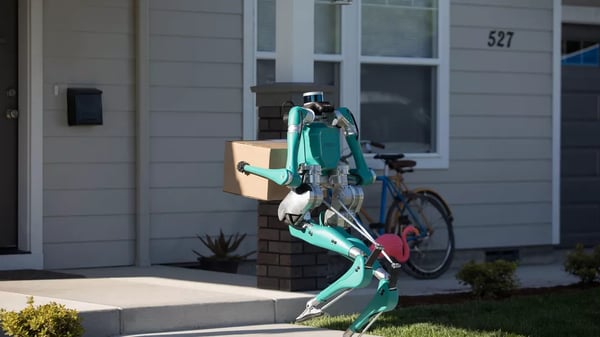 Digit is self-folding and could easily be paired with self-driving cars.  Credit: Ford

While Ford will take home the first two Digit robots, there's still a lot of research to do. Both companies said they'll continue to explore technologies to understand how Digit and Ford's autonomous cars can "talk" to each other and learn about their surroundings. The goal is to create a communications channel to keep out redundant information between a self-driving car and robot delivery person.

The world's largest technology exhibition, CES 2020, closes today in Las Vegas, Nevada and as always, the four day long event delivered a host of exciting --and sometimes ridiculous-- new automation and ideas to enjoy.  (CES also means videos galore, so we're going to make an exception this week and load up on videos from here on out!)

On Tuesday, as the show opened, Toyota announced sensational plans to build a prototype city on a 175-acre site in Japan, where people will live and work side by side with Toyota's autonomous e-Palette shuttles, domestic assistant bots and host of other bots and sensors.  Construction on 'Woven City' is set to begin in 2021....

And Charmin unveiled a domestic robot that you never knew you needed (until you do)...

1.   UBTECH's Walker bipedal humanoid, now on its third version, showed off its skills in a domestic setting at CES this week.  c|net's Lexy Savvides took a close up look.

3.  Russia's Robo-C bot (which also made an appearance at CES, see below) has been given some upgrades.  Snazzy video released by Promobot this week highlights some of the robot's capabilities.