News briefs for the week take a look at new AI-powered robots and cobots for machine tending and logistics operations, mobile UV robots for disinfecting passenger aircraft in 10 minutes, oil rig robot roughnecks entering the drilling industry, the Top 5 picks for countries winning the robotics implementation race for 2021 (and it’s only April!), and the outlook for global industrial robot sales (including peripherals and software) beginning mid-2021.

Closing the automation gap with cobots

80 percent of all factory tasks in the U.S. are performed by machine operators, with $650 billion annually spent on machine tending, according to a research article in Control Automation. Currently, there are 600,000 open positions for machine operators, and not 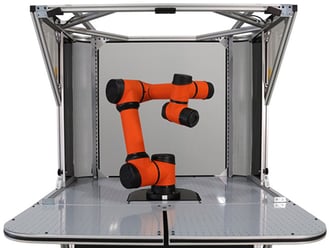 many workers are rushing to fill them.

Rapid Robotics (founded in 2019) has built its company at filling that gap with cobot work cells that it calls RMOs or rapid machine operators. “US manufacturers can’t hire machine operators fast enough,” says the U.S.-based company, “and until now they’ve had no viable way to automate the jobs either.”

So, for $25,000 per year, Rapid Robotics will supply one “pretrained robotic machine operator that understands how to perform common machine tasks without programming or systems integration…a complete software and hardware solution that combines proprietary machine vision and deep learning AI with proven robotic hardware to handle most machine operator jobs ‘out of the box.’”

Over 50% faster than manual labor!

Another U.S. developer powering robot arms with AI is Ambi Robotics, formerly Ambidextrous Laboratories, co-founded in 2019 by UC Berkeley’s Ken Goldberg. Emerging from stealth mode in March of 2021, with $6 million in seed funding, the company will utilize its AI-powered grasping tech to simplify logistics’ most challenging jobs, like bin picking and automating Put Walls.

Dex-Net “trains robots in hours, not months,” claims the company, “10,000x faster than collecting data in the real world.”

The company’s twin AmbiOS software offerings: 1. AmbiSort that sorts for Put Wall shelving from mixed bulk inflow; and 2. AmbiKit, for basic grasping and kitting functions, are, according to the company, “over 50% faster than manual labor.”

For the robot curious: Just three months into 2021, Analytics Insight is out with its picks for which countries are leading the robotics implementation race so far this year (it's only April!).

“The proliferation of robotics has begun well,” opened the report. Here are the five picks. Get the full rundown: Analytics Insight

The Bureau of Labor Statistics tabs oil rig roughneck as the country’s third most dangerous job, with American and Russian roughnecks the world’s most endangered among their peers. It’s not too hard then to imagine a time in the near future when oil rig work will be totally automated. 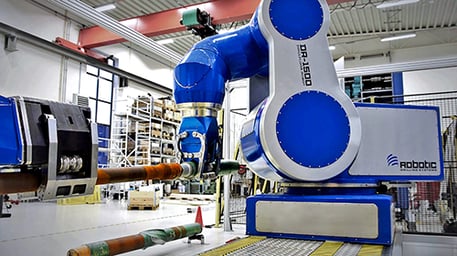 A March 2021 report from Rystad Energy concluded that existing [automation] solutions could replace hundreds of thousands of oil and gas jobs globally and reduce drilling labor costs by several billion dollars by 2030, “if there is an industry push for such a transition.” Robotic solutions have already been introduced successfully in drilling operations, with companies such as Nabors [Drilling], deploying the Electric Robotic Roughneck and Electric Floor Drill (from Norway-based subsidiary Canrig Robotics Technologies).

“Despite the huge potential of robotics, operators should be aware that these savings will be partially offset by the considerable investments required for the adoption of these solutions, which may vary depending on the cost structure and whether the robots are owned or leased,” says Sumit Yadav, energy service analyst at Rystad Energy. 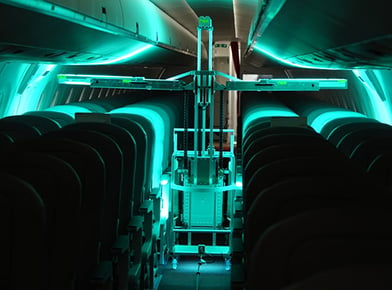 Mobile, COVID-blasting robots have become a familiar sight during the year-long pandemic. Now a Swiss robot maker, UVeya, has come up with an ultraviolet disinfection solution for passenger aircraft to protect millions of global air travelers.

UVeya claims that its fully automated disinfection robot can be deployed in five minutes and can clean both air and interior surfaces of an aircraft in ten minutes.

Uveya tested the production version of the technology on the aircraft of Swiss regional carrier Helvetic Airways last month, effectively eliminating more than 99% of bacteria and pathogens, including COVID.