News briefs for the week take a look at a robot solution for retail out-of-stock’s massive $1 trillion inventory problem, smart robots sorting dumb trash, life-changing wearable robots for the knee and hand, a subsea robot that morphs between AUV and ROV, and speeding up novel chemical discoveries with AI and robots working together.

Talley the robot gets fired, and then rehired 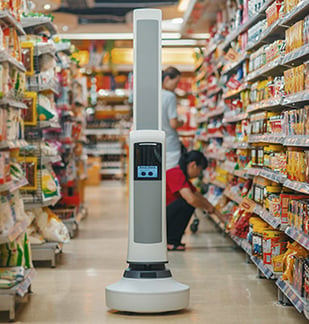 In Asia/Pacific, it’s worst at $520 billion in lost sales annually; North America $145 billion, with EU+M/A $190 billion. With “Empty shelves (encountered by 32% of shoppers)”, Tally presents itself as a viable solution. Walmart was a believer. With 10,500 global stores, Walmart experimented with Tally, but then abruptly fired the robot in February. Neither Walmart nor Simbe Robotics, Tally’s developer, offered a convincing reason for the dismissal.

Tally wasn’t unemployed for long. Save Mart Companies (204 stores) and Schnucks (60 stores)—with an average of 35k items per store—recently welcomed Tally with open arms. The chain stores hope to recoup what each sees as totally unnecessary loses due to out-of-stock items.

The intricacies of correctly sorting recyclables from trash can be a daunting task for a robot. Done right, it can be worth millions. Contaminating one type of recyclable with another, say, mixing aluminum cans with plastic bottles or vice versa, can ruin the true 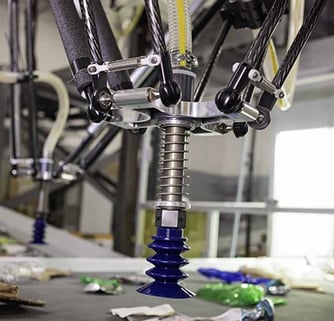 AMP Robotics (Colorado) claims that artificial intelligence, as its AMP Clarity software is showing, can readily apply intelligence to trash recycling with a high degree of accuracy. It’s what AMP describes as Clarity’s “material characterization capabilities” at preventing the loss of recyclables to landfill.

“AMP’s new software captures data on mixed plastics like PET, HDPE, LDPE, PP, and PS; aluminum recyclables like used beverage cans (UBCs); and fiber, such as corrugated cardboard (OCC) and sorted residential paper and newsprint (SRPN). Material data is collected, classified, and sub-classified so materials recovery facilities (MRFs) can see what recyclables are flowing through different stages of their operation.”

Keurig and Dr Pepper are customers. In early April, the system was deployed to Evergreen and its parent company Greenbridge.

Wearable robots—exoskeletons—offering evermore relief to those with challenging mobility problems. “More than 20 percent of the 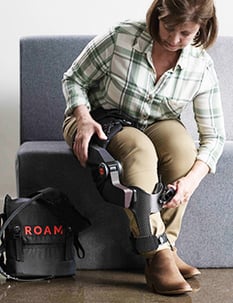 global population is limited by their body’s mobility,” with the Lancet reporting that of that number approximately 143 million have OA (osteoarthritis of the knee). OA, over time, can be severely debilitating, many times requiring surgical knee replacement.

A robotic, AI-infused knee brace developed by Roam Robotics (San Francisco) utilizes AI for an adapted technology that senses the wearer’s movements and adjusts accordingly. “Roam is focused on a massively underserved market,” says co-founder and CEO Tim Swift. The robotic knee brace uses “embedded sensors that can detect things like movement up and down stairs and standing up from a seated position. It utilizes a power source and air compressor to create motion to assist in movement.”

Recently registered with the FDA as a Class I medical device and officially named the Ascend wearable robotic orthosis, the device will start shipping in the summer (2021). 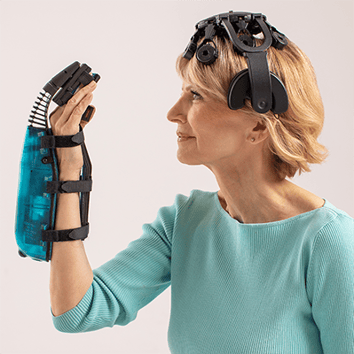 For millions of people the loss of the use of one or both hands is an all-to-frequent effect from stroke. “At 6 months after severe stroke, one third of people develop wrist and hand contracture (loss of passive joint range of motion) and more than 50% of people with hand impairments do not regain function.”

The FDA just authorized Neurolutions’ IpsiHand device to help stroke patients regain movement in the arm, wrist and hand through use of a brain-computer interface to re-educate the muscles.

The new device leverages brain-computer interface technology to assist chronic stroke by utilizing the uninjured, or ipsilateral, side of the brain to improve arm and hand function.

Versatility is always a nice quality to have in any robot.

The Aquanaut from Houston Mechatronics (Texas) is a subsea, “artificial intelligence-powered robotic system” capable, as the

When performing intricate tasks in its ROV mode, the Aquanaut uses another company-developed system called the Olympic Arm, which is automated arm hardware capable of performing tasks underwater using a variety of tools. Triumph Subsea Services has ordered 26 of the all-electric Olympic Arms for its growing fleet of ROVs.

Nic Radford, co-founder, CEO and CTO at Houston Mechatronics, previously led NASA’s humanoid robotics efforts for the International Space Station. He says that the company is on track to deliver nine of its robotics products to commercial and government customers in the next 12 months.

Kebotix (Cambridge, MA) uses artificial intelligence/machine learning (AI/ML) and robotics to speed up the discovery of new chemicals. Specifically, ways to accelerate the synthesis of new molecules, which is of great interest to the German chemical giant Bayer R&D, especially its agricultural R&D.

Farmers worldwide are losing as much as 50 percent of their crops to weeds, insects and diseases. Bayer says accelerated synthesis, through work with Kebotix, will allow their scientists to gain speed and precision with innovative technologies to harness the immense potential of AI.

Dr. Jill Becker, Kebotix CEO and founder, is looking forward to the union. “Early phase projects often have unexplored chemistry which requires a lot of time to find its best or most effective use,” she says. It’s her hope that Kebotix’s self-running lab can optimize chemical reactions to speed discoveries.