Which NASA JPL robot will contend in the DARPA Robotics Challenge?

We have been pleased to learn that a lot of the DARPA challenge teams will be using our 3-Finger Adaptive Gripper for the final that will be coming up in California next June. Like many teams that have built different prototypes with different options, the NASA based team has fluctuated between 2 of the models that they are working on.

Both prototypes, RoboSimian and Surrogate, are designed and built at NASA's Jet Propulsion Laboratory in Pasadena, California. It was a difficult choice the team had make to choose between the 2 robots and decide which one would represent them at the Challenge. Both robots have good qualities and of course they also have downsides that make the choice quite intense for the JPL team.

The Surrogate is a more human-like robot. The robot stands vertically, has 2 arms and is able to handle objects with ease. It has an advantage in this challenge with its ability to handle many different objects since the challenge has a lot of dexterity challenges. Opening doors, handling a power tool, shutting off a valve are among the tasks the robots will need to execute. Surrogate was the perfect candidate to use a 3-Finger Adaptive Gripper. Since the Robot Gripper was designed for handling; the flexibility of the Gripper and it's high force to weight ratio made it the gripper of choice for this challenge. However, ''Surge'' is propelled by tracks, which complicates its maneuverability. In fact, some challenges have to be done on uneven ground and even on ladders...which can't be done with this kind of track propelled robot. Also, the robot only has 1 pair of ''eyes'' which allow it to see linearly and not all around its ''body''.

"Surge and its predecessor, RoboSimian, were designed to extend humanity's reach, going into dangerous places such as a nuclear power plant during a disaster scenario such as we saw at Fukushima. They could take simple actions such as turning valves or flipping switches to stabilize the situation or mitigate further damage," said Brett Kennedy, principal investigator for the robots at JPL. 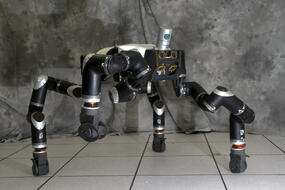 The other prototype is a more ''ape'' shaped robot. In fact, with its four limbs, the robot stands in a more horizontal position than its mate. The robot uses its ''arms'' to propel itself and to handle objects. This is the major reason why the 3-Finger Adaptive Gripper couldn't be use on the RoboSimian. This robot is relatively heavy and the Gripper wasn't designed to support this much weight on its knuckles or fingers. The gripper RoboSimian uses is more like a jaw that can be rotated when the robot is walking. Since the RoboSimian can execute the handling challenges and  also traverse the hazardous terrain (i.e. un-even ground, ladders, etc.) it would appear to be a more versatile contender for the totality of the DARPA challenges. RoboSimian also has seven sets of ''eyes'' which allow it to see from the front, back, sides and also under its body.

Both robots have LiDAR (Light Detection and Ranging). This hat-shaped device on the robot's head sends laser signals throughout the environment and can recreate a 3D map of its surroundings. Also, both robots are running almost the exact same code, so this feature makes no difference for the choice of robot to be used in the DARPA challenge.

"It comes down to the fact that Surrogate is a better manipulation platform and faster on benign surfaces, but RoboSimian is an all-around solution, and we expect that the all-around solution is going to be more competitive in this case," Kennedy said.

So handling wasn't the only argument NASA had to consider in making their choice between their prototypes when considering the competition. With the recent rules update of the DARPA Robotic Challenge, the point are really well split between the handling and maneuvering tasks. This will be very interesting to see RoboSimian maneuvering a car for example. However, it must be more points to be gained from getting through the hazardous terrain. In fact, all the teams have their ups and down sides, let's see who is going to be the best team. To learn more about the 3-Finger Adaptive Gripper and its applications, take a look at the following link.