The 6th edition of the trade show Automatica, held in Munich, Germany, is the spot to be if you are in the robotic, mechatronic or automation business. The show is in a couple of days. It starts June 3rd and continues on until the 6th. Several companies are anticipating this show as they will be launching new products or showing major upgrades to their existing technologies. Since this show is huge and there are a lot of exhibitors, we have prepared a list of the top 8 items that you should not miss at Automatica 2014.

A lot of robot manufacturers, new and old ones, are launching collaborative robots for Automatica. All these industrial robots will be incorporated into our e-book on collaborative robot, as soon as we have enough information and user feedback.

The Swiss company Mabi will present their brand new collaborative robot. This company is known for its big robotic industrial applications, they decided to level up and add a collaborative robot to their collection. We don’t have a lot of information on this new robot, but at first glance it reminded us of the collaborative robots from Universal Robots. This launch is very exciting, because having another collaborative robot on the market should mean that the price of all these robots will definitely drop as more and more robot manufacturers develop their own models. At the same time, we are working to get some user feedback for you as soon as possible.

The company Gomtec (former RG Mechatronics) will launch a new lightweight robot. Roberta is a lightweight robot with a built-in gripper and intuitive programming software. The interesting thing about Roberta is that its payload to weight ratio is impressive. At only 19 kg, it can handle an 8 kg payload. These features makes it easy to move around the plant or lab and it can still be used for a large array of applications. Roberta will also be available in 3 models: P40.600, P80.800, and P12.1200. You should definitely take a look at Gomtec's website as there are a lot of interesting devices that are also present on the robot arm.

The robot manufacturer F&P Personal Robotic seems to be very focused on small collaborative robots. The company hasn’t provided a lot of information about the P-Rob robot, but the available information tells us that the robot is supposed to be very easy to program with a user-friendly interface. The robot also has its own pincher style gripper. Since the opening on the robot gripper is quite large (60 deg.), it can handle large things such as 1.5L water bottle. As the company is supposed to launch at Automatica, we don’t have any user feedback yet. 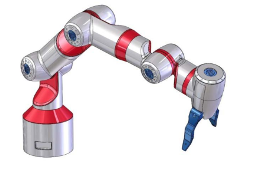 The service robot market has exploded in the last few years. If we think about collaborative robots and robotic applications, such as the exo-skeleton, the service robot world is huge. World Robotics 2013 estimated that approximately 94,800 new service robots will have been installed for professional use with a value of 17.1 billion US dollars in 2013. The goal of these robots is to take the human job to the next level by creating less dangerous motions and more efficient production. At the end of the day, the human is less tired and the work is done faster. Another feature of a service robot is its ability to reduce energy consumption. Servus Intralogisticis presenting the ARC3 robot which is a carrying robot that completely replaces conveyors. They are more flexible, better space savers and more energy efficient. A big part of the Automatica show will be dedicated to service robots. Take a look at the different applications out there and see if there is one that suits you.

The robot manufacturer KUKA is supposed to hit it big for this show. In fact, since it is their homeland, they are able to present a lot of robots that show what they are capable of doing. With a stand of 800m2, the German company is going to exhibit all of their knowledge concerning human-robot collaboration. KUKA is also going to display their new LBR iiwa, which is a lightweight robot that reaches new summits in the collaborative robot world. The company will also present the “KUKA Innovation-Award’’ during the show. This award is given to a team that made advancement in mobile manipulation. 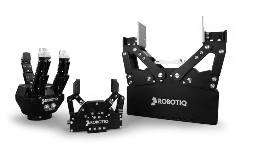 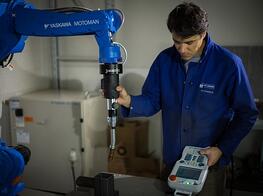 We are also looking forward to showcasing our Kinetiq Teaching product. This new product can help you to teach your welding robot, in a few seconds, via the intuitive teach pendant user interface and the ability to move the robot by hand-guiding it. This product makes the programming setup time negligible for most tasks. Kinetiq Teaching will be presented in the Yaskawa space (Hall B4, Booth 321). Come and see us and we will show you the advantages of agile manufacturing. Get the white paper on this robotic welding solution.

This consortium, as its name suggests, is made for Small and Medium Enterprises who want to incorporate robots and robotics into their company. Different applications are given to companies to optimize their tasks at a relatively low price. A lot of great applications are developed by this consortium and all of them will be exhibited at Automatica. Take a look at the following articles to get further information on each project under development.

Assembly tasks with a robot sensor. We have seen a lot of assembly lines integrate a lot of collaborative robots over the past few years. This project creates a certain ‘’flexibility’’ within the robot by adding force sensors.  This allows the robot to understand if the part is well aligned or if the screw is in the right hole, for example.

Collaborative welding. One of the things that scares managers when it’s time to talk about automated welding is programming time. As with Kinetiq Teaching, this technology aims at reducing downtime due to robot programming. This solution would also enable an operator with less welding knowledge to program a welding robot. The development of this technology shows how making robotic welding programming easier is an issue in the industry.

Cooperative dual arm robot. As robotics is the technology of the future, companies are trying to incorporate dual arm robots (instead of single arm robots) into their assembly line.

Pick and place robot. This project includes a robot that assists a specialist in fancy tasks. As the robot can not do the specialized work, it is more like a handyman or an apprentice. You make it do the tasks that you don’t really want to to do or that doesn't require much skill. Apparently this project has such a short setup time that even ten repetitions of task would be worth teaching the robot.

Collaborative machining. Using 2 different kinds of robots that can learn from their past experiences can be useful in machining. Since robots can calibrate themselves and learn, it is a good way to reduce mass production while avoiding incorrect programming.

Intuitive robot interfaces. Most robots are quite hard to program, however, this device allows you to have access to an easy programming method.

The Service Robotics Masters is designed to promote the emerging service robotics market by eliciting and rewarding commercial products and start-up companies. Six finalists have been selected for the final round which takes place at Automatica. Among the finalists let's mention Artiminds Robotics GmbH - coexhibitor with Robotiq - who has developed a software that makes programming of complex robot manipulator motions fast and intuitive. The 2-Finger Adaptive Robot Gripper- 85will be featured in this demonstration. Drop by Hall A4, Booth 235E to meet the finalists and don't forget to attend the award ceremony on Wednesday, June 4th at 4:15 pm.

Even though this type of robot is not well known in the market, it doesn't mean that you have to underestimate it. In fact, one third of all service robots sold in 2012 were for farming applications. From robots that feed animals to autonomous vehicles, these robots really help farmers have a more efficient day at the office or in the filed. Take a look at the different applications that will be showcased at Automatica—there is a lot of interesting stuff here!

To conclude, these are just a few of the products that will be showcased at Automatica. Many robot manufacturers and integrators will be there to demonstrate what’s new from their perspective. In fact, there will be more than 690 exhibitors from 40 different countries.  If you are in the robotic industry and you are not going to the show this year, you will have to wait two years to catch the next one. Stay tuned and check out what the show will be bringing to the market this year.