Future robotics are about humans and robots working safely alongside each other. In order to develop systems that allow this kind of interaction, a lot of research is being conducted around the world. Here in Canada, the Robotics Lab at  Université Laval  is working on several projects related to human-robot collaboration. We found one prototype particularly interesting and wanted to talk about it.

This project is led by Marc-Antoine Lacasse a graduate engineering student. He developed a partially static balanced 7-axis robot arm. This prototype was built to test a new static balancing technique. It will also be used as a platform for further human-robot collaboration research.

The two main components of the system are the robotic arm itself and the balancing bench. This last component is really important because it provides the pressure required by the diaphragm cylinders inside the arm to passively support and actuate it. When the robot arm is moved around by hand, the bench will compensate for the force of gravity by adjusting the pressure in the cylinders of the arm. The fluid used in the system is water. An extra weight is used on the bench and it is mounted on a rail. By adjusting the length of the lever with this weight, the bench can also compensate for the weight of any object picked up by the arm. In order to interact with its environment or grab objects, Robotiq’s 3-Finger Adaptive Robot Gripper was used for this prototype. More information about the prototype can be found on the laboratory website: 7-DOF Statically Balanced Prototype.

We asked some questions to Marc-Antoine to learn more about his project and the future use of it.

According to you, what are the programming needs in the industry?

I think that the industry would like their employees to be able to work with robots and even program them without having to hire a specialized programmer. Also, the employees should not have to go to their desk in order to reprogram a robot. It would be very interesting for them to do it right on the assembly line. The programming itself should be easy and done by demonstration.

How does the programming work on your prototype?

Being statically balanced, the robot can be moved by hand without any help from the motors. However, the encoder is still receiving power and still sends the position of the joint to the program that records the trajectory. When the demonstration is finished, the motors are re-powered up and the recorded positions are sent back to the joint. 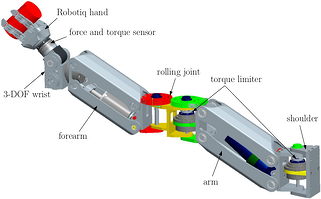 This summer, further development will be made to prepare an interface for editing the trajectory. It will be possible to visualize and edit the trajectory in 3D.

What are the industrial applications for this kind of robot?

This robot could be use to manipulate heavy objects on assembly lines, but you would have to compensate for the weight of the objects that are being picked up.  You could apply this to automotive components such as motors, dashboards, etc. There is no need of deep programming in these cases, because the intelligence comes from the operator and not from the robot.

What are the main features of your prototype?

Will this technology be available for industry in the near future?

Up to now, no special arrangements have been made to commercialize this technology. However, an article was published for ICRA 2013 on diaphragm cylinders similar to the one used in this prototype. This technology is in the public domain and can be used in many applications.

Here is a video showing the programming of this prototype:

Robotiq would like to thank Marc-Antoine Lacasse for taking the time to answer our questions. It is very interesting to see how fast robotics are evolving nowadays. We will stay on the lookout for further developments.

By Romy A Letourneau - September 23, 2019
END_OF_DOCUMENT_TOKEN_TO_BE_REPLACED