According to a recent Wall Street Journal article dated January 19th,2011 by James R. Hagerty, U.S. manufacturing... “has begun creating more jobs than it eliminates for the first time in more than a decade.”

This article talks about how U.S. government data showed that last year the number of manufacturing jobs in the U.S. grew 1.2%, or by 136,000 jobs, which registered as an increase for the first time since 1997. This is obviously great news for the manufacturing sector!

Mr. Hagerty showcases some major companies like Whirlpool, Caterpillar, and Dow Chemical and the decisions they have made to build new manufacturing plants in the U.S. instead of shipping these jobs overseas. Some of the reasons allowing these companies to stay put instead of moving abroad include: a safe social environment, available skilled labor and tax incentives from all levels of government, including a tax incentive that was recently approved by the U.S. Congress, which allows for new deductions of certain types of investments. Mr. Hagerty notes some companies (ex.Whirlpool) have “rediscover that it makes sense to produce some products, ... at home rather than shipping them long distances” taking advantage of lower freight costs. So there are really many factors involved in the decision to keep manufacturing plants in North America, but the good news is that the balance seems to have finally tipped in the direction of reinvesting in manufacturing.

The following graph shows the increases in productivity, output and hours registered by the U.S. Bureau of Labor Statistics between the fourth quarters of 2010 and 2011. 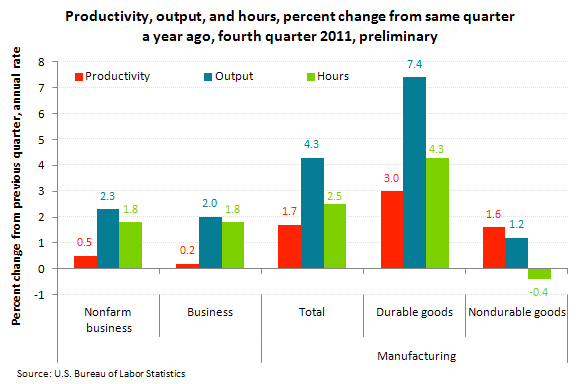 The WSJ article also quotes market analysts Mark Zandi of Moody's Analytics forecasting “manufacturing job growth to average about 2% a year through 2015.” and “to be a significant source of job growth over the next decade”. He predicts that U.S. manufacturers while still investing overseas for overseas markets will also invest in U.S. Plants for U.S. Markets.

While lauding the good news of increased manufacturing jobs the article is still wary of claiming new sustained job increases and notes that some of this improvement is dependent on a more widely sustainable economic recovery. Increasing support for research and development in manufacturing is mentioned as an important way to further support these job increases.

Interestingly the type of jobs expected to be increased at the new Whirlpool plant in Cleveland, Tenn will be for assemblers. This position is ideal for working more closely with robots, since they can help in the more tedious and dangerous maneuvers necessary to assemble different products. Here is where increased R & D could have an important impact on the quality of manufacturing jobs in the future.