Behind the Artist, an Engineer: Annick Mottard’s Story

Sensitive and scientific, with both an artist and engineer’s brain, Annick Mottard took a winding path to robotics. That journey and her multi-faceted personality seem built into her diverse role at Robotiq.

Today, Robotiq counts more than 70 full-time staff, and our Grippers and sensors operate in 40 different countries. For more than a year now, we've been telling the stories of our team members.

In her travels abroad, Annick Mottard walks company partners through products and, at the company’s HQ, writes manuals and conducts training sessions for colleagues. She performs customer service tasks, fielding queries from clients, and has built up a library of product knowledge, often gained from having buttonholed developers for as much technical information that she could tease out of them. As an engineer, she feels a sense of duty to point out any improvements in the system and uses her creative side to brainstorm workarounds with her team. She is as comfortable approaching the marketing director as she is the CTO, giving them her take on details that intersect their domains.She jokes that her job title should be what you see at the bottom of most job descriptions: “… and all related tasks."

Annick Mottard may have been a born engineer, but it wasn’t always obvious to her or her family. While she showed classic early traits – a natural ease with physics and math – she also loved art. In everyone’s eyes, it was her brother, five years her senior and more of a classic left-brain person, who was the future engineer in the family. She seemed to be harder to peg. As a kid, she loved to build and rebuild Lego houses with her brother and announced she would be a “researcher,” but also adored Barbies, reading and spending days painting with her grandmother, an activity that would loom large in her teen years.

She also loved spending early childhood days at her mother’s office, an occupational therapy clinic in her native Quebec City that doubled as a play house for young Annick. It was equipped with a kitchen, bedroom and all kinds of implements to help those with certain injuries and conditions re-learn motor skills. “For them it was rehab. For me, it was a whole bunch of toys.”

She grew up surrounded by science, from her mother’s occupational therapy to her father’s traffic-management work as a civil engineer, and from her brother’s studies in engineering to her own innate abilities. But in her teen years, she rejected that and chose to focus on painting. “I wanted to do my own thing and break away from my family.” She painted all the time and her pieces took on dark themes. “Sometimes my mom would look at it and ask, ‘Are you okay?’” 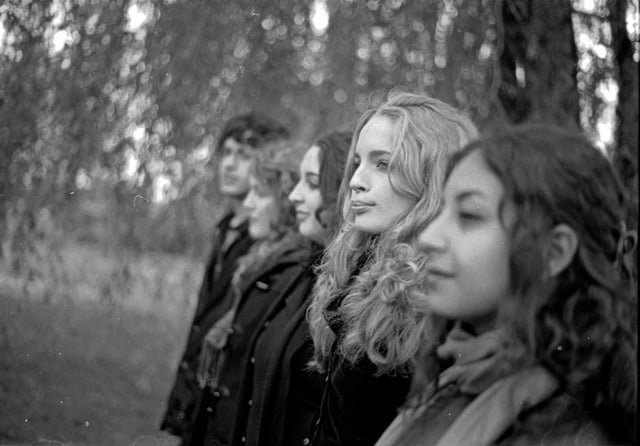 Just as she was finishing high school, she was admitted to hospital with a bad bout of mononucleosis. That difficult time got her rethinking about painting as a career choice and regretting that she had rejected physics and math courses, necessary prerequisites for pursuing the sciences. Not long after that, she spotted a brochure for a three-year technical degree in orthotics and prosthetics at a Cegep (Quebec’s junior colleges). Here, she thought, was something that did not require advanced mathematics and had both a manual and drawing component.

She enrolled in the program and, like her mother, was providing therapeutic help to individuals; they ranged from those needing simple shoe supports to amputees requiring prosthetic feet. The artist in her was getting to draw the human form and make plaster casts. The engineer in her was seeing how easy it was to understand the physics and mechanics of the work.

One day, a professor told her that she’s really smart and could go further. Something clicked. Annick decided she needed to study engineering. After a year and a half in the college technical program, she was determined to fulfill the potential that she and others had seen in her. Underneath that artist and the orthotics trainee, there seemed to be an engineer dying to come out.

Annick suddenly became very single-minded. Her goal was to get into a university engineering program. She would need nine pre-requisites.

“I remember going to my Cegep counsellor and she asked, ‘”Why do you want to do those math classes?’ And I said, ‘Well, right now I’m doing this technical school and then I’m doing engineering. But I have to do high school math and physics. And then I’ll have to do Cegep math. Then to get into university I’ll still have to do Cegep chemistry and physics from Cegep.’ She looked at me like I was crazy. ‘You know, that’s a lot of work to take on.’” All she could say was, “Yes.”

It was at that time that Annick took up cross-country running, a sport she still does today and one that had been part of a number of outdoor sports activities in which she and her family would do together. 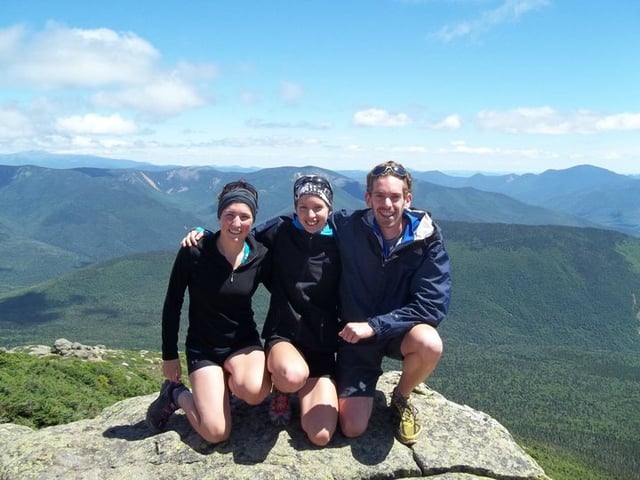 Her determination paid off and she was accepted to Laval University in mechanical engineering. Like all young women studying engineering, she found herself in a field dominated by men but says her fellow male students never made her feel any different. “There was no competition between us. And teachers treated us all as equals. There was no favouritism,” but then added jokingly. “Maybe some favoured the girls – so I didn’t complain.”

And being a female engineer takes on a special significance in a province that experienced the École Polytechnique Massacre, a targeted shooting of women at the Montreal engineering school on Dec. 6, 1989, which resulted in 14 deaths.“It still hits home because those girls were pioneers,” says Annick. “On that day I always take some time to think about those girls.”

She landed an internship in the renowned robotics lab of Laval Prof. Clément Gosselin. Her prosthetics studies at college had gotten her interested in doing research on rehabilitation. One of Gosselin’s projects happened to be a prosthetic hand. Annick had been excited about the work, as she felt she was bridging the divide between engineers and occupational therapists. 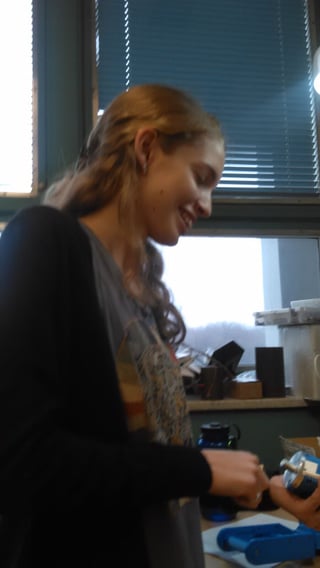 But as she became a researcher, just like the young Annick had predicted, she realized that the work was too sedentary and changed too little for a people person and lover of variety. She felt the same way for the software development job she did after graduation.“Okay, being a software developer is not for me and being in research is not for me,” she had said to herself in spring 2016, unsure of her next move. Sitting in front of the computer, she happened to see a posting for a technical support job at Robotiq. She thought that working with clients would be much more dynamic. She was interviewed by Technical Support Director Étienne Samson and was immediately hired. 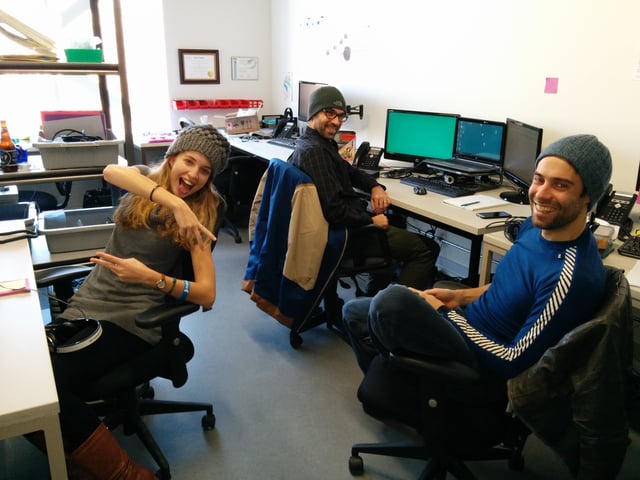 Annick got her first clue that the job involved much more than just client queries after she was asked – on her first day, no less – to design an Adapter that would allow the two-finger gripper to be employed on a robotic arm not normally used. Early days on the job were spent trouble shooting with customers. She then got involved in technical documentation, which began to include training.Her job now revolves around documentation and training.

For the former, she finds out as much as she can about any technology coming out of R&D and puts together material for her colleagues to understand the products; for the latter, she travelled to Asia and Europe, holding technical trainings and workshops with distributors.

She arrived at Robotiq star-struck by those about whom she had heard so many stories. She admits with some embarrassment that her first words to office mate Louis-Alexis Allen Demers, who led many of the innovations at Robotiq, including its vision systems and force torque sensors, were “It’s an honour to meet you.”

On the job for a year and a half, she’s become more confident and speaks up if something is not working to its optimum. “I feel, more and more, that I’m finding my place here, and that there is a place for my opinion.” Her strength is spotting the missing links in the system, seeing the big picture and seeing who she’ll need to talk to make an improvement. That might just mean going up to a senior manager like Karine Simard in Marketing or CTO Jean-Philippe Jobin. “I will go directly to the right person to avoid any delays.” She has also kept her hand in academia, having recently co-authored a paper with Prof. Gosselin on design improvements for a prosthetic gripper.

Her competitive running stopped during university, when it no longer felt right.She now runs in the woods for the fun of it, and for brief moments she finds herself closing her eyes ­– it gets her in touch with herself. She’ll sometimes join the lunch run or meet up with some of the others on a bike trail. Other times, she’ll grab her paintbrushes, the abstract painting helping her turn her brain off and “just go with the flow.” 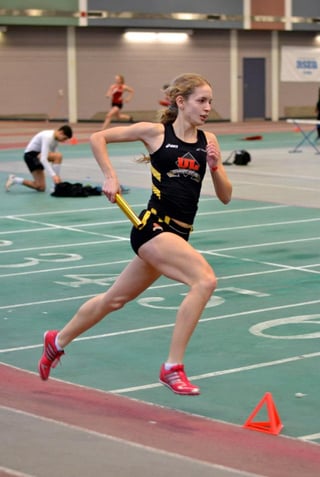 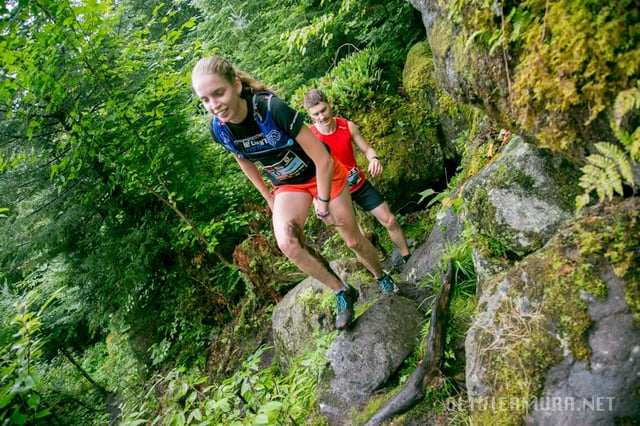 Winding trails in the woods and abstract images that flow are apt metaphors for her ability at work to take what would otherwise be individual silos of activity and find their relationships. Her personality seems to embrace the unpredictability of work and life, and she has shown that what Robotiq ordered, an engineer that sees the shop floor from a wide angle, is exactly who it needed. 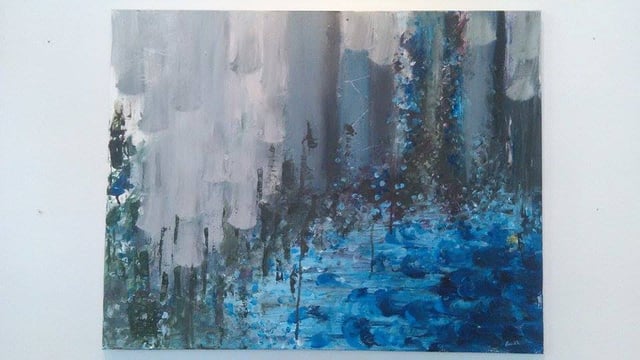 By Romy A Letourneau - March 6, 2019
END_OF_DOCUMENT_TOKEN_TO_BE_REPLACED

By Romy A Letourneau - February 27, 2019
END_OF_DOCUMENT_TOKEN_TO_BE_REPLACED

By Romy A Letourneau - February 20, 2019
END_OF_DOCUMENT_TOKEN_TO_BE_REPLACED