Using a cobot from Universal Robots fitted with a Robotiq gripper, engineers at the University of Leeds have created an ingenious system that enables cobots to learn physics-based object manipulation in cluttered environments.  Their approach, which combines automated planning with machine learning, allows the cobot to generalize based on existing knowledge and to plan ahead using a physics simulator.

"[...] cobots aren’t very good at what humans do very well: being highly mobile and dexterous. Those physical skills have been hardwired into the human brain, the result of evolution and the way we practise and practise and practise. And that is an idea that we are applying to the next generation of robots,” [said Dr Matteo Leonetti, from the university’s School of Computing.]

Asian Robotics Review has released a free 63-page report on automation in Southeast Asia.  With country-by-country analysis and insights from leading experts on robotics in the region, this is a must-read for anyone interested in one of the world's fastest growing automation markets.

Car giant NISSAN is exploring the benefits of human-robot collaboration for door assembly tasks.  It's all part of the European Union-funded Sharework Project, which is tasked with a developing "a Europe-wide smart modular solution" for collaborative production.  New video about the project was released on Tuesday...

On Wednesday, Amazon announced plans to invest more than USD40 million to develop a new state-of-the-art robotics site in Westborough, MA, U.S.A. The new 32,516.05 square metre (350,000 square feet) facility will operate in addition to Amazon Robotics’ current site in North Reading, MA, and together they will form the company’s "epicenter of robotics innovation."   (H/T SupplyChainDive)

“Picture it like playing a sport: if you’re playing tennis with someone who always lets you win, you won’t get better. Same with robots. If we want them to learn a manipulation task, such as grasping, so they can help people, we need to challenge them.”

But before you dash off to give your robot a performance enhancing kick, consider this article from The Conversation, published Wednesday.  (It's by the authors of a recent paper entitled 'Could Social Robots Make Us Kinder or Crueller to Humans and Animals?' which suggests that "there is some reason for thinking that social robots may causally affect virtue, especially in terms of the moral development of children and responses to nonhuman animals [with] implications for future robot design and interaction.")

Meanwhile, the U.S. Army announced that it has selected General Dynamics Land Systems to produce up to 624 robotic mules under its 'Small Multipurpose Equipment Transports' (SMET) program.  The contract is worth USD162.4 million. 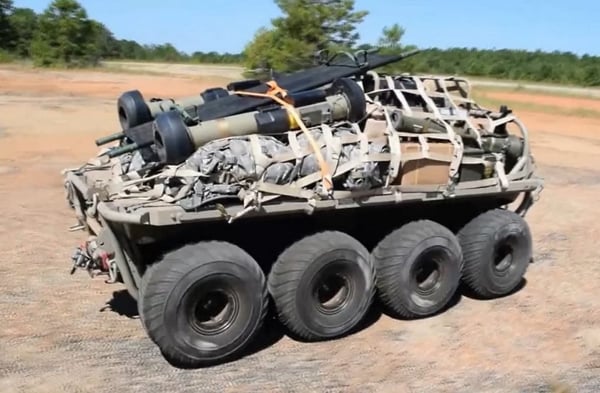 The robotic mule is designed to reduce soldiers’ load by carrying their weapons and supplies in the field. According to Army’s officials, new SMET’s basic operational capabilities will include unmanned and optionally manned system, also the new system will carry 1,000 lbs., reducing soldier weight burden by 100-plus pounds each when in support of a rifle squad.

1.  Researchers at SEAS and the Wyss Institute for Biologically Inspired Engineering have developed the world's first microrobot powered by soft actuators to achieve controlled flight.  Dubbed 'RoboBee,' the bot is powered by soft artificial muscles that can crash into floors, walls and other RoboBees without being damaged.

2.  Thinking of incorporating AI into your business? The Open Roboethics Institute is launching 'Foresight into AI Ethics,' a guide for AI roadmaps that "offers a systematic way for you to identify the main stakeholders involved in the technology, consider potential ethical challenges, and ultimately design intelligent systems that are not only meant to do good, but are designed and implemented to have the best interest of users and society in mind."  (Sign up for a copy of the Toolkit here.)

3.  One of the many attractions at IROS 2019 this week was a Harvard-built, bio-inspired bot that “incorporates anatomical features unique to sea urchins.”  The 'UrchinBot' can be actuated by pneumatics or hydraulics and operates without a tether. (H/T IEEE Spectrum)

5.  MIT engineers have developed a plant-inspired robot that's flexible enough to twist and turn yet rigid enough to support heavy loads or apply torque.  When its task is complete, the bot retracts the appendage and can extend it again --at a different length and shape-- to suit the next task.  (H/T Alphagalileo)