Nissan Motor Corporation recently announced a series of investments to upgrade its production technologies and, as the company reaffirmed this week, cobots are a key element of the auto giant's human-friendly automation strategy.

Miyako Shiraishi, a production engineer at the Yokohama Plant, says there were several reasons for choosing cobots over conventional robots.  “They can share the workspace with workers, we can build systems without needing safety fences, and we can move them around easily to adapt to changes in our production needs,” Shiraishi explains.

Plastics component maker igus unveiled a new cobot cable management kit this week. Designed to manage cable clutter (and reduce associated safety issues), the kit uses ball-and-socket links that enable individual pieces of the system to be replaced if any get damaged. 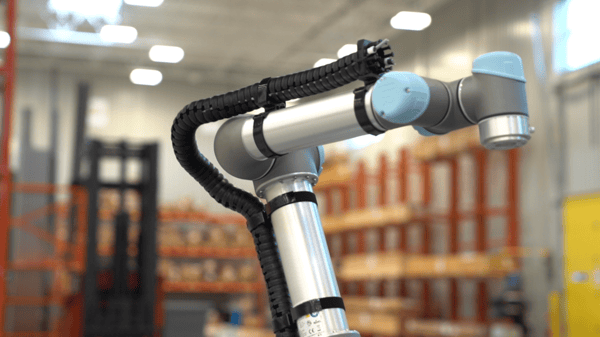 In 2019, North American robot unit orders rose 1.6% compared to 2018 to a total of 29,988 orders, according to figures released on Wednesday by the Robotics Industries Association (RIA). Order revenue for 2019 declined 1.3%, closing the year with a total value of USD1.681 billion. “While 2019 was a challenging year, and the outlook for growth in 2020 is murky, we’re still seeing growing interest in automation technologies and solutions that will lead to continued future growth,” said Jeff Burnstein, A3 & RIA President.

Meanwhile, one of Robotiq's adaptive 2-finger grippers was spotted helping to craft pizza this week in new video from Kickmaker and French robotics firm Pazzi... Art and tech, the Carters point out, have long had a complicated relationship: “Whether it's a camera obscura or an actual camera, some people have found those threatening,” said Rob. But here they see robotics as an extension of artistic craft, a tool, in the same way as a film camera.

Researchers at Rutgers have unveiled a prototype blood-drawing robot with built-in ultrasound technology that allows it to easily locate veins. The system also includes a module to handle samples and a centrifuge-based blood analyzer. 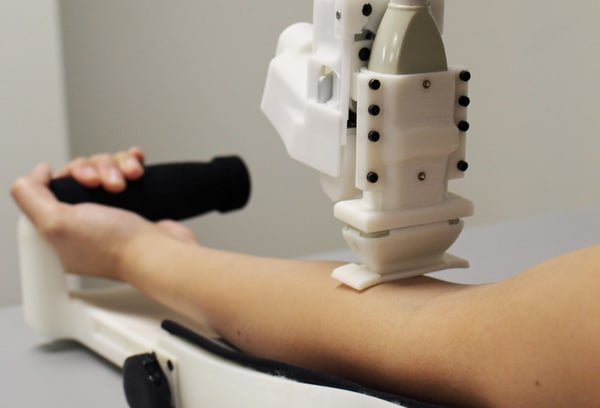 In some patients, the prototype system is significantly more
accurate than humans at locating veins. Credit: Rutgers

MIT researchers have developed kirigami-inspired soft sensors that enable soft robots to achieve awareness of the position and motion of its body.

A novel deep-learning model [...] sifts through the noise and captures clear signals to estimate the robot’s 3D configuration. The researchers validated their system on a soft robotic arm resembling an elephant trunk, that can predict its own position as it autonomously swings around and extends.  The sensors can be fabricated using off-the-shelf materials, meaning any lab can develop their own systems, says Ryan Truby, a postdoc in the MIT Computer Science and Artificial Laboratory (CSAIL).

1.  Remember 'Surena IV' -the Iranian humanoid robot that we reported on last December? Well, new video of the bot was released this week, along with a superb feature in IEEE Spectrum, which delves into the history of the impressive humanoid's development at the University of Tehran.

2.  Over recent decades the city of Pittsburgh has transformed itself from waning industrial hub to become one of the world's leading locations for robotics and AI research. Arirang News visited recently to explore Pittsburgh's new role as a global robotics center.

4.  Researchers at the University of Delaware are using social robot Zenbo to teach kids how to be safe online. The bot does this by "reading children familiar stories, such as Little Red Riding Hood, that have been creatively adapted for the digital age by the research team."

5.  Boston Dynamics' quadruped Spot bot was set the important task of transporting a human via rickshaw in a fun new video from Adam Savage, released Thursday.

By Romy A Letourneau - September 23, 2019
END_OF_DOCUMENT_TOKEN_TO_BE_REPLACED