Sales of Parallel Robots Surged in 2013

Currently, dozens of manufacturers produce parallel robots, mainly Delta robots. The list includes ABB with their FlexPicker, FANUC Robotics with their M-1iA mini Deltas, Kawasaki Robotics, Yaskawa/Motoman, Adept Technology, HIWIN, and many others. But where do most parallel robots come from?

Parallel Robots consists of three arms connected to universal joints at the base. The key design 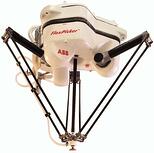 feature is the use of parallelograms in the arms, which maintain the orientation of the end effector. Delta robots have popular usage in picking and packaging in factories, because they can be quite fast, some executing up to 300 picks per minute.

In 2013, 41% of parallel robots were manufactured in Japan. Since ABB and Adept Technology are the only major non-Japanese robot suppliers, this probably means that there are plenty of opportunities for small parallel robot manufacturers such as Penta Robotics and Codian Robotics.

The term SCARA is an acronym that stands for Selective Compliant Assembly Robot Arm. The SCARA robot is based on a 4-axis design. It is ideal for high-speed assembly, kitting, packaging, and other material-handling applications. The main axes are X and Y, which makes this kind of robot really rigid in the Z direction. This kind of robot is ideal for pick and place on an assembly line since it is usually picking and carrying objects on the same level and dropping them on a given level. 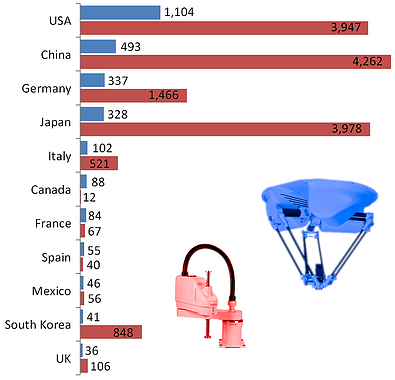 It is great to see the increase of robots on the world stage with the overall increase in robot sales of 12% to 178,132 units globally which is by far the highest level ever recorded for one year according to the statistics found in the World Robotics report. This can give us an idea of where the most likely markets reside for the upcoming sales of robots into the next year. But it is always important to remember that the past does not necessarily represent the future, though we can always hope that with the rise of collaborative (SCARA) robots this surge might easily become a tidal wave.