Mark Kahwati gave us the lowdown on the brand new Universal Robots e-Series earlier today. Yes, he said, you could stick a knife on a cobot! With the new safety features, it would even be safe.

Mark Kahwati from Universal Robots started his talk earlier by echoing the thoughts that were brought up in the discussion between Samuel Bouchard and Eden Ostergaard earlier:

"The pioneering work that UR did nearly 10 years ago really created an industry. And the outcome of that pioneering work yielded a robot that could be easy to program, quickly deployed, flexibly redeployed and was safe to work alongside humans. It's the intersection of these things that today defines a standard for collaborative robots."

The e-Series, he explained, was the response from UR to a recognition that they really had to raise that standard.

He explained that it is a "platform," not just a robot, and that it is really future proof. With it, UR are trying to establish a modern collaborative robot platform. He elaborated:

"The concept of platforms is not new. You've seen platforms, personal computing platforms, content platforms (like Netflix or YouTube), social media platforms. We're living in the age of platforms. What these platforms have in common is the underlying technology, the architecture, is constant. But they're built such that you can add technologies and applications on top of them. That's what we've done with the e-Series."

Technology Highlights of the e-Series

Mark ran through some of the changes they have introduced with the new robots.

He explained that these features seek to reduce the time and complexity associated with setting up and maintaining robot deployments. He also explained that all joints are easily replaceable in 2 to 6 minutes, and that updates can be made easily via software.

Mark said that the entrants to the technical challenge tomorrow will notice some of these improvements, for example by the increased responsiveness of the robots. There is also a significant reduction in the noise that the robot produces, which should make the challenge room quieter than it was last year! 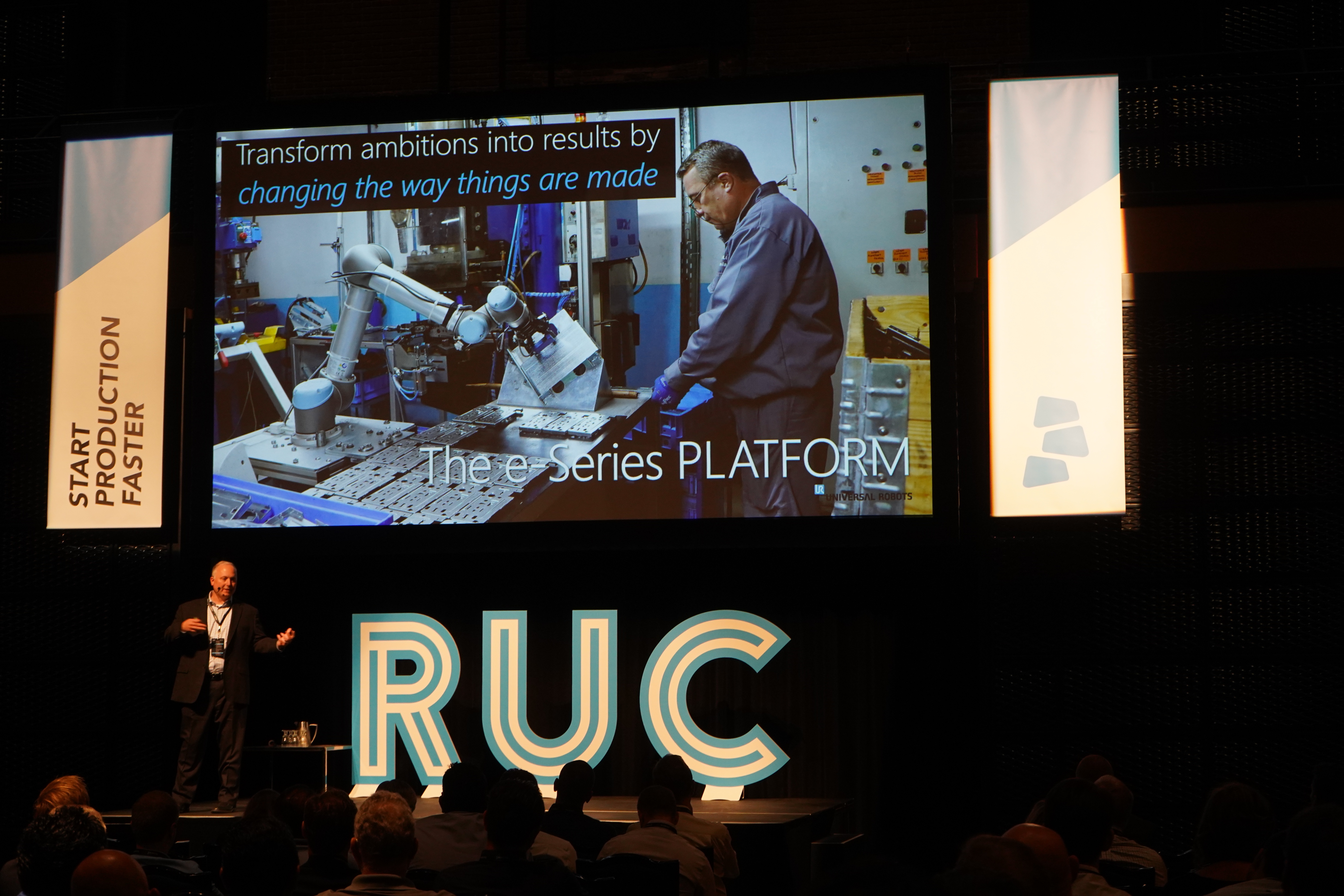 Safety features are now on the next level

Safety has been a common theme today, both in Jeff Burnstein's keynote and the discussion with Eden Ostergaard.

Mark explained that the safety features of the e-Series have been taken to the next level.

Tool sphere monitoring allows you to define a sphere around the tool (e.g. Jeff Burnsteins's knife from earlier) which acts as a safety plane. So you could safely use a robot to hold a knife! The elbow safety plane monitoring, which misbehaves sometimes in other URs, has been fixed in the e-Series.

Then, Mark explained that the e-Series has two new safety functions that no other cobot has, to his knowledge:

This, he explains, helps when you are making your risk assessments.

A constellation of features

Mark summed up the new e-Series by saying:

"There are a whole constellation of features that together make up e-Series. We think it's built for the future. UR can build on top of it as well as our partners in our ecosystem. We can't even imagine some of the capabilities that will come out of our ecosystem."

He believes that the e-Series will change the way that people make things in manufacturing environments.

He finished up by issuing us with a challenge:

"The question is: Are you guys ready to change the way that things are made?"