RUC Challenge Update: It's Been a Challenging Night!

After a night fueled by coffee, problem-solving and collaborative robots, here's how it went throughout this challenging night.

As the sun rises on central Quebec, the participants here at the Robotiq User Conference technical challenge have had… well, a challenging night.

As they're finding out, the task that our 10 teams face is quite hard. As we found out when we interviewed a few people earlier, they were also starting to realize that they were in for a long night! 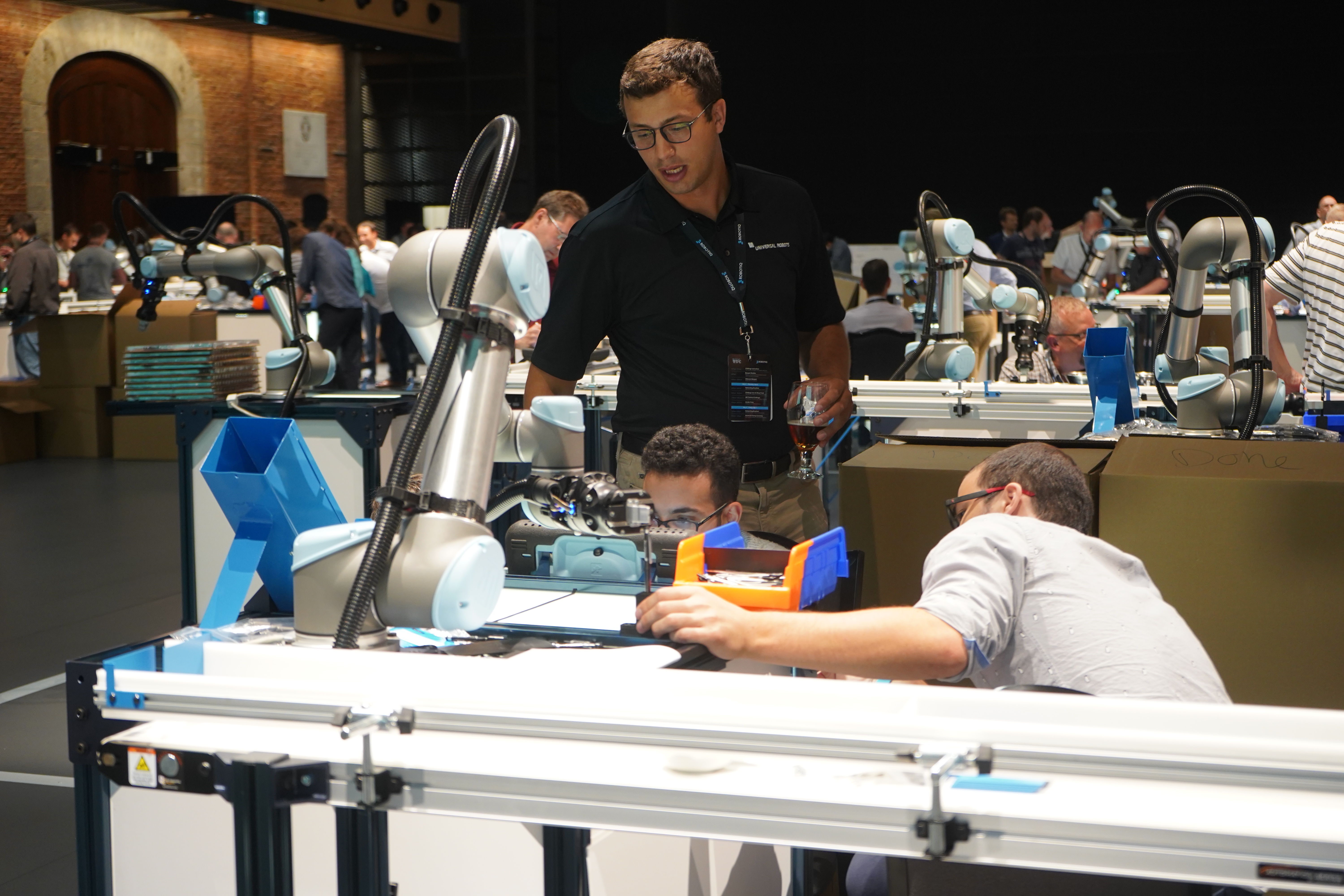 We chat to the first team to win a bonus point

At 8pm last night we talked to Xavier Quintero, Sales and Technical Support Manager from HTL Electronics, who work with Continental in Mexico. 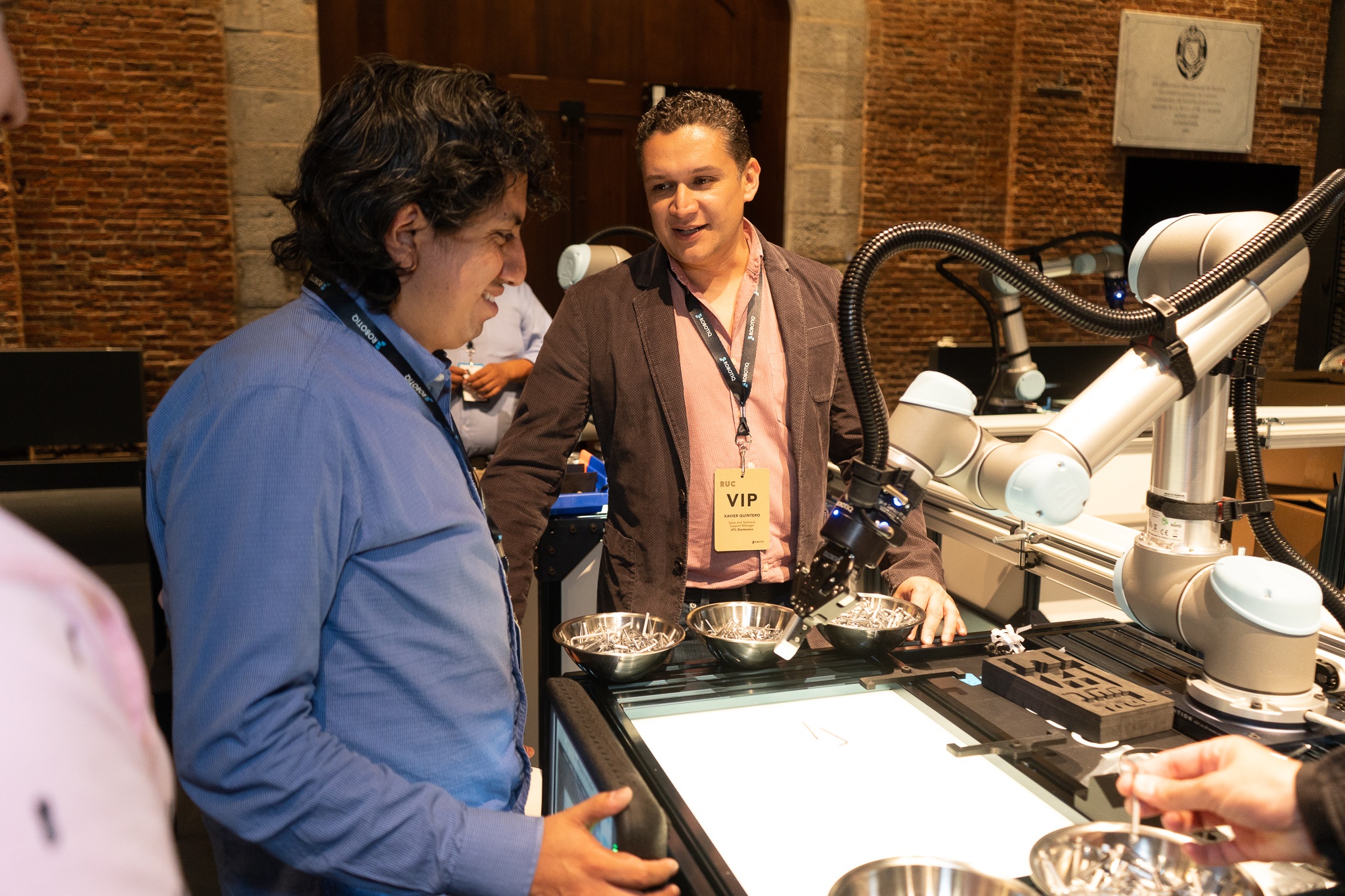 Xavier explained that HTL invited their clients from Continental to compete in the challenge. He told us: 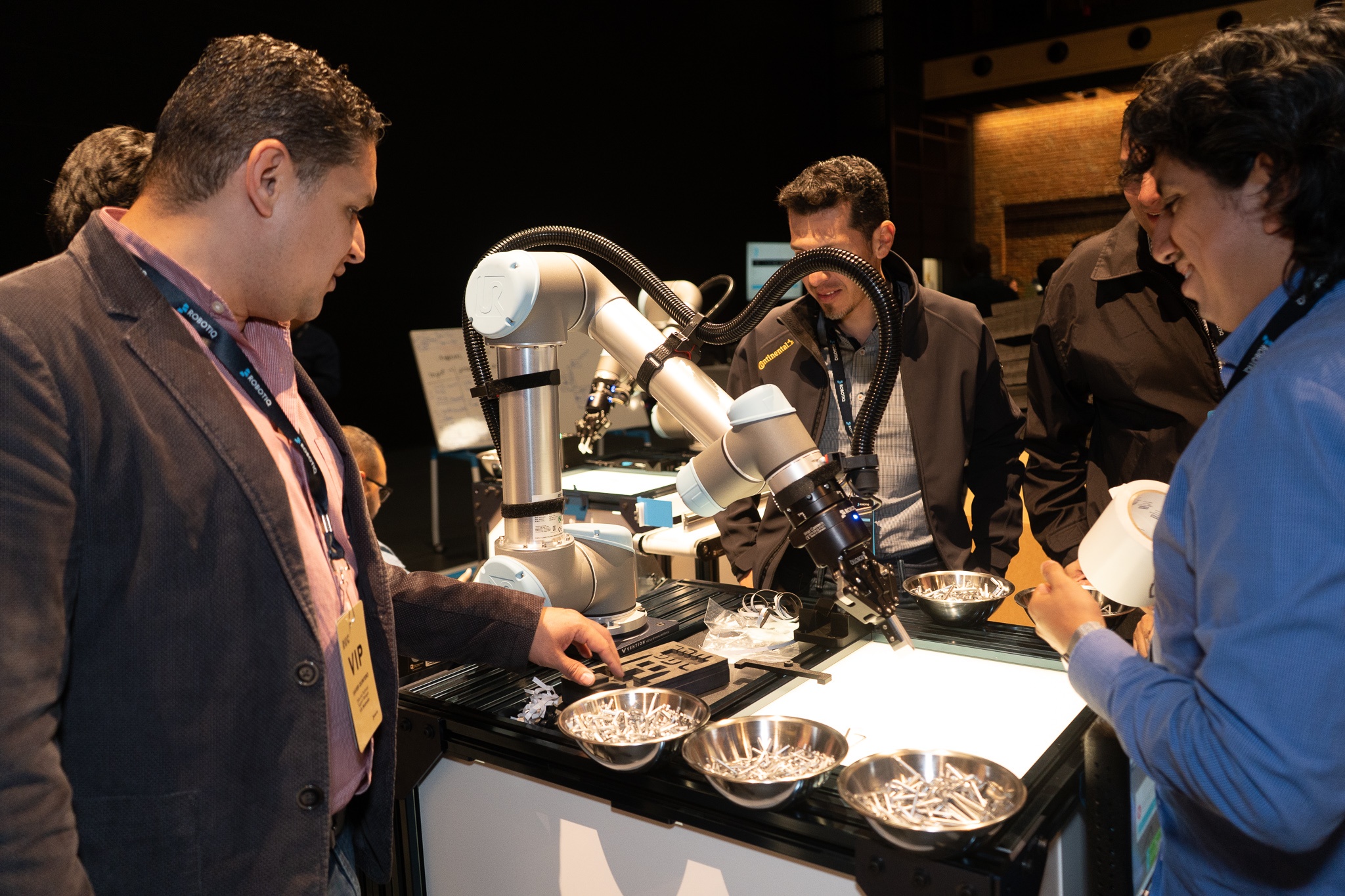 He explained that Lean Robotics is really working for HTL:

"We have a special relationship with Continental because we started to train the planners and process engineers.

We have a method which is based 100% in Lean Robotics. We make the planners a simulation and a capability analysis with a program called RoboDK. We help them to form a concrete idea and they ask their integrators or their tech center to develop the automation.

However, if the integration very easy and it's based in Lean Robotics they do it in-house. So this year we developed 14 robot cells with them. So we're faster than using integrators.

Lean robotics has been a great philosophy of implementation. One robot with outsourced integration is the cost of three robots when they do it in-house. So we work very well with this philosophy."

Are they confident they'll complete the task?

The task, Xavier felt, was quite a hard one. He told us:

But, he was confident that they would succeed in completing the task… at some point.

We hear how difficult the pen assembly is 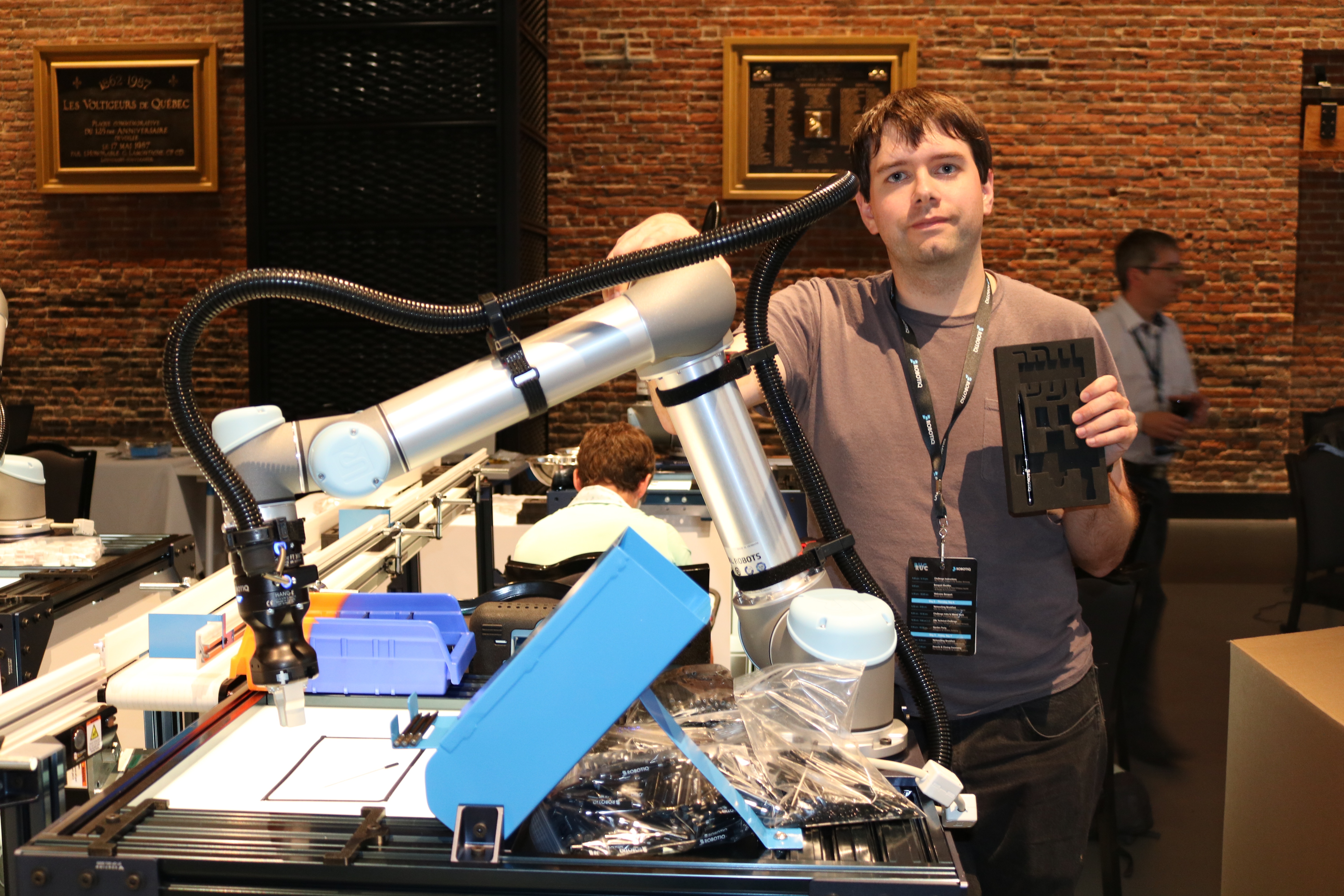 He explained what makes this sub-assembly so challenging:

"It was really difficult, mostly because the pens are very fragile. You don't think about a pen being fragile but when you just have the ink cartridge those things break so easily.

On top of that, I've used vision two times to gather two parts and the vision doesn't work well with parts laying on top of each other, which is another challenge because I have to pick them from a bin first.

Another problem I had was when I was putting the top cap on. The bottom assembly was a little wobbly and the top cap was very thin. If I was off just a little bit I'd bump into it. Not enough to cause any major damage, but enough to be scary. "

So how did you solve that?

When we spoke to him, James had been working with tunnel vision on the pen assembly to get it finished. 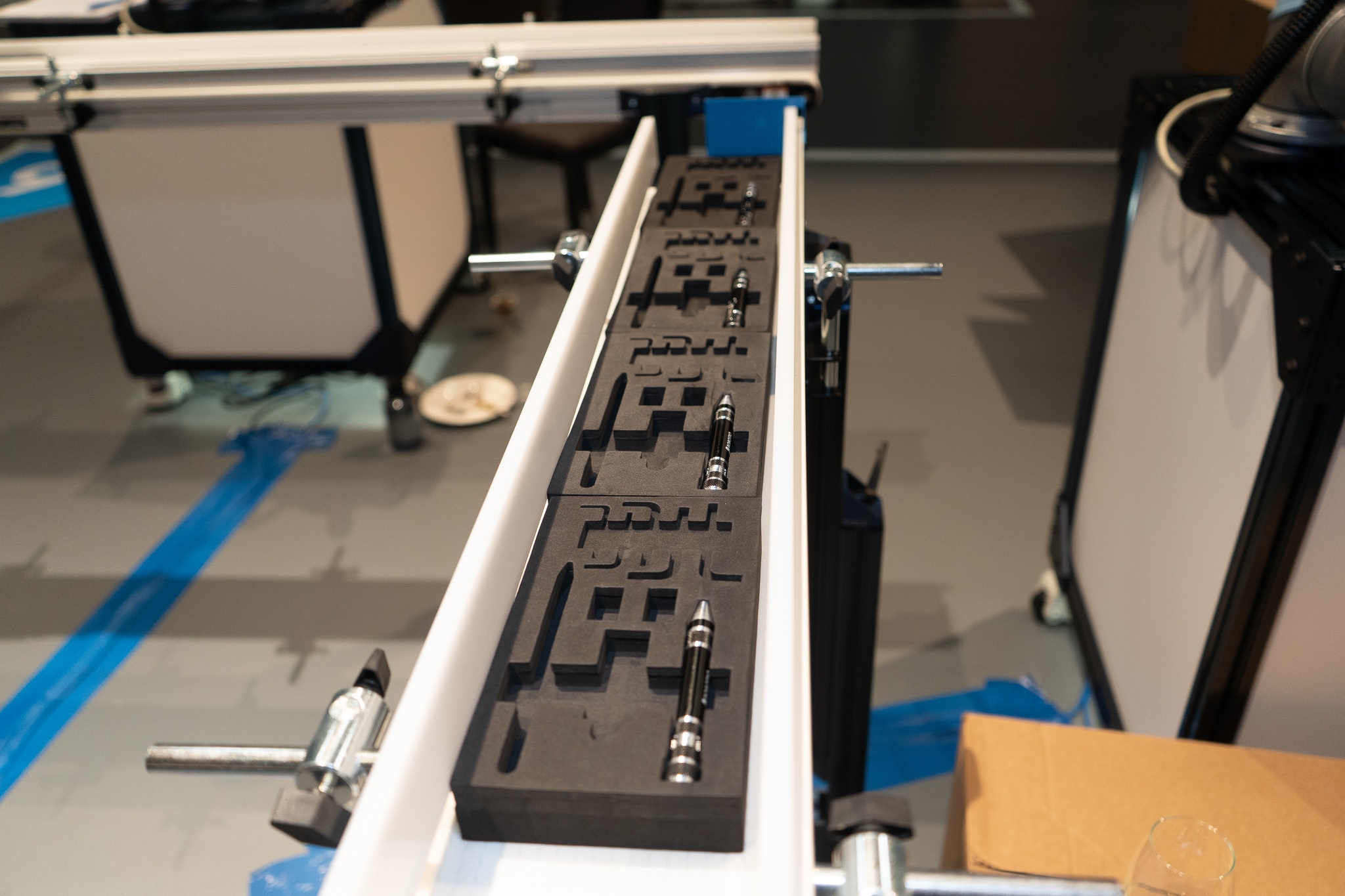 He had come up with some ingenious solutions to those challenges:

"One of the first things I did was I put in a lot of contingencies in how the parts were picked.

The robot would go down and it would pick either too many parts or none. With a depth of more than one, I would just drop it and go and try picking again. I just went back and forth picking between two locations. When I finally got an amount I wanted, which usually was three or less, I would then move it onto the location for the camera to view it and drop them down.

If there were one or two pens laying on each other there was still a problem. So, after I picked it, I would move it to the side of the enclosure where there was nothing, drop it down, let it settle, and then pick it right back up before I then inserted it into the final assembly."

James explained that the issue is never with the assembly of the pen itself. The challenge is part presentation:

"All my experience in robotics has shown me that the hardest thing is getting the part to the robot. That is the most difficult thing you can do. Once you have that, everything seems to go smoothly."

Now that James had completed his part of the task, we wanted to know what were his plans for the rest of the challenge.

He said that, after getting something to eat, he was going to focus on optimization and help out the rest of the team if they needed it:

"I think I'm going to tweak my sub-assembly a little bit more, get it more efficient. I've got some moves in there that are unnecessary. I've got a few things that could be a little bit better. But, overall I feel pretty good about that."

It's not just the attendees who are up all night. We also have our referees who are working to keep the contest as a fair as possible.

Robotiq's Nicolas Anctil is one of our referees this year.

Nicolas explained his job to us:

"When a team has a sub-task ready, I'm there to make sure everything is within the rules, to be fair to every team. I'm checking if they're doing the right bin picking, they're placing the parts right, and that the output is correct to the cell. The rule is they have to make the part three times without manual interaction.

Also, some teams come and ask for some tips, which we'll give them although we have a limit because we want to be fair with everyone."

Nicolas is not averse to making the task harder for the teams, if he feels that it's fair:

"If we see that a team has arranged the parts to be too perfect we go and mess with the input to make sure that they have it working really, really well. This needs to be really robust and be like it would be in the real factory."

Are the teams managing to complete the sub-assemblies?

Nicolas explained that he has been called quite a few times by each team, but that they haven't always been successful:

"Most of the times there's been a bug or a small defect to the process that has stopped the robot. But, each time they're really close. I think the teams are really good, and it's really fun to see the creativity that they've given.

The start of the competition was quite slow because everyone has to get to used to the processes and make their mistakes. It's normal because you have new parts and you don't know them well. But, right now after about 10 hours, it's really starting to pick up. Most teams have already called us quite a few times for parts. It's really interesting right now."

Are all the teams taking similar approaches?

Before the RUC, Nicolas and others of our Robotiq team did the challenge for themselves.

He explained that all 10 of the teams here have taken very different approaches to it:

"Every team did something really, really different. That's really interesting because when we did it with our team we had maybe three options that we thought were possible. We have 10 teams here and they all did things differently. It's all working for them and that's really exciting to see the creativity of our distributors. What they can do with their robots is very incredible."

How hard is the challenge?

Like Xavier and James, Nicholas recognizes that the teams have a challenging goal.

"The task is really, really difficult. I think some teams may be able to do it, but they'll have to have a long night."

It certainly has been a long night!

We'll be back later today with news on who has won the challenge.

But, for now, here is a video of Ryan Weaver's team (who we interviewed last night) finally achieving the allen key task: