Trump on robotics; will humans bully bots?; Panasonic invests in laundry bot; 'Sideways'-walking bipedal robot; Dairy bots; Roborace milestone and much more. Find out what's happening in our robotics universe this week. We hope that the news we have selected will interest and amuse you. Enjoy!

Once dismissed by critics as 'ridiculous, frivolous, and a waste of engineering talent,' the 'Laundroid' (which can fold a shirt in 10 minutes) is expected to be commercially released in 2017.

"There is still no price tag on the device, which is about the size of a wardrobe and uses artificial intelligence and image recognition technology to fold and stack clothes.

However, Seven Dreamers said that the robot has the potential to revolutionize home life.
It claimed on its website the device could create more time since the average person spends 9,000 hours, or 375 days, folding laundry in their lifetimes.

Panasonic told the BBC it was only funding 10% of the project, saying it was "providing the expertise" for an "all in one" device that can also wash and dry clothes, slated for 2019."

There is consumer demand for laundry-folding robots. A 2012 survey which asked people what they wanted from a domestic robot, found that laundry-folding, home security, a floor-cleaning, were the applications that end-users most wanted to see.

Roboticists at Dennis Hong’s Robotics and Mechanisms Laboratory (RoMeLa) in UCA, have developed a novel, bipedal robot design that is cheaper and less complex than the alternatives. At the heart of the new design is the robot's ability to direct its motion sideways as well as forwards.

Apparently, once Hong and his students (including Sepehr Ghassemi, Jeffrey Yu, and Joshua Hooks) came up with the concept for a sideways walking robot, designing, building, and testing the robot only took two weeks. NABiRoS stands for “Non-Anthropomorphic Bipedal Robotic System,” and its non-anthropomorphicness actually makes it better at navigating some otherwise tricky human environments.

Specifically, the researchers are hoping that adding a rotating knee will allow NABiRoS to easily climb stairs or climb through the kinds of doorways with high sills that you find on Navy ships (RoMeLa’s firefighting humanoid SAFFiR had a lot problems with this).

Rise of the Drones: From Policing the Streets to Painting Your House (The Guardian)

Fascinating  feature from The Guardian explores some of the obstacles facing the drone industry from technical and regulatory issues to some portions of public opinion.

“There are big technical challenges,” says Ryan Calo, a law professor at the University of Washington. “There’s a bunch of PhD theses that need to be completed before you can build a drone to autonomously police an area, find intruders, and use facial recognition to know who is meant to be there. Plus, having these things stay aloft beyond a few minutes is non-trivial.” The problems get larger still when you think of a drone having to avoid obstacles: weather, birds, manned aircraft and all the other drones zipping around. NASA is developing an automatic low altitude air traffic control system called UTM but is not due to complete its research until 2019. Any real-world deployment of such a network is still many years off.

The battery-powered, autonomous robot car (known as Devbot) made its debut on a street track at the Formula E Marrakech ePrix.

"What we are doing is at the forefront of technology right now," says Cooke, who is also CMO of Kinetik -- an investment company founded by Russian businessman Denis Sverdlov which is providing financial backing for the project.

"There are two or three kinds of space races, if you will -- some people are going to Mars, we're developing robotic cars and I think it's probably one of the most, if not the most exciting space in the world right now."

After the successful 30-minute test in Marrakech -- this year's host city for the United Nations climate change conference (COP22) -- Cooke say the company will next try racing two cars together on track with the eventual aim of having up to 10 cars competing at every Formula E ePrix weekend.

Robotics featured --briefly-- in President-Elect Donald Trump's recent interview with The New York Times; offering the first glimpse of the approach a Trump administration is likely to take towards robotics.

FRIEDMAN: Are you worried, though, that those companies will keep their factories here, but the jobs will be replaced by robots?

TRUMP: They will, and we’ll make the robots too.

I was honored yesterday, I got a call from Bill Gates, great call, we had a great conversation, I got a call from Tim Cook at Apple, and I said, ‘Tim, you know one of the things that will be a real achievement for me is when I get Apple to build a big plant in the United States, or many big plants in the United States, where instead of going to China, and going to Vietnam, and going to the places that you go to, you’re making your product right here.’ He said, ‘I understand that.’ I said: ‘I think we’ll create the incentives for you, and I think you’re going to do it. We’re going for a very large tax cut for corporations, which you’ll be happy about.’ But we’re going for big tax cuts, we have to get rid of regulations, regulations are making it impossible. Whether you’re liberal or conservative, I mean I could sit down and show you regulations that anybody would agree are ridiculous. It’s gotten to be a free-for-all. And companies can’t, they can’t even start up, they can’t expand, they’re choking.

Trump's response may be low on details, but it's encouraging for the US robotics industry to see that the President-Elect is aware of the importance of robotics in today's manufacturing.

From my own experience talking to people working on drones and autonomous vehicles, regulatory requirements have been a major impediment to widespread testing of these exciting technologies.

Serious robotics firms always place safety at the very top of their list of priorities.

Nevertheless, it will be interesting to see whether a Trump administration will nurture a low-regulation environment that is friendly towards robotics companies that want to test technologies in public spaces.

Brexit --the British referendum that resulted in a vote to leave the European Union-- is the other 'surprise' major election result of 2016 that could have a major impact on the robotics industry in the UK and beyond. One firm at least, is seeing advantages to the result, as Yahoo! Tech reported (via Reuters):

Japanese robot maker Yaskawa Electric sees short-term benefits from Britain's decision to leave the European Union thanks to lower labor costs for the roughly 150 staff it employs in Scotland, it said on Monday.

Yaskawa, one of the world's top makers of industrial robots, produces about half the drives and motion-control products it supplies to Europe at its site in Cumbernauld near Glasgow. Executives also said they would make no hasty decisions about the plant.

Automated milking systems are the Robotic Elders of agricultural bots, with several systems being commercially available for well over a decade. Until the arrival of cobots, the commonly accepted wisdom in manufacturing was that robotics are the preserve of large firms due to the prohibitive costs involved.

In fact, dairy milking systems have been bucking the conventional economic wisdom from the start, as the vast majority of dairy farms that use robots have less than 500 cows.

It is estimated 15,000 dairy farms across the world milk with robotics, with most herd sizes ranging from 50 to 250 cows. The most popular location for robotics thus far has been in Western Europe where labor costs are higher than many regions of the world.

Did you know that cobots are finding their way into the world of automated milking systems too? As Dairy Reporter reported this week,  Universal Robots and GNE Farm Equipment have been collaborating on cobot solutions aimed at dairy farmers.

Note that in this case, the cobot is working collaboratively with two main types of biologoical entity: humans and cows.

You could be forgiven for thinking that of the two, humans are more predictable around robots, but I'm not so sure...

Dietmar Exler, chief executive of Mercedes-Benz USA said this week that the real reason why it's taking so long to develop autonomous vehicles is "humans."

Some people are afraid of robots taking over. Exler is worried that humans will “bully” driverless cars.

Human drivers already speed, drive erratically and cut in line. Driverless cars will be programmed to be polite and follow the law.

When someone tries to cut in line at a traffic merge, humans won’t let them in. But a driverless car will be programmed to stop when it sees an obstruction — like a line cutter. “They’ll look for the autonomous car and that’s where they’ll cut in,” he said.

Theoretically, robot cars could be programmed to be more aggressive, but he doubts regulators would allow that to happen.
Still, Mercedes-Benz is moving full speed ahead on semi-autonomous and driverless cars.

Until next week, hope you enjoy these videos and links! 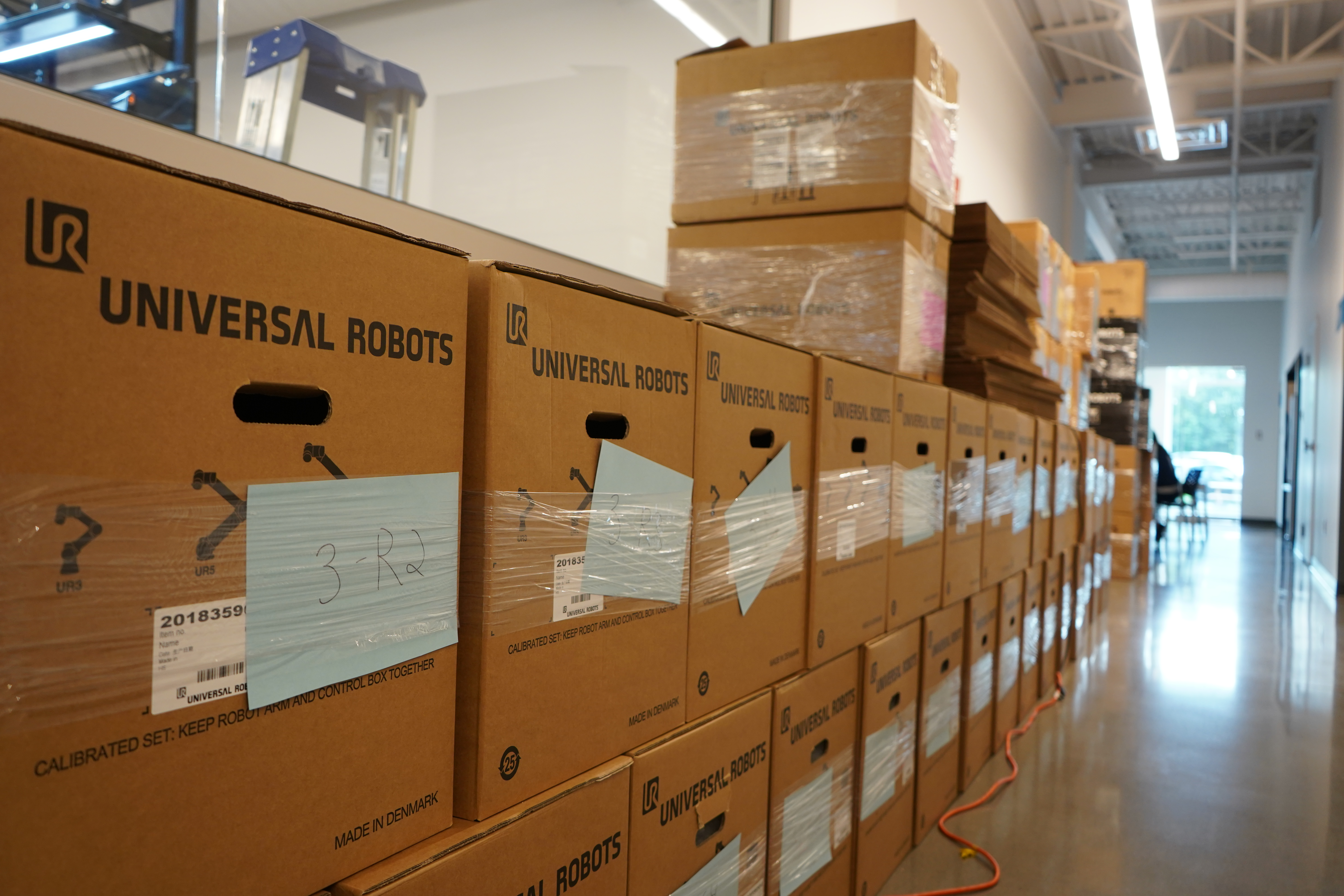 Signs suggest that robot adoption might be slowing down… but is it true? It's a bit more complicated than that. Here are the...