Until recently, programming force-sensitive tasks on any kind of robot was a job for experts. And then someone made it simpler. This is the story of Louis Bergeron, a behind-the-scenes little known automation professional who made force control for cobots easy. 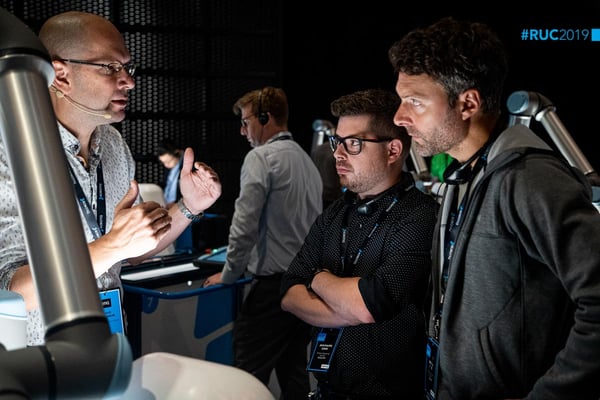 To understand how the built-in force-torque sensors of today’s Universal Robots can be used with such ease, we have to look back more than 20 years.

In 1994, a young Louis Bergeron completed his Bachelor’s degree in automation. The field was expanding, and many of the largest plants in Canada undertook projects involving robots.

After working for some time with a local automation integrator, Bergeron started his own business in the same field. He worked with all kinds of automation technologies before coming across his first industrial robot project in 2001. “It was a finishing project: automating the painting of wooden coffins,” he recalls. 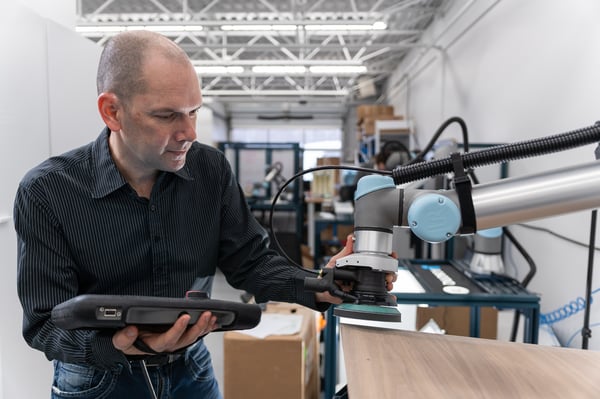 This first experience led to many more, and eventually, Bergeron was working on robots full-time. The wood industry, an enormous business in Quebec, had many requests in terms of machining, manutention, and sanding, especially with furniture.

By 2005, Bergeron found a way to save time and have one of his robots start production faster: “It was a finishing application and I packaged the whole software to make it easier to edit between each ‘trial and error’ round. I only had to change a few parameters and then try something new, instead of going deep into the program each time.”

The recipe proved a success, and Bergeron re-used and improved it whenever he could. He sold his shares in the company he started in 2013. The jack-of-all-trades, master-of-some then returned to full-time robot programming and worked at a few different places before landing at Robotiq in 2016.

“When I joined Robotiq,” he says, “the only feature that was easy to use on the FT 300 Force Torque Sensor was the path recording. The entire team worked hard to add much more to it. We created program templates called Skills, which gave anyone a basic program to start with if they wanted to perform insertion or find a surface, for example. It made up a very complete, user-friendly URCap.”

In 2018, Universal Robots launched the e-Series, a new generation of collaborative robots with a built-in force-torque sensor—which was made by none other than Robotiq! As Bergeron explains, “We packaged our FT 300 URCap into a piece of software called Force Copilot, so that every Universal Robots owner would get the same ease of use in terms of force control.”

Even though Robotiq experts had made force control much easier, Bergeron knows there’s still a lot left to improve. What’s next, then? Robotically inserting one part into another is hard, but there are other challenges, like finishing tasks, that present much more programming complexity. Bergeron aims to tackle these challenges head-on, and looks ahead to realizing many more programming breakthroughs at Robotiq.