How to create the right collaborative cell for your application?

ith all the different robot manufacturers, robot terminology and kinds of robots, it’s sometimes hard to figure out where to look for a specific application. Most people (including me) had the idea that if the job needs to be done in collaboration between a human and a robot, the robotic cell needed to be equipped with a collaborative robot. What we find out is that, there is a lot of applications that need to be performed in collaboration but cannot be done using a collaborative robot. We had a very interesting chat with Erik Nieves Technology Director at Yaskawa/Motoman and he explained to us the 80/20 rules of collaborative robot. These rules are a reflexion of the big 4 (Fanuc, ABB, Yaskawa/Motoman and Kuka) of the robotic industry and should be considered as an eye opener. Which means there is no good or bad way to create a robotic cell but there is a way to create the right collaborative robotic cell by respecting norms.

The actual definition of collaboration is: the action of working with someone to produce or create something. In the robotic industry, the definition is slightly different: The action of working alongside a robot to produce or create something. All the tasks that are done with the help of a robot are considered as collaborative. If the worker is using a gigantic robot to move an heavy object to a certain position to do further operation such as grinding, welding or fastening, the worker is then using the robot in a collaborative mode. So the robot is there to do the operations that need strength and endurance and the worker is there to do the tasks that requires skills and reflexion. 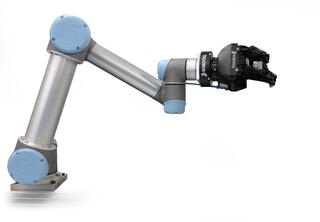 Small part manufacturing process is most of the time easy to automate. In fact, small part has small molds, easy manufacturing process and doesn't need any further operations. Although, big parts, are more complex, need more operations and are candidate to collaboration work between robot and human. The rule is: 20 lbs payload is not enough to cover 80% of the applications. In fact, as most of the collaborative robot have very low payload, and force limited axis it is sometimes hard to adapt a specific application to their specification. Since big and heavy parts has to receive additional work, it is hard to justify the use of a real collaborative robot.

Collaboration can still happen using a regular robot. By using a big robot that is not force limited, additional devices must be added to the robotic cell to provide a safe working environment. In fact, if the robot brings a part to the worker and then go into a ''wait mode'' or ''working mode'', where all the joints are active (brakes are off) but there is no way the robot can move. This could be a good way to do operations such as grinding in a huge part that comes out of a mold. As the robot keeps the parts still or move it slowly if the operator press a special key on the teach pendant. The operations can be done very safely by reducing the speed and helping the worker to move the parts with more ease.

As I told in the last section, collaborative robots have force or speed limited axis which means slower cycle time. The rule is: The robots spend 80% of their time working alone and 20% working alongside human. This means that most of the time the robot can work full speed and be 100% efficient. If you are using a collaborative robot with speed limitation, a longer cycle time is observed and can compromise your application. To resolve this problem, your robotic cell could be equipped by a security vision system. With this device, you can determine areas where the robot needs to slow down if there is a human near by and stop if the human worker is too close of the robot. This gives you the opportunity to run full speed most of the time and be completely safe for the human workers. Watch the following video to have a better idea of the applications and of the efficiency of the vision system in collaborative mode.

Using the stated solutions sometimes means the total elimination of physical barriers. Although, it’s not because the applicable norms don’t require to install physical barrier that you need to remove it. For example, even if a welding robot is equipped with force limitation and vision protective system, you still need to cover the robotic cell to restrict the fume on the working floor. Another example can be robotic cell hygiene, you want your robotic cell to be clean, put physical barriers to reduce the risk of contamination.

The most important point about this rule is to consider the system uptime. In fact, using collaborative robots sometimes means that workers can work beside the robot without any barriers, which also means that the collaborative robot can be bumped by a worker for whatever reason. The robot that just been bumped has move and is no longer aligned to do its given job. To realise this, the workers must first realise that there is something wrong with the production line, that it comes from the robot and that it is because the robot has been de-aligned. This whole process can take 20-30 minutes and during this time the robot is producing wrong parts. Even if the robot can be reprogrammed in 5 minutes, it took 35 minutes to replace the whole process and you just produce wrong parts, which is not good for your production. Instead of doing so, make sure to put minimal physical barrier or vision system around the collaborative robot to prevent this kind of events.

Physical barriers can also be software barriers, in fact the best example would be Kinetiq Teaching. The welder is in direct contact with the welding robot in a ''teaching mode''. The software has been developed to provide a safe environment to the co-worker to teach the robot where to weld. Once the teaching points has been shown to the robot, the worker can leave the robot zone then put the robot into the "play mode" and activate let the welding robot do its job.

So, as everything has been put in perspective, be bright and do what it takes to make your robotic cell safe, efficient and reliable. It’s not because the norm enables you to remove all physical barrier because you use a collaborative robot that it automatically means you need to remove them. Make your own mind and make sure you still respect the ISO 10218 norm on collaborative applications.

By Romy A Letourneau - September 23, 2019
END_OF_DOCUMENT_TOKEN_TO_BE_REPLACED