The following video shows two of our Adaptive Grippers controlled by a Matlab interface, which also monitors two Force/Torque sensors from ATI. The video doesn't tell much, as we can only see the Grippers moving and the readings of the sensors on the interface. However, I was really interested in what's under the hood. The system is based on a newly distributed communication architecture and library called Robot Raconteur. The integration was done by Matt Krolick and the library was developed by John Wason. Their work was supervised by John Wen, who is a professor at the Rensselaer Polytechnic Institute (RPI).

What is Robot Raconteur?

Robot Raconteur was designed to ease the integration of various components (such as sensors and actuators) into automated systems. Typically, most components come from various suppliers and they all communicate differently. Engineers often have to twist their softwares to accomodate all the subtleties of the devices used in their system. A communication architecture such as Robot Raconteur can instead be used to make all these devices talk together using the same language.

To manage communication, a protocol (for example TCP/IP) is usually required to send packets of raw data over a network. On top of that, a message passing mechanism can be used to standardize the way the packets are formatted and to define how the "nodes" (CPUs or devices) on the network communicate together (if the message is broadcasted or sent to one specific node, for example). Robot Raconteur is a message passing system that also contains a third layer called a Remote Procedure Call (RPC). A RPC allows the nodes on the network to share functions or even objects. This means that a node can directly call a function which will be executed on another node. This is quite an amazing feat considering the fact that two nodes are usually distinct devices that can be far away from each other.

How were the electric grippers integrated with Robot Raconteur?

The Adaptive Gripper, as good as it is (and it is very good!), does not "speak" the language of Robot Raconteur. Therefore, a gateway program was required to translate from Modbus TCP (the protocol used by the Grippers at RPI) to Robot Raconteur. According to the guys at RPI, the integration went smoothly, which is not surprising considering the fact that Modbus TCP is quite simple to learn and implement. 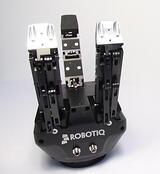 In an ideal world, all manufacturers would produce devices which communicate with a standard protocol through a high-level system such as Robot Raconteur. This would make all these components compatible, right out of the box. In turn, this would save an enormous amount of time and engineers would be able to focus on finding creative solutions to new problems instead of reinventing the wheel again and again. We're not there yet, but this challenge will have to be met in the near future to allows robotics (and automation) to grow to its full potential. Let's hope that Robot Raconteur will be successfull in its attempt to standardize communication among the automation world.