Automatica 2018 Day 2: A Weird Coincidence and a Dubious Claim

We launch a new edition of our book and our CEO explains a weird coincidence with the letter E. We also see ABB making a questionable claim about the size of their new cobot. There's a lot going on at Automatica 2018 on Day 2!

On with the show!

It's day two of Automatica 2018 and we've hit the ground running. Everyone is refreshed, rested and ready to see more of what the world of robotics has to offer.

We even had some time this morning to blog about the videos we recorded of our cool demos for you. But before we show you where you can see them, let's rewind to something which happened yesterday evening.

You can now start production faster… in German! 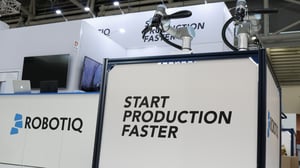 Back at the start of May, an unassuming brown package came through the Robotiq letterbox in Quebec. It was an exciting day for us! Why? Because that package contained the first ever print copy of the German edition of our Lean Robotics book.

And yesterday evening, we were finally able to release the edition to the German-speaking public here in Munich.

Robotiq's CEO Samuel Bouchard announced the new edition and explained how you can use the lean robotics framework to start production faster.

Sam also explained the weird coincidence that came with that final letter E when we named our new gripper Hand-E.

Armed with a selection of finger foods and Canadian beers, everyone was interested to see the Hand-E gripper in action at our Teaching Station. 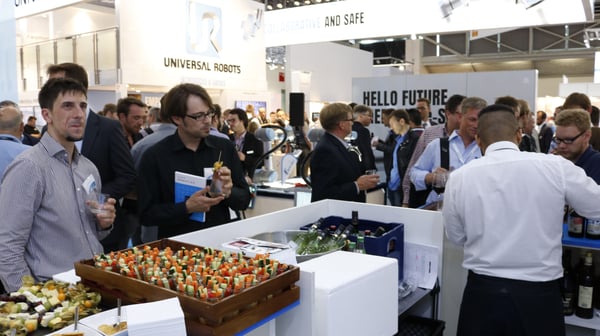 There are a lot of cobots this year at Automatica. In our live blog post yesterday evening, we showed you some examples of the newest trend for tiny robots. Today, we've seen even more tabletop robots, this time from Comau and ABB. They're not as tiny as yesterday's robot... but the brand new cobot from ABB seems to think that it is...

First, the eDo. The Comau eDo is an interesting robot (Hall B5 Booth 331). At a height of 855 mm, it's certainly not as small as the ones we saw yesterday — in fact, it's a pretty normal size for a cobot. They announced it a couple of years ago but this is the first time we've got a look at one up close. 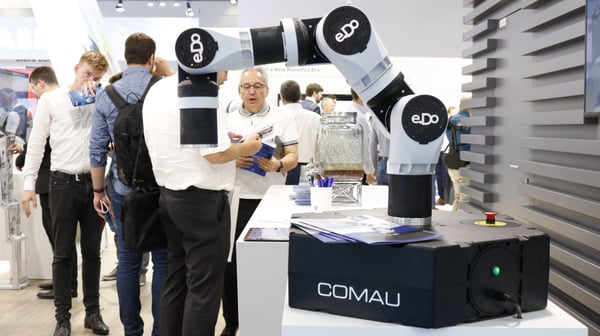 The interesting thing about it is that it's aimed at the educational market and runs on a Raspberry Pi and ROS. It comes in both a 4 DoF and a 6 DoF version. Comau says that they designed it "to allow students of all ages to create, learn and play with robotics." It's quite a lot bigger than most educational robots I've seen before, but I think it could be a good way to introducte industrial robotics to kids.

On our travels, we also saw a brand new collaborative robot from ABB (which should look slightly familiar). 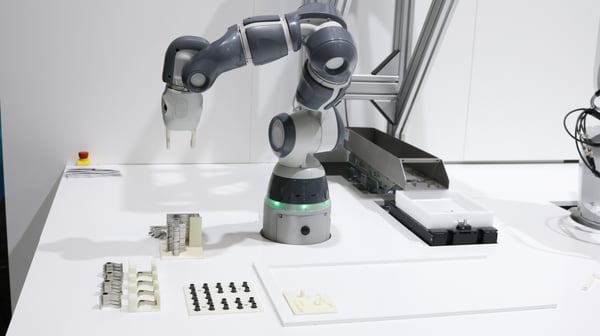 It's basically half a YuMi! ABB launched their brand new single-arm YuMi right here at Automatica 2018. They claim that it's "the smallest collaborative robot yet".

But, you know what?

Denso's Cobotta cobot that we saw yesterday is much smaller! — its total arm length is only 342.5 mm compared to YuMi's 835 mm. Perhaps ABB should have waited until after Automatica was over to make such a claim.

Could cobot manufacturers now be in a race to try to create "the smallest cobot ever"? Maybe.

In this photo, you can also see ABB's small IRB120 industrial robot with a dual-gripper setup.

We've also been showing off our own dual-gripper demo at our booth today. Sorry, the sound cut out when we were recording this one.

Watch our demos from the comfort of this blog!

Can't make it to Automatica yourself? No problem. You can take a virtual visit around our booth from the comfort of this blog.

Our integration coach Nicholas Francoeur is the star of the day. 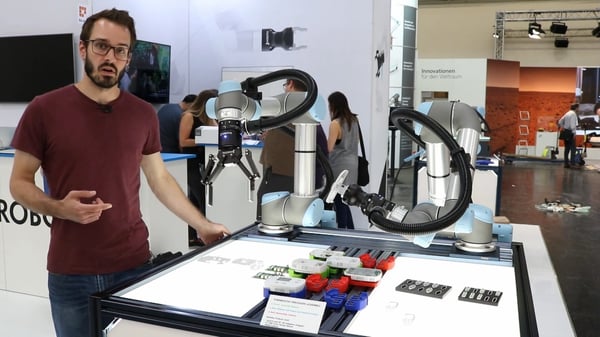 Today, we videoed Nicholas explaining three of our demos: the polishing demo — which shows off our new Force Node for the FT 300 Sensor; the pick and place demo with Hand-E; and the thermostat precision assembly demo — which almost uses all of our products in one single demo (well, almost all of them but not quite).

Check out the post we published earlier today to see videos of Nicholas explaining all of these demos. Also, if you're not here at Automatica and you're feeling left out of the action, you can actually interact with our robot demos from wherever you are! Just create a free account on Insights and you can look at the production metrics of our demos for yourself.

But, just to prove to you that it's not just Nicholas Francoeur who's doing all the work at our booth, here's a photo of another Nicolas (Lauzier this time, our R&D Director) explaining the polishing demo. 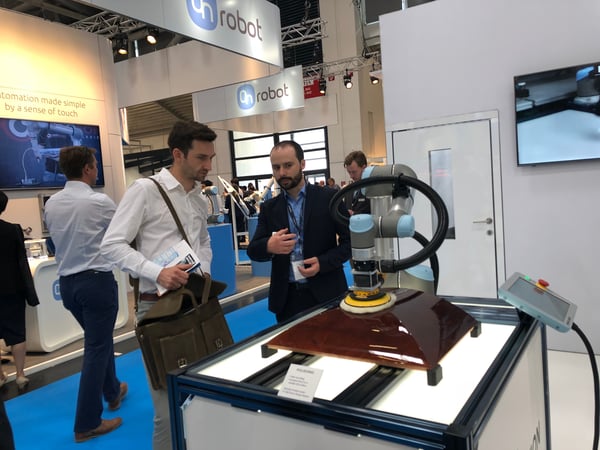 Right! It's time for us to join Nicholas and Nicolas and get back to work I think!