Willow Garage’s PR2 robot is the next in our collaborative robot series. This robot is slightly different than the others, because its first use is not intended for industries, but rather for the home. However, its functionalities allow it to be efficient in any environment. So, PR2 might be your next coworker. 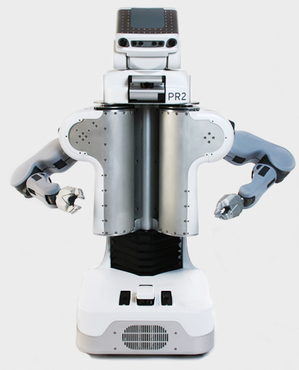 Willow Garage is a company that provides open source tools which allows people to work on a common platform and share results more effectively. These tools include an open source Robot Operating System (ROS) and their PR2 robot. Their Beta program consisted of giving 10 PR2s to universities and companies at no cost in order to enable coach sharing and help build on each others results. This project should develop robotics faster than having everyone working on their own.

Now, let’s take a look at their collaborative robot : PR2. All its systems are integrated inside its structure. It also has 2 compliant arms and a multi-directional mobile base. PR2 means Personal Robot 2, so the creators designed it to be a helpful assistant at home. Due to all its features, it can accomplish a variety of tasks.

Having compliant arms means that PR2’s arms can adapt easily to its environment. Each arm is very flexible and fluid. Its wrists have two continuous axis of freedom. Since it has two arms, a lot more tasks can be accomplished than with only one arm. For example, opening a spring loaded door needs the whole system to work together.

PR2 also has an omnidirectional base that was tested on 26.2 miles of autonomous navigation. This test was made possible with an open source code that can be found on the ROS website. Furthermore, all its upper body can move up to reach higher object due to its telescopic spine. 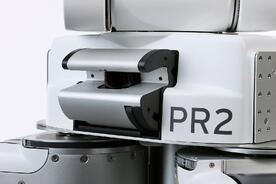 The Willow Garage robot can recognize objects with its lasers and cameras. In fact, PR2 has a tilting planar laser scanner situated in its “neck”. This device always works and gives information to the robot who is continually evaluating its environment. Using the 3D point cloud library, Willow Garage has kept using open source software to enable researchers to continue adding improvements.

For some applications, such as opening a fridge door, the robot needs to interact with its environment. It has to adjust the force applied in order, not to rip off the handle and yet have enough force to open it. So its gripper has fingertip sensitivity to detect the force necessary to apply to the object.

Talking about PR2’s robotic gripper, the Willow Garage team explained that even with really simple mechanical grippers their robot could do a lot of different tasks. Now, it would be interesting to integrate their robot with our electric end-effector to give it even more flexibility and functionality.  PR2’s arms are modular, in order to make this possible, so that other grippers, sensors or hole arms can be used.

About the company, recently major changes were made in their funding model, at first, it was a non-profit research company funded by the government. However, at the beginning of 2013, they announced that they would enter the world of commercial opportunities in order to become a self-sustaining company. They said they would continue to offer great support for their previous products, such as the PR2.

We hope that Willow Garage will keep on with their activities, because they are a great actor in the personal robotics fields.