To continue the collaborative robot series: this time we look at the Light Weight Robot 4+ (LWR 4+) from KUKA.

Kuka has targeted the needs of emerging clients by developing the solution of a flexible and sensitive robot : the LWR 4+. 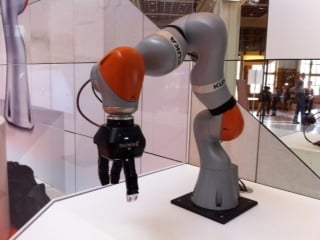 Their new product’s housing is entirely enclosed and made of aluminium. It contains all the necessary components; such as motors, wires and sensors. This arm has 7 degrees of freedom which gives the LWR 4+ greater flexibility and precision than the more common 6-axis robots. It also has a payload capacity of 7 kg.

Kuka Robotics has the same objective as other collaborative robotic companies, they want to make robots accessible for any shop floor. To achieve this goal, they offer a low cost product with a lot of flexibility. Since small companies often deal with small batches and many different products, this flexibility allows the robot to be assign to a different task and place in a short amount of time.

As mentioned above, the multiple sensors in the LWR 4+ make it safe for a human to work with, however, in case of a sensor failure, safety cannot be assured. Kuka wants to improve this aspect of its robot by detecting collisions and reacting to them with improved safety technology. Their PHRIENDS project has already given good results with a new safety strategy using virtual walls.

Kuka was at the ICRA in May 2013, where they were demonstrating their LWR 4+ robot using our 3-Finger Adaptive Robot Gripper. There are many reasons why our industrial electric grippers mesh well with the LWR 4+. For more information about the integration of the LWR 4+ using our hand, take a look at the article : The Right Gripper for the Kuka Lightweight Robot (LWR).

Also at ICRA, Kuka also has released the new LWR 4+ more oriented for industrial applications. Stay tuned to learn more about this new generation of the Lightweight robot.