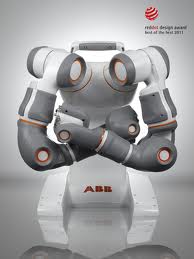 In industrial automation, flexibility and intuitiveness are becoming more and more the sinew of war. In fact due to the necessity to produce in efficient ways in order to be economically viable, industrial robotics has to do a mindset change: be flexible, accessible (re: moneywise) and easy to use (i.e. not spending more time to program a process than to produce a product).

This quest for flexibility and user-friendlyness has seen the arrival of a new generation of industrial robots: the collaborative robots. This articles is the first of a series of posts dedicated to the introduction of this new generation of robots. In this blog post we will introduce FRIDA from ABB.

FRIDA (which stands for Friendly Robot for Industrial Dual-Arm) is a dual-arm robot with 14 axis of freedom (7 in each arm). The size of this industrial robot is similar to a small adult. This concept has been created in response to requests from ABB'S customers who desired a robotic solution for manufacturing environments where robots and humans have to work together.

Originally built for the consumer electronics industry and other small assembly applications, this collaborative robot has been designed to be as compact as possible. In fact it takes the same working space as a human. Compact, this robot is portable and can easily be carried around the production floor, as well as mounted onto different work stations. Its controller is integrated into its torso making its installation and change of location even easier.

The size and the look of this robot really clash with the usual ABB robots. Instead of being massive and orange (meaning: hey I'm big and tough, so don't come too close), FRIDA is small, compact, lightweight and its colors are different shades of grey.

Here are the key features of this collaborative robot:

Considering that this robot was designed for electronics assembly, we can assume good precision and repeatability.

FRIDA is still not a commercial product even if it has been "released" in 2011. So there are still some questions that remain unanswered, especially about programming. Will FRIDA be as easy to teach as a robot from Universal Robots or the Baxter of Rethink Robotics? Will we need in-deep knowledge in programming to use FRIDA? We still don't know.

There is also the question about its price. It has been promoted as an affordable robot, but will it still be affordable compare to Baxter or a robot from Universal?

I guess we can only wait and see!

By Romy A Letourneau - September 23, 2019
END_OF_DOCUMENT_TOKEN_TO_BE_REPLACED