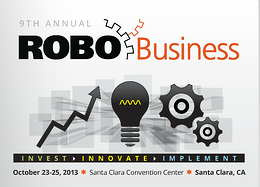 I am just back from an exciting week in one of the global robotics hotspots: Silicon Valley. I was there to attend and speak at the Robobusiness Conference. My talk is now online if you want to read it ‘Robots for Agile Manufacturing’. The exhibition was twice as big as last year and there was great enthusiasm by the industry. We are back to that geeky gold rush atmosphere that I felt in 2007 at the Robodevelopment Conference… just before the 2008-2009 slump that slowed everybody down. Below are some takeaways that I thought you might find interesting.

1. The Ever Increasing Presence of Telepresence

In the exhibit area, Suitable Technologies’ Beams were rolling around, driven by virtual visitors. This looked like a mix between an EH Publishing live event and the online event they had done a few years ago. I like the idea, as it can expand who can attend and it turns out that some people were willing to pay to visit the exhibition area in Beam. This was an interesting proof of concept. As Suitable is looking to explore new ways of reinventing tradeshows, they also tried to keep one of the most ‘classic’ approaches to male-attended tradeshows: the booth bimbos. It created a few awkward moments when the Beambos, pretty girls that were hired to drive around and discuss with the crowd… realised that they had very little common interest with most of the attendees. 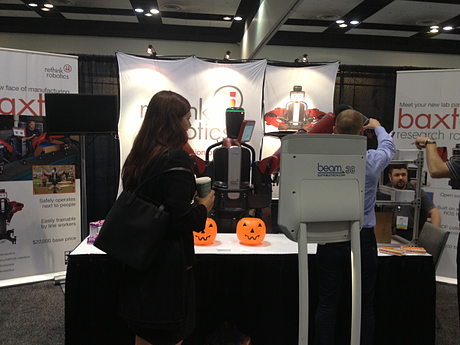 iRobot also launched their telepresence robot which targets corporations, the AVA 500. The robot is based on their RP-VITA medical platform. It can drive autonomously for you, so when you teleport, you are already where you need to be. iRobot’s CTO gave us a demo where we logged into their office and went to chat with Colin Angle around a whiteboard. They are partnering with Cisco to make sure their robot uses the needed Internet connection.

2. Life is a Highway, in a Google Self Driving Car

The best keynote was by Chris Urmson, during which he explained where he was coming from, why they’re working on autonomous cars at Google and how they are doing it. It was interesting to see the impact of the DARPA Grand Challenges in which Urmson participated while at CMU. DARPA is working on technologies that should be here in 5-10 years. It is interesting that the industry picked up the ball and ran with it, having all automotive companies hiring graduates from the different participating teams. He showed us numbers proving how much smoother and safer their autonomous cars are compared to human drivers. As to the question “How will Google monetize on the project?” the answer was obviously “We’re figuring it out.” 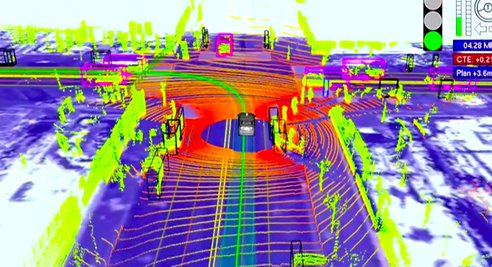 3. Willow Garage: the End of an Era… and the Beginning of a New One

Discussing the start and end of Willow with different people, I realized how this story is interesting. I think that in a few years we’ll look back at this era and see it as a pivotal moment for the robotics industry. Willow really seems to be converting a bad end into a good beginning, especially with the talent and know-how now being disseminated in different startups, large companies and research organizations active in robotics such as SRI, IPI, Google, Unbounded Robotics, the Open Source Robotics Foundation and Suitable to name a few.

Never in any conference that I’ve attended have so many people not been able to talk about what they are doing right now. All of this is pretty intriguing and we should expect big announcements in our industry in the near future. Roboticists are a bunch a very friendly and competitive folks.

Did you know that there is a 50% yield in crop farming? That’s one thing that I learned from Brandon Basso in his keynote. They have a pretty interesting model at 3D Robotics combining open source, hardware and data collection services for farmers, to help them make better decisions, faster.

6. Robotics at its Simplest Expression is the Internet of Things

Another inspiring keynote was from Yoky Matsuoka, a former robotics professor who is turning her know how into intelligent consumer products combining sensors, self-learning, human interface, optimization… and design. Their company is Nest, who’s been making beautifully smart thermostats and who are now introducing a product that aims at reinventing the oh-so-annoying fire and carbone monoxide detector.

This talk also reminded me of how visionary the article “New Rules for the New Economy” was back in 1999, in which they explained that pervasive computing would enable any device to talk to any other and create new opportunities.

Professor Henrik Christenson presented the updated roadmap to US robotics. Robots can create jobs and generate money, that’s what he argued to congress to get them funding robotics. To prove his point, he shared very interesting news for manufacturing robots, reshoring is real. The latest Google phone is being made in the US after years of movement to China. Other companies in this field who are increasing their US manufacturing are Apple, Lenovo and Flextronics.

Another interesting note from Prof. Christenson: on average, the US male will have played the equivalent of 5 years of work in video games. How can we leverage this skill set in robotics?

It is now becoming the tradition to unveil new commercial robots at Robobusiness. This years new machine is the UBR-1, an improved, simplified version of the PR2. A very impressive work from 4 former Willow employees.

9. It Takes Time to Build

A robotics business takes time to build. Universal Robots - manufacturing collaborative robots - is a very successful and rapidly growing company from an industry stand point. But in his presentation, one of their co-founders Esben Østergaard put it into context by reminding us that UR is just 1 year younger than Facebook… If you keep working intelligently, you end up with solid companies like Aethon who, once again, proved their great know-how at the business of robotics with a case study in a hospital in the Bay Area. Yes, it takes time, but it’s worth it. Remember that even the Great Wall of China had its first brick placed at some point!

Even iRobot’s CTO Dr. Paolo Pirjanian admits it. Definitely, manipulation is not the first thing people implement on their service robots. On the side of industrial robots, ROS Industrial is gaining momentum to solve complex manipulation problems, especially with large end users getting on board. Many great challenges ahead and a lot of fun for those like us who aim at cracking this nut.

11. I’ve Heard it Before… but this Time it is for Real

A panel of investors were saying the same thing we had heard 6 years ago: technological enablers are here, big problems are ready to be solved, the time has now come for robotics. Read the articles I had written back in 2007 after a similar event (part 1, part 2)... many things were alreay being discussed. What’s different this time? Well first the 2008 crisis is somewhat behind us. And all the rest is coming to fruition: all the students that were trained in robotics, big companies entering the field, business know-how around robotics is being built, it is all coming together.

One of the greatest critics and believers of the robotics industry, Frank Tobe, is finally smiling. After years of tracking the industry, he had just announced his RoboStox investment index. It is doing pretty well so far (and it would have made more than 600% return over the past 5 years).

The advice we’ve heard the most? Find a problem, then find a solution (using your special robotic sauce). Make it at a low enough price for it to be appealing and you've got a business. Confirm that your product is worth something by having the customer put money on the table. If you're not sure how to do it, get Erin Rapacki's presentation.

13. See you Next Year on the East Coast

Robobusiness is in Boston on Oct. 15-17 next year. Write it in your agenda, it is an event worth visiting.