Both China and the United States have long ranked among the world's top manufacturing countries. Even though other countries like Canada and Mexico are also in the top 10 – and it's expected they will stay there through 2020 – the question is, who will be on top?

Manufacturing in 2020: a look into the future

We are already seeing the seeds of how the United States plans to take the top spot. According to Deloitte, the US is expected to surpass China by 2020, but how will it accomplish this?

It's expected that the U.S. will continue to invest in advanced manufacturing tech, which will in turn provide additional efficiency and a competitive edge.

Another trend is the general rise in compensation for workers in these fields. According to studies, the average worker compensation in these industries has increased by five times since 1975.

These new innovations, combined with a constant push towards new ideas and innovation, are expected to be the key factors in how the U.S. will rise to the top. For the moment, however, China is leading the way. 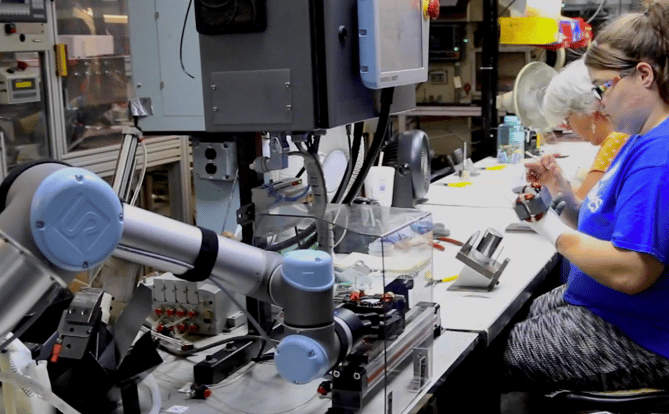 A collaborative robot on the production line at Scott Fetzer Electrical Group.

Why China is currently the world leader in manufacturing

As of 2016, China has been leading the world in manufacturing. Although the country was facing both economic and industrial challenges, it has since made major strides toward manufacturing to turn things around.

The country has invested heavily in robotics technology and advanced optimization over the years. It's paying off. China produces over 500 industrial products, and 220 of them rank number one in the world.

China has also built the world's largest 4G network, with a massive rise in users over the years. The country has been pushing forward with 5G technology, in the hopes of staying at the forefront of manufacturing.

While studies do indeed place the United States at the top of the world's manufacturing lists for 2020, China will be a competitor well into the future. Both countries are seeing the benefits of advanced technology and robotics, which will be key to their success.

Beyond 2020, it's hard to say who will take the top spot, but other countries are expected to join the fold. Could a new contender rise to the top? Only time will tell, but one thing is certain: robotics and technology will be the innovations that fuel the future of manufacturing.