Basically it's just terminology. Many people use the terms interchangeably, thus the confusion between Force Limited Robots, Collaborative Robots and Cobots. Actually they all have the same general purpose, but can be interpreted differently. Make sure to read this article so that you can distinguish the finer features, and so that you'll know what you are talking about at your next meeting ;-)

All this terminology means the exact same thing, a robotic device that is made to work in collaboration with humans. The principle is to re-create a co-worker. One that will help the human worker to execute tasks that are too hard on his body, such has lifting heavy weights or doing repetitive tasks. A virtual infinity of applications can be done by robotic co-workers.

There is a huge difference between force limited robots and collaborative robots. In fact, a force limited robot is a robot that is specially designed to work alongside humans. They have built-in force torque sensors that detect impact and abnormal forces. The sensors stop the robot when overloaded. This means that if the robot's arm hits something like...the worker, it automatically stops to protect its co-workers. These features aren't present on industrial robots and this is the reason why force limited robots can work alongside human without any fencing. Regular industrial robots need to be isolated because they don't feel or monitor their environment. 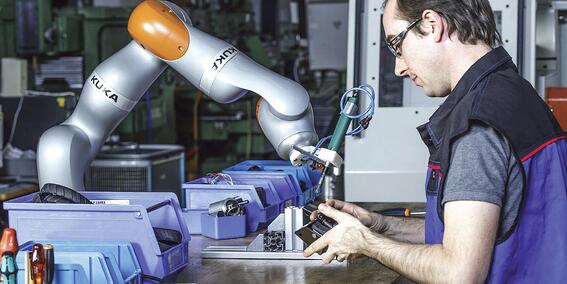 Force limited robots also tend to have rounder shapes than regular industrial robots. This means that they are less harmful when an impact occurs. A round shape, spreads the force over a bigger surface and reduces the pressure applied on the body part. Most of the force limited robots also have cushioned shells that absorb shocks and reduce the effect of deceleration on the body, which results in a less harmful impact.

An example of a collaborative robot can be observed in the next video.

These kinds of cells are monitored by lasers, vision systems or other sensors to allow humans to work with them by using reduced or absent fencing systems. Some types of collaboration can also be done at a distance, for example some robots can move around a plant and be monitored by an operator who is located somewhere else. Even if the operator is not right next to the robot, it is still considered a collaborative application.

Examples of Collaborative Robots (that are not force limited): 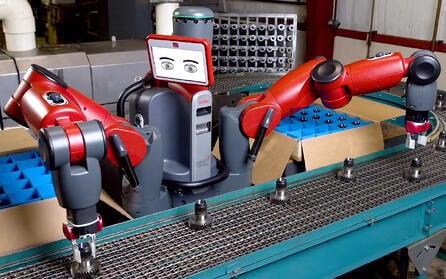 A Cobots is a slang term to describe a collaborative robot. Once again the term Cobot most of the time is used when talking about force limited robots.

By Romy A Letourneau - September 23, 2019
END_OF_DOCUMENT_TOKEN_TO_BE_REPLACED