What Are the Different Types of Collaborative Robots?

But, what are they really? Are they truly safer, or is that just a marketing ploy? Find out in this article. 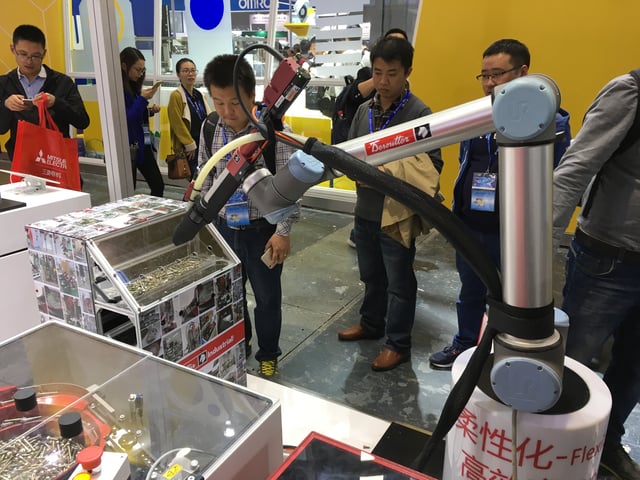 Every robotics show brings a lot of new cobots and new applications!

The first thing you need to know is that there are four types of collaborative robots as defined by the ISO/TS 15066 standard.

However, the only one anybody really cares about is Power and Force Limiting. We tend to forget about the other three types, which are Safety Monitored Stop, Hand-Guiding, and Speed & Separation Monitoring.

The main difference between Power and Force Limiting and the other three is basically that the former can use regular industrial robots with additional sensors, and still be totally safe for human-robot collaboration.

The Power and Force Limiting category represents robots that can sense forces and stop in order to avoid injuries. They have all kinds of sensors embedded in them.

(Now, most cobot companies will claim that their robots are ‘‘inherently safe,’’ but let’s be honest: the impact force is controlled by software… which doesn’t make them ‘‘inherently’’ safe. They are actually monitoring the signals of their sensor at a very fast rate and can detect small forces, which, if everything goes right, will result in a complete stop of the robot… but if there is a software failure, nothing prevents injuries from happening.)

But anyway, my point here is that almost all robots have sensors to monitor the external world, and they need these sensors to be safe.

The most common type of force limited robot is the Joint Sensing type, which includes robots like the Universal Robot (UR3, UR5 and UR10) and KUKA (IIWA). This type of cobot uses its joints to monitor forces applied to the robot's body.

Some robots accomplish this using the current of their motor, and some use force-torque sensors embedded in their joints. This type of sensing is easy for the end-user (you) because you only have to set a few things in the controller, and you're ready to run your safe robot.

The force limited robot has a different way to feel the forces applied to its body. In fact, as the name suggests, a large force-torque sensor at the base of the robot is used to monitor the different forces.

So if, for instance, the robot is programmed to go in a given direction, but then it encounters an obstacle in its path, the force sensor will sense an abnormal force vector and will stop. This technique is used by companies that transform their industrial robots into collaborative robots, such as the well-known Fanuc (CR-35iA) and Comau (AURA).

The goal of fitting an industrial robot on a sensor and under a soft skin is to allow to the manufacturer to re-use well-established robots and introduce cobots to companies that are already using their robot. If you're already using 95 Fanuc robots in your automotive plant, you'd probably prefer to continue using the same programming method and the same hardware, rather than learn a new cobot programming software.

The other advantage of this technology is that you can have a large robot with a large payload and still very good sensitivity to force (impact). These robots can typically handle payloads of up to 35 kg, and will still react to small impacts.

However, you will need to set the payload correctly so that the robot can compute whether the force applied at the force sensor is higher than the set weight that the robot is supposed to handle. This means that Force Sensor Base robots are a bit more complicated to use than the Joint Sensing type – but they are also more precise and safer for the user.

This type of force limited robot is not as widespread in the industry, but it's probably the safest option out there. Robots like the BOSCH (APAS) use tactile sensing (of all kinds) to detect impact. The sensor monitors the conductivity of the robot's body, and instructs the robot to stop once it reaches a certain threshold.

I think this type of robot seems like a really complex solution for the manufacturer, but a really safe solution for the end-user. Impacts are kept to a minimum, and sometimes the robot can even stop before it hits something, which is pretty impressive.

Inherently safe robots may use any (or all) types of sensors. What distinguishes them is that they cannot hurt you – in any way.

As you may have noticed, a robot with a 35 kg payload could still hurt you if something goes wrong. Inherently safe robots, on the other hand, are simply too weak to do much damage.

Take the ABB (YUMI) with its 0.5 kg payload, for example. The upside of its low payload is that it's practically unable to hurt you. Although you still need to set the robot in order to prevent injuries, there are very few ways to injure yourself with this type of robot.

Throughout the text, I've pointed out robots that are great examples of what's being done in the industry. At the same time, though, there are a lot more cobots out there.

Keep in mind that all collaborative robots should be safety-rated and/or approved by a third party. Hopefully this will help guide you towards the right choice for your next robot!