Most Popular Uses for Force Torque Sensors in Industry

Robotiq is not only producing Adaptive Grippers. In fact we do have integrated a force torque sensor in our product line. This device is designed to fit between the robot wrist and the robot tool. It is basically to sense the different forces applied on the robot tools. The device has several applications in the research world but is also widely used in the industrial world. Here is a short list of the most common uses of FT sensors in the industrial market.

Axis New-England has created a short presentation of what a force torque sensor can do. Consider that if the robot is not sensing the object, it has to be programmed to stop at a given position, right? Now with force feedback, the robot can sense where the objects are, determine their position and go grasp them. Take a look.

You may want to read a blog post on the difference between tactile sensors and force torque sensors. 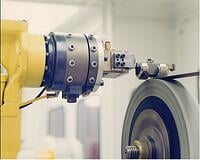 Robotic material finishing is a very broad field. Operations such as polishing, grinding, deburring and many others can be done with finishing robots. The concept is quite simple. Imagine yourself grinding a certain surface to make it flat and slick. You will adapt the force you are putting on the tool depending on the surface and the relief of the part. So you use the feedback from your sensor to adapt the force applied on the tool. A softer region, a smaller force, right?

Now that the process has been transposed to a robot, it needs to have the same feedback to be able to adapt to the shape of the part. Since complex shapes are polished by robots, a complex feedback process including a force torque sensor has to be set to give appropriate feedback to the robot. Once the tool applies a certain force on the object, the FT sensor feels it and by comparing it to a given threshold, the robot program can react accordingly. Take a look at the following video to have a better idea of this concept.

The assembly process uses the same feedback principle as the finishing process. The robot needs to have force feedback and decide if the object is being inserted the right way. In the following video from Artiminds Robotics, you can see that the robot can re-align the inserted part into the hole to make sure it fits right in the assembly. If you consider the same robot without a force torque sensor, the robot would try to insert the pin into the hole whether it was aligned or not.

In the quest to increase product quality, companies have come up with more evolved product testing techniques. In this particular case of robotic product testing, there are two main advantages to using this kind of cell. First, the flexibility that a robot offers allows for the removal of all the rigid components of the product testing line. This means that the robot that can adapt to various products. Second, using a force torque sensor allows you to have repeatable and recordable force data that can be monitored and therefore adjusted. By doing this, quality assurance can detect potential errors more easily and readily determine the necessary changes required to achieve the desired product results. Take a look at this robotic testing cell from elobau Sensor Technology.

Once again force and torque feedback comes into play allowing human workers to move robots where they want to using only their bare hands. The fact that the FT sensor feels the force applied on the tool ''unlocks'' the brakes in the robot's joints and gives fluid motions to the robot. In this particular case, the sensor is used with the Kinetiq Teaching technology to teach a robot where to weld. To make a long story short, the human worker teaches points and trajectories to the robot, by recording them, the robot can reproduce them at real speed. This process dramatically reduces the programming time necessary to program a welding task and enables a regular welder to teach the robot the welding task that s/he wants the robot to do.

Here are just four applications that can be done with an FT sensor. Many more can be done. Some applications might combine several applications to create a complete and more complex process. If you want to learn more about our FT sensor take a look at the link below. This link will give you the information you need to determine if the sensor might benefit your application.