Even if you are convinced of the benefits of adding force sensing to your robot, you might still have some good reasons for being uncertain.

Adding force sensing to your robot is an important choice. You want to make sure that you have considered all aspects of your task before making your final decision.

Here are 9 common doubts that people have when they are considering whether to use force sensing in their robot design:

1. Will it work with my application?

Probably the most common question people have with force sensing is whether or not their application is supported. After all, it doesn't make sense to invest in a force sensor if it will be useless for your particular task.

2. Will the robot have to move slowly?

The force sensors used in robotics can be sensitive to movements. You might wonder if the robot needs to move slowly for the force sensing to work properly.

Some users have certainly found that moving your robot slower produces a more accurate signal from force sensors. However, the robot doesn't need to move slowly for the force sensor to work and there are plenty of applications that don't require the highest accuracy.

3. Can I detect objects with force sensing?

When you are looking for a sensor to detect objects, your first thought is probably a vision sensor. As humans are primarily visual, we tend to think of the visual sense first. But, vision isn't the only option for object detection.

Force sensors can also be used to detect objects. In fact, for some applications, a force sensor is a better option for detecting the presence of an object than the other sensing options. For example, force sensing can detect the surface of an object even in bad lighting conditions where the object is slightly occluded.

4. Is force sensing complex to deploy?

In the past, adding force sensing to a robot required complex programming and knowledge of force control algorithms. This is no longer the case thanks to the arrival of easy-to-use force sensing technologies and more intuitive programming options.

With software like Robotiq Force Copilot you can quickly program a variety of force sensing tasks through a simple interface. Some robots, like the Universal Robots e-Series, come with force sensing included in the robot itself, which removes the need to integrate an external sensor.

5. Will I need to implement force control?

Force control is the name for a type of control algorithm that allows a robot to use the signal from a force sensor to affect its movement. It is distinct from position control, which is the most common way of controlling a robot.

6. Will force sensing work in my environment?

Given the sensitivity of some force sensors, you might wonder if force sensing is compatible with your specific working environment. Maybe there is a lot of dust that could get inside the workings of the sensor or there is high humidity.

Environmental conditions are certainly important to consider when choosing a particular sensing technology, but there is usually a sensor that will suit your needs. For example, FT 300-S comes with IP 65 ingress protection, which protects it from dust and can operate in humidities of between 20-80%. 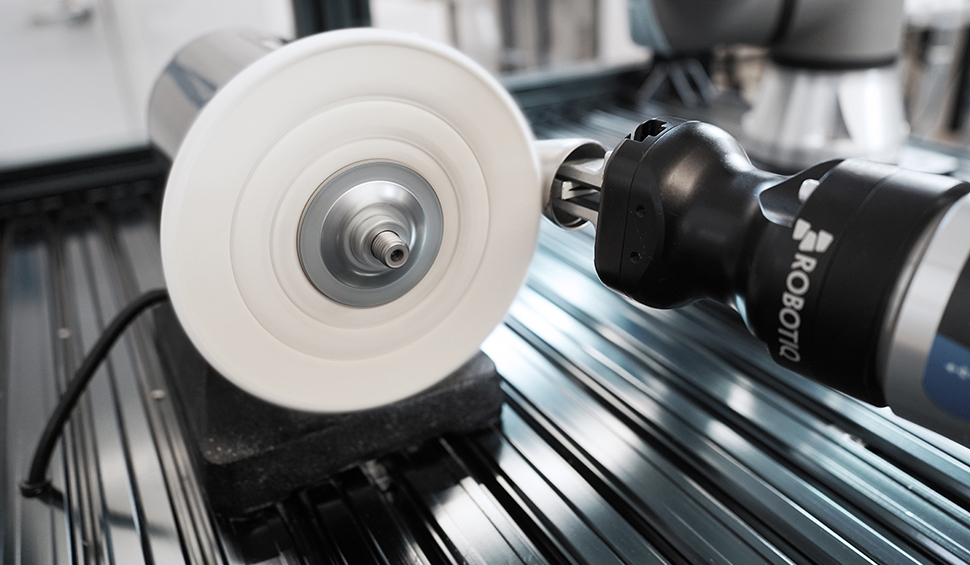 7. Will noisy environments mess up the sensing?

Maybe your work environment has a lot of electrical noise and you are concerned that it could interfere with the sensor. This is a reasonable concern as some force sensors — e.g. those based on strain-gauge technology — do not work well in electrically noisy environments.

Some sensing technologies are protected from noise.  For example, the Robotiq FT 300 uses capacitive technology, which makes it immune to noisy environments. This same Robotiq technology is used in the UR e-Series integrated force sensors.

Another common doubt about force sensing is that the sensors can't handle vibration. Some robot users have certainly found that excessive vibrations can affect the accuracy of the signal coming from a force sensor.

Vibration resistance in force sensors is a matter of degree. Force sensors will have a rating above which the sensor cannot handle vibrations. For example, the FT 300 can operate with vibrations up to 2G.

9. Is force sensing too expensive for me?

Cost is an important factor when making any decision about a new sensing technology. While some robots have force sensing already included in the robot itself, others will require you to purchase a separate force sensor to add this capability.

The most important calculation to make in this regard is a return on investment calculation. If you can demonstrate that adding force sensing to the robot application will have a measurable impact on the operation of your robot cell, then the cost can make sense.

Do you still have doubts about whether or not force sensing is right for your specific application? Tell us in the comments below or join the discussion on LinkedIn, Twitter, Facebook, or the DoF professional robotics community.