Some robot tasks benefit from the addition of force sensing. Others do not require a force sensor at all.

If you are planning to deploy a new robot to your business, you might be wondering: Will the sense of touch will be beneficial for my particular task?

A force sensor gives your robot the ability to detect and process touch signals. They are used in a variety of ways in industrial robotic applications, from collision event detection to weight verification.

There are various robot force sensors available on the market. Some are easy to integrate with your robot, others are more difficult and require specialist experience to deploy. Some robots even have an internal force sensor so you don't need to integrate it at all.

Before you choose any force sensor, it's worth understanding what makes a robot task suitable for force sensing in the first place.

Do you need a force sensor for your task?

Some new robot users assume that they need a force sensor for any task. After all, as humans, we use our sense of touch all the time. Surely, force sensing has the potential to improve all tasks?

On the other end of the scale, many people don't even consider using a force sensor for their robot. They are more likely to opt for a vision sensor, probably because the sense of sight is considered to be our dominant sense as humans.

Even if you are considering force sensing, you might be uncertain if there is going to be a benefit for your specific task.

You might wonder if there will be a noticeable effect by adding a force sensor. Maybe you think that your task is too simple and won't need the sense of touch.

What makes a task suitable for a force sensor

How can you tell if a force sensor will be an advantage with your chosen application?

It can help to get a better understanding of the specific traits that indicate that the sense of touch would be beneficial.

Some signs that a task could be suitable for force sensing are:

If your task meets one or more of these requirements, a force sensor is likely necessary. If not, a force sensor might still be needed but it depends on the application.

The 7 best robot applications for a force sensor

What are some good applications for a force sensor?

Here are 7 of our favorite robot applications that benefit from force sensing:

Surface finishing tasks like sanding and polishing require the robot to apply a constant force as it moves over the surface of the workpiece. If the finishing tool was to apply an inconsistent force, it would cause a bad quality finish.

Finishing applications either involving attaching the finishing tool to the robot as an end effector or using an external finishing tool. 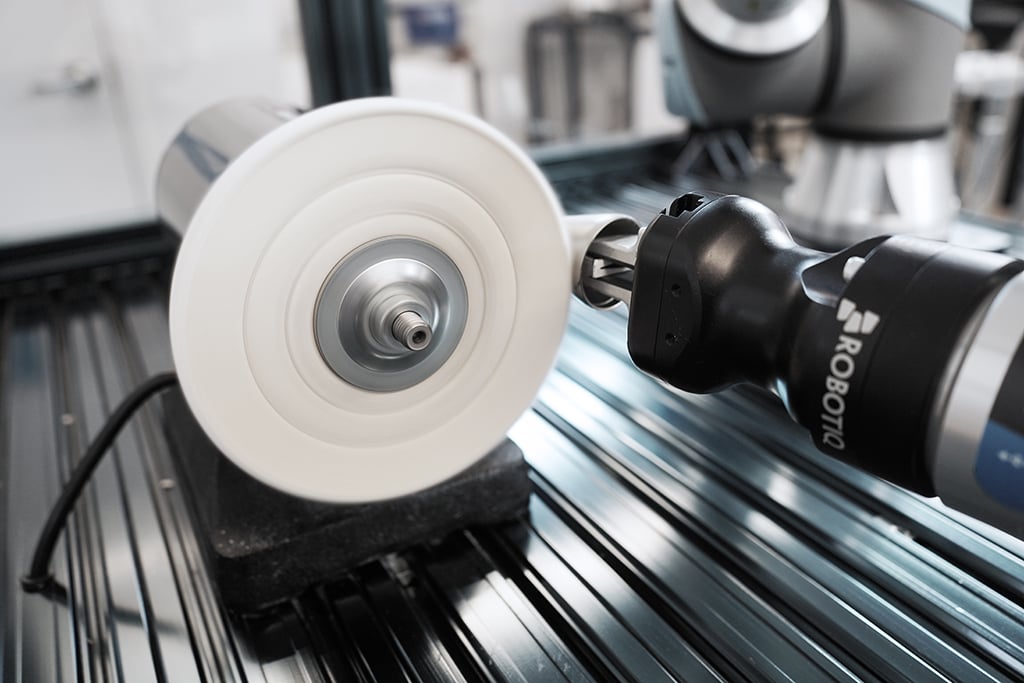 While robot vision is usually the first sense that people think of when they are looking to detect objects, a force sensor can be just as effective in some situations. A sensor can detect both the presence of the objects — e.g. when the robot collides with it — and can distinguish between objects by measuring their weight.

Another task that can require force feedback is product testing, specifically when you physically test a product for its durability. Robots provide a very flexible method for such product testing and can simulate the real strains that the product will experience when in use.

A force sensor both ensures that you do not apply too high a force on the product and allows you to log the forces applied over the testing procedure.

Process tasks like grinding and other forms of machining often require force feedback to ensure a consistent force is applied to the workpiece. Such tasks often produce a lot of dust. As a result, you will need a force sensor that has dust protection. This is also the case with sanding applications.

The new version of our force sensor, the FT 300-S, now comes with an IP-65 rating, making it impermeable to dust.

Fine assembly tasks often require force feedback to aid the insertion and removal of parts. For example, the Spiral Search feature for UR robots gives the robot the ability to detect the precise position of a hole when inserting a peg into it using only the information from a force sensor.

You might not think of palletizing as a task that benefits from a force sensor. It's certainly true that not all palletizing tasks will need one. However, force sensing can add extra capabilities to a palletizing robot.

A common machining task for collaborative robots is deburring, where rough edges of a machined workpiece are smoothed using a deburring tool.

A force sensor is usually required for deburring to ensure that the robot applies the correct force consistently along the machined edge.

As with the task of grinding, you may need a force sensor with a suitable IP rating to ensure dust does not enter the sensor during a task like this.

Is your application not listed?

If your chosen application is not included in this list, it doesn't mean that a force sensor is unnecessary.

Many applications can benefit from using a force sensor.

Just get in contact with us if you have any doubts over whether your application needs force sensing.

And, if you think a force sensor is right for you, make sure to check out our new FT 300-S, the latest version of our highly popular force sensor designed specifically for robots.

Which application are you considering using a force sensor with? Tell us in the comments below or join the discussion on LinkedIn, Twitter, Facebook, or the DoF professional robotics community.