Robotiq was born out of a research project at Laval University in Canada. Our vision of robotics has taken a more industrial direction, yet we are still really popular in the research world. With the new FT 150 Force Torque Sensor we have had demand from different universities to do a variety of projects. Here are some of the research areas that use the FT Sensor.

As the FT sensor is relatively new and the projects are in R and D there isn't a lot of video footage or even images of actual applications. However, other examples can demonstrate the applications.

The main goal of research is to innovate, right? With the rising popularity of collaborative robots,  projects involving human-robot collaboration are becoming more numerous. However, using a cobot to do human-robot collaboration is not really innovating. This is why some of the research projects use the FT sensor with a full-size industrial robot. As normally this kind of regular industrial robot are used with fencing and are remote from humans, it is an innovation to bring this kind of robot into a work area that includes humans while teaching it some tasks. The FT sensor is essentially a 6-axis force and torque sensor. This means that a human can apply forces and torques on the robot tool and the sensor can sense them. With that said, you can program the robot to react to these forces. In fact, if the human applies a force in the X axis, the robot can unlock its joints and let the human move it along this axis. This is used to teach paths to the robot. By doing so, the robot is able to ''learn'' the path without having to go through complex programming methodologies.

A good example of this application would be Kinetiq Teaching. This software/hardware solution is designed to teach robots how to weld. The process is not considered a collaborative use, but it does use the force torque sensor to show the robot via gesture the path that needs to be executed. Watch the following video to have a better idea.

Of course, one of the first ideas for our FT sensor was to do assembly tasks. This process is relatively complex and relatively new in the robotic world. Universities and companies are working together to develop and enhance this process that is still embryonic. 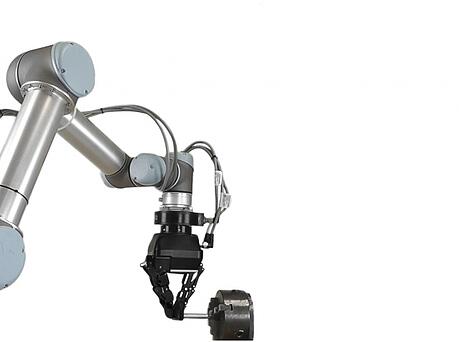 From car door assembly to applying adhesives, robots are already used in a wide range of applications in assembly lines. Still a lot of car companies are joining university robotic departments in order to have the latest help in developing assembly processes that are viable for their assembly lines. Notice that every step of the production can be studied. The advantage of using a force torque sensor in these applications is to control the force on a given motion. For example, if a certain material has to be applied with a 50N force, generally people are not good at doing this precisely. A robot can do it with more accuracy. The FT sensor is programmed to have a 50N threshold and not to go beyond this value.

Another example of force limited applications would be inserting one part into another part, a simple assembly task! For a robot this can be quite complex, though using a Force Torque Sensor allows the robot to sense if the part is inserted correctly into the other part or if it is hitting a wall. Applications like these are really popular in research, because they can innovate different processes and make them more efficient.

This is one of the more interesting applications. In fact, force feedback has a very wide definition. It would be hard to detail all the potential applications that could benefit from force feedback. The general idea is that when the tool detects a force, it returns a signal (intensity and direction of the force) to the controller and the program ''decides'' what to do next.

In the following example, the FT 150 Sensor is paired with a 2-Finger 85 Adaptive Gripper and they have to detect the position of wooden blocks, then pick and drop them in a receptacle. The robot is scanning the axis and detects the object once the force threshold is reached. In this case the threshold is set at 0.5N.

Universities are always helping to evolve the robotic world. Teachers and students always raise the complexity level and it is from this kind of research that the most innovative industrial projects come to life. Maybe this article will give you an idea for a university project , then you can give me part of the patent credit ;-)

To learn more about the FT 150 Force-Torque Sensor, follow the link below.