Force torque sensors are commercially available in many sizes with various measurement ranges. They provide precious input to the robot controller, which uses this information to modify the robot’s behavior in conformance with its pre-designed task. These sensors increase the robot’s sensitivity in a variety of applications. In this article, we discuss some of the most common applications and uses for force/torque sensors.

Basically, there are two ways of seeing a robot arm, i.e. either as a machine which position and orient an end effector or as a machine which applies forces and torques to its environment. For some reason, which I suspect is highly related to the fact that position is easier to measure than force, most applications requiring precise trajectories use the positioning measurements method which were developed decades ago, whereas force related applications are not as frequently used. However, there are numerous robotic applications where force/torque feedback clearly has an advantage over positioning measurements. Let’s take a look at a few of them.

In manufacturing, there are many processes which require the application of a precise force in order to achieve quality results. You will normally have dedicated machines (i.e. other than robots) for high force operations such as stamping/bending. However, some finishing applications like deburring, grinding and polishing can benefit from being automated too. By using a robot, increased uniformity can increase quality, as well as reduce costs (not to mention the frequent injuries arising from operations such as manual polishing). Notice that a force torque feedback is often required to obtain precision in these tasks.

When we insert a key into a keyhole, we do not aim perfectly for our target hoping that we will get it straight in. Instead, we usually do our best with the visual feedback from our eyes to get close and then we wiggle it around until it gets in. To perform that "wiggling", some kind of force feedback is required: we need to know that we have touched the object but that we are not damaging it. It is the same for robotic assembly: most of the time, the required fit for the insertion is too precise for visual feedback alone, therefore using a force/torque sensor is often a better solution.

When robots are controlled at a distance by a human operator (think of the manipulation of radioactive waste), it is often desirable to include some force feedback. This allows the operator to manipulate objects in a similar fashion to real life instead of relying on visual feedback alone. Yet when telemanipulation is performed over a large distance, challenges can arise due to delays in the force/torque signals. 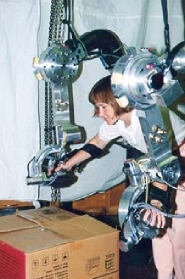 Human augmentation (in the context of robotics) is the artificial increase of human performances using robotic systems. This includes exoskeletons, which enable humans to carry heavy loads long distances, and robotic prostheses, which enable people with disabilities to perform normal, day to day activities. A more industrial application is called Intelligent Assist Device (IAD), a machine which helps factory workers to lift and displace heavy objects. To achieve human augmentation, it is often required to measure the force applied by the operator in order to compute an output velocity which in turn will be sent as a command to the robot. This output velocity is determined according to a virtual model which enables the user to move the system (robot + payload) with the same effort as if the worker was moving a small mass.