Robot Force Torque Sensor - How does it work?

We recently release an article on ''What is a Force-Torque Sensor''. Now that you know what a FT sensor is, we thought that you might be interested in the basics of how these devices work.

Most robotic applications require a multi-axis or 6-axis FT sensor to give feedback to the robot about the tool itself which can be controlled along 6 axes (3 translations + 3 rotations). A 6-axis FT sensor means that the sensor can measure both the force and torque along the 3-axis (x-y-z). These are usually defined by the components of Fx-Fy-Fz and Tx-Ty-Tz. To measure the effort in all six axes, the force-torque sensor usually combines information from a minimum of 6 unitary measuring elements such as strain gauges. Using the geometry of these elements and the physical properties of the material on which they are installed, we can compute the force and torque along the axes which are meaningful to the robot control loop. When installed on the robot flange, the integrator needs to set the parameters for the relative position and orientation of the sensor with respect to the robot tool.

As you can see in the picture, the sensor is between the robot wrist and the tool. This position allows the sensor to feel the force and torque applied on the tool. 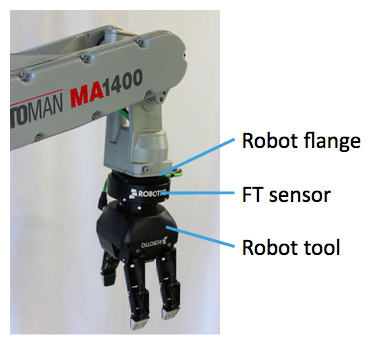 There are various way to measure a force, generally most of the sensor manufacturers use strain gages with a specific orientation. Having a certain number of gauges would give enough information to the controller/computer to determine the intensity and the direction of the force/torque. Some FT sensors use gauges that digitize the measurement from the start, getting rid of the possibility of electromagnetic noise sensitivity interference, which is an issue experienced with traditional strain gauges.

FT sensors will output either analog or digital signal. The signal is the communication method sent to the robot via an analog or digitized input and sent over a field-bus. Analog signals are not ideal in the typical industrial robotic environment which are known for their high level of electro-magnetic noise.  For example our FT sensor that is used with the Kinetiq Teaching technology is using a digital signal and is not affected by the electric motors or welding torches used in the welding process. This increases their accuracy and makes them more reliable.

Using the force-torque sensor feedback in the control loop

Most robot manufacturers provide software packages that use the information from the sensor(s). This allows the integrator to program the robot using high level commands. An example might be to do polishing or assembly.  A skilled integrator can also access the force-torque data from the sensor and specifically program the desired control of the robot arm and end effector. In these instances the output of the sensor is used to close the loop in the controller, adjusting each of the joint's torque to match the desired output. Robot force control is useful in applications where the robot needs to interact with a rigid environment or fixtured workpiece. These are cases where the robot needs to be reactive to its environment. Though ideally we would like all robots to be reactive to their environments all the time and the move towards collaborative robots is a move in this direction. Yet, being able to give industrial robots this flexibility will be a great boon to industrial robots.