What's the Potential of Force Torque Sensors in Collaborative Robotics?

Why should a manufacturer put a force torque sensor on a collaborative robot? Robotiq's CTO Jean-Philippe (JP) Jobin had an interesting chat with Engineering.com's Isaac Maw last week. They spoke about Robotiq's FT 300 Force Torque Sensor and the engineering behind it, as well as the future of force-sensitive applications.

Since manufacturing environments are generally noisy, it's key for the sensor to be immune to outside interference. That's why Robotiq developed a digital force torque sensor (and thereby avoided having to deal with analog signals, which can be influenced by external noise). 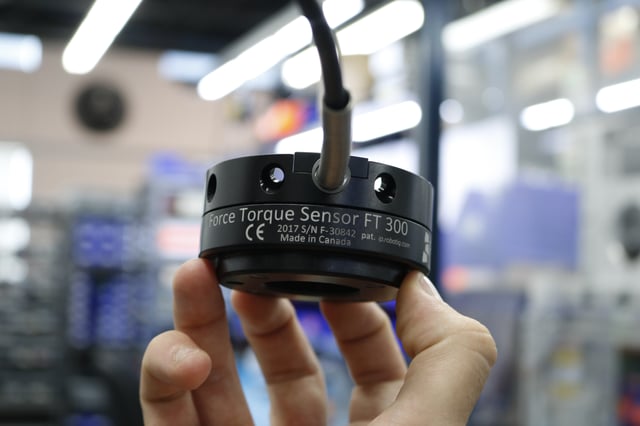 So why put a FT 300 on a collaborative robot? JP gives a great example in the article: “At each of the six joints of the robot, the manufacturer has a torque sensor measuring 1 axis of effort. This measurement depends on the mass and geometry of the robot. If you want to measure the force applied accurately or repeatably, you need to do some approximation of the mass and configuration. You don’t get good results by measuring each and every joint, especially not at low cost."

He goes on to say that getting great results requires expensive torque-measurement equipment (like the KUKA iiwa); which is why "the best way to do it, in our opinion, is to keep a low-level precision force control for safety and get a high-precision sensor at the wrist, where it’s needed.”

Collaborative robots can achieve much more when equipped with many sensors. As JP explains, “There is an advantage in getting the sensor and the end-effector from the same supplier. We have software for the specific application data from the gripper and sensor. It’s a limited advantage at this point, but in the future, it will increase. We also have a camera, and we want to combine the three in the future for better functionality.”

Each end-effector can accomplish a lot more that we might first have thought. Whether we're talking about grinding, deburring, product testing, assembly, or machine tending, the possibilities for the FT 300 are almost endless . Read the complete article for more examples.

This view on the future of sensors brings us to another conversation that also took place last week: this one was between automatica's Ivanka Stefanova-Achter and Robotiq's CEO (and author of Lean Robotics), Samuel Bouchard.

Regarding the future of collaborative robotics, Sam offered an optimistic view of what to expect. “Right now, we’re still using very low-level instructions to operate collaborative robots. It requires a lot of expertise. If robots can have a higher level of abstraction, it’s going to be much easier to collaborate. The challenge is to put more intelligence into the different components. Our goal at Robotiq is to empower businesses by showing them how to install robots by themselves, thus helping them to overcome workforce challenges, including a shrinking labor pool. Obviously, the real goal is that we need to collaborate seamlessly.”