Hi!  In this week's news, Hahn Automation opens its 1st U.S. facility, India sees record robot sales and a new tool scans for hackable industrial robots.  We also meet a shape-shifting medical microbot, marvel at a Norwegian humanoid and find out why usually well-behaved robotics researchers have been kicking ANYmal around... 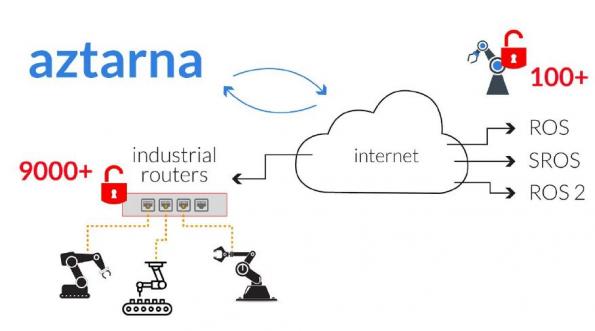 [...]  a first scan using aztarna revealed close to 9000 insecure industrial routers potentially hosting more connected vulnerable robots. [...]  1586 of those insecure routers were in Europe, with France and Spain leading the ranking of misconfigured devices at 63% and 54% respectively. North American countries such as the US and Canada also showed a large proportion of misconfigured industrial routers.

Meanwhile, The Wall Street Journal noted that while 5G promises to bring many benefits to manufacturers including real-time systems analysis, it could also make industrial robots "a lot more vulnerable" to hacking.

Visitors to to the National Manufacturing and Supply Chain Conference 2019 in Dublin, Ireland were served bottled water by a cobot from Universal Robots equipped with a Robotiq gripper...

Hahn Automation Group (HAG) --the German firm that recently purchased Sawyer cobot technology from Rethink Robotics-- has officially begun manufacturing at its new factory in Windsor, Connecticut, U.S.A.  HAG owns three robot companies for plastics processing – Waldorf Technik, Wemo and GeKu.  The new facility will manufacture GeKu and Waldorf Technik products and act as a distribution center for Wemo, according to a report in Canadian Plastics.

T&W Stamping in Ohio automated tending of resistive welders using a UR5 cobot from Universal Robots.  The cobot paid for itself in less than four months, delivered a 40% increase in efficiency and freed up three human operators to work on other tasks...

Sales of industrial robots in India reached a new record of 3,412 new units installed in 2017, according to new figures from the International Federation of Robotics --an increase of 30 percent compared to 2016.  The country saw a compound annual sales growth rate of 18% between 2012-17.  The auto sector accounts for 62% of the total supply.  (H/T AssemblyMag)

Bots Automation released video of a Universal Robots cobot that they set up to handle camera equipment...

Production of industrial robots in China fell by 12.1 per cent in December from a year earlier after a drop of 7.0 per cent in November, according to data published by China's National Bureau of Statistics this week.  (H/T South China Morning Post)

China --and other East Asian nations-- understand the need to "modernize or perish," according to a fascinating piece in Asian Robotics Review, but modernization means different things in different places:

China needs to step up robot-driven automation, and move low-value manufacturing out, hopefully somewhere nearby to maintain complex supply chains and control.  Low-value manufacturing can be moved out of China relatively easily.  It’s already being shifted to nearby countries such as Vietnam, Thailand and Indonesia.

New video shows cobots at Airbus being tested to see whether they can handle helicopter test flight management tasks...

Governments, employers and unions need to adapt to revolutionary changes in the world of work, according to a new report from a commission set up by the International Labour Organization.  Via Reuters:

[...] one of the questions raised most often about the future of work is: “Will my job be lost to a robot?” but the commission preferred not to take a binary view of technology in which “it’s us or them”.

In other manufacturing & cobot news...

It's often observed that robots are particularly suited to tasks that are dull, dirty and dangerous (the famous 'Three Ds'),  but it's not every day that a robot manages to simultaneously help out with all three.

One such bot can be found in the storm drains of Mumbai, India however, where city officials have turned to automation to help remove silt from a stretch of drain that's inaccessible to human workers.  During its mission, the bot discovered a broken pipeline, an illegal sewage connection, crossing cables, and other issues. 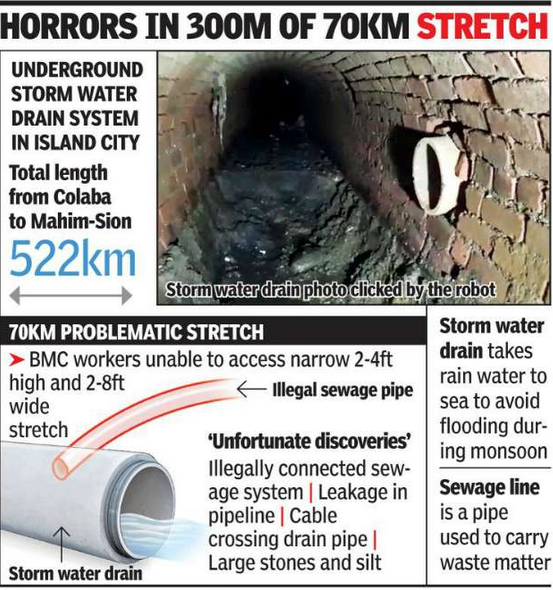 Credit:  The Times of India

The robot, fitted with a camera, uses a suction system in the drain after negotiating minor hurdles.  An operator examines visuals on his computer screen and accordingly directs the robot to apply water pressure to clean the silt.

Designers working on humanoid bots should study body language and anatomy "in collaboration with choreographers and dancers, whose qualitative and embodied expertise is a wealth of overlooked knowledge," according to Amy LaViers, director of the Robotics, Automation and Dance Lab at the University of Illinois.

In a thought-provoking long read published in Nature, LaViers argues that humanoid robots' use of body language would be more effective if robot designers took their lead from outside disciplines, including animation and social psychology:

Whereas the Atlas robot has 28 coupled moving parts, animators use tens of thousands of parameters to simulate how people breathe. We respond differently to an outstretched hand depending on whether it has tensed or soft forearm muscles. And meeting someone who is holding their breath is less welcoming than being greeted with an exhale.

With news this week that rival delivery bots are also arriving at George Mason University (Starship Technologies) and the University of the Pacific (PepsiCo & Robby Technologies), a question posed by Forbes this week seems particularly timely: 'Is 2019 The Year That Robot Delivery Takes Over The Retail World?'

Hope you can join next week for more of the latest robotics news!  Until then, please enjoy...

1.  Scientists at EPFL and ETH Zurich have created tiny, bacteria-inspired bots that can change shape depending on their surroundings enabling the devices to reach hard-to-access areas of the human body.  If further tests are successful, the bots could be used for targeted drug delivery.  (H/T Inverse)

3.  Robot builders use a combination of strategies to help 4-legged bots pick themselves up after a fall.  Fancy simulation software, for example, enables rapid testing of different scenarios and (when combined with a neural network) also enables the creation of smart algorithms to deal with the challenge.  But simulation software is not an effective substitute for real-world conditions, so from time to time even the best-behaved robotics researchers have to kick robots around.  For science.  (H/T MSN)

4.  Flying into Gatwick, London in August 2019?  Make sure to check out 'Stan' --a valet, car-parking robot developed by French firm Stanley Robotics-- during its testing phase.  (H/T Daily Mail)

5.  Researchers at Sweden's Luleå University of Technology released video of the 'Vortex' inspection robot in action.  Built as part of the EU-funded CompInnova project, Vortex is designed for airplane inspection and repair.

By Romy A Letourneau - September 23, 2019
END_OF_DOCUMENT_TOKEN_TO_BE_REPLACED