Robotics in 2023: What the Latest World Robotics Report Tells Us

The use of robots and automation continues to grow at an impressive pace. But what can we expect in 2023? The latest World Robotics Report gives us some clues as to what we can expect.

The World Robotics Report provides an overview of the current state of robotic automation around the world. With the information it presents, businesses like yours can get a better understanding of how robots are being used and where there is potential for growth.

As Marina Bill, President of the International Federation of Robotics states in the report "The use of robotics and automation is growing at a breathtaking speed."

Here are some of the key learnings from the World Robotics Report 2022.

What is the World Robotics Report?

The World Robotics Report is an annual report produced by the International Federation of Robotics (IFR). It tracks current market trends in the robotics industry and forecasts sales of robots globally.

This year is interesting for many industries. We are only now beginning to see the effects of the 2020 global pandemic on company uptake of robots.

Here on the Robotiq blog, we often publish articles that track changes in the robotics industry. For example, in our review of the World Robotics Report back in 2016, we made our own predictions about the future of robotics for the next 10 years.

Robots at an all-time high: Overview of global installations

One of the key trends from the report is that robot usage is currently at an all-time high. This makes sense as robot usage has been steadily growing for years now.

The year 2021 saw the robotics industry hit a new milestone in its history, with a record 517,385 new robotic installations worldwide. Various countries around the world are now investing heavily in automation to remain competitive in the current economy.

Many factors, which vary depending on your industry, caused this surge in robot installations. Some factors include labor costs and skills shortages. These combine with advancements in technology that make robots cheaper and easier to use than ever before.

Robot density: The measure of robots to people

Generally, the higher the robot density, the more prominent robots are within that industry.

According to the report, the average robot density in the manufacturing industry was 141 robots per 10,000 employees. This represents 1 robot for every 71 employees.

Uptake of robots also varies across markets. In 2022, the markets with the top 5 robot densities were:

In some of these markets, this represents a lot of robots! In the Republic of Korea, there is now 1 robot for every 13 human workers.

Asia is still the largest market for industrial robots

Asia remains the largest market for industrial robotics, with no signs of slowing down.

In 2021, over 74% of all newly deployed robots were installed in Asia, with China taking the lead as the primary adopter. This marks an increase in global robot installations for the third consecutive year.

China has made significant investments in robotic technologies to boost its manufacturing capabilities. Other countries in Asia are also following suit, with South Korea and Japan also becoming key players in the robotics arena.

We expect the Asian robotics market to maintain its growth trajectory over the next few years.

The top 5 industries for robotics in 2022

Which industries have adopted robots more?

The top 5 industries for robotic adoption in 2021, as shown in the report, were:

It's clear that robots will continue to play a major role throughout all industries in 2023 and beyond. With the arrival of simple robotic hardware, we are already seeing companies from across industries starting to add robots to their workflows. 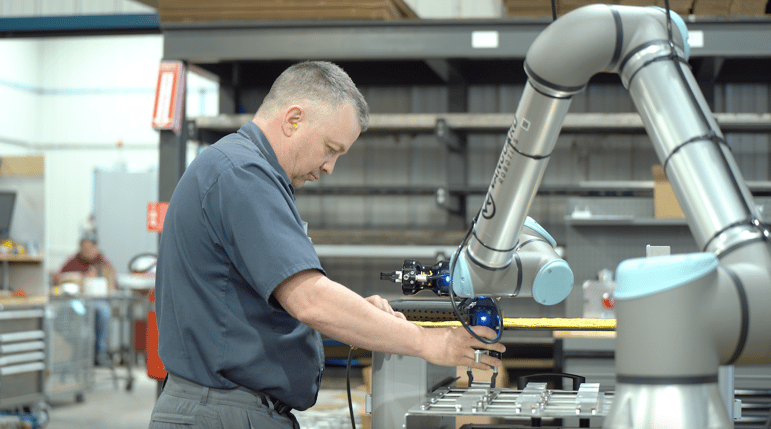 What the data means for your business's robot adoption

How can you best use the information from the latest World Robotics Report to decide if robots are right for your business?

One conclusion we can draw from the report is that robots are becoming increasingly accessible and affordable. They are now a viable option for businesses of all sizes.

If you aren't using robots yet, and especially if you operate in one of the high growth regions of the world, such as Asia, it's useful to know how many companies are adopting robots. Be sure that many of your competitors probably are using robots already.

With careful planning and deployment, your business stands to benefit greatly from introducing robots to your workflow. So don't hesitate to take advantage and add some robots!

What trends do you see happening in your industry? Tell us in the comments below or join the discussion on LinkedIn, Twitter, Facebook, or the DoF professional robotics community.