No risk of collisions at this job but he’s still pushing it to the max: Meet David Maltais

Today, Robotiq counts nearly 100 full-time staff, with our Grippers, sensors and software operating in 52 different countries. For more than two years, we’ve been telling the stories of our team members.

Speed defines much of David Maltais’ life. From a young age, he adored watching Formula One drivers deftly handle a racetrack. Not able to sit still as a youth, he cycled down the sides of forested mountains, then road-raced his way through his late teenage and early adult years. During his two and a half years as a journalist at the French-language arm of the CBC, that sense of speed continued, as he filed numerous, quick-turnaround stories for the network’s TV, radio and digital services. 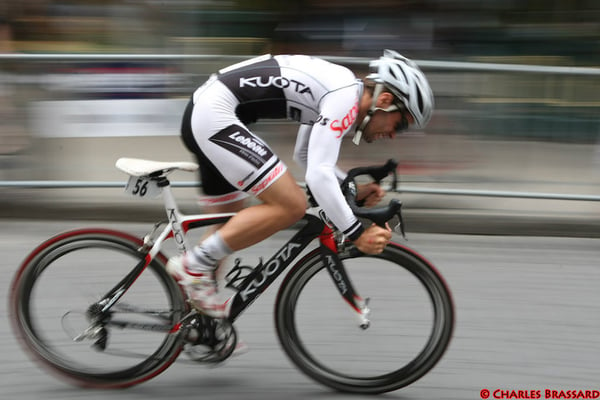 Today that speed is more of a productive intensity. He manages Robotiq’s blog, which posts an original article every day and monthly e-books. He also handles internal communications for the company, puts out public messages and writes and shoots videos detailing how some of the company’s customers have automated their factories.

There’s both an easy self-confidence and a sense of humility in the single, 28 year-old, which appears to blend well with the Robotiq culture. The company, David says, brings out the best in people but it also plays a long game, affording people the time they need to grow into and become really good at their positions.

And, for David, being good at that position is creating content that will connect with clients. He seeks out what the robotic user is searching for, while not relying on the popularity of past subjects. To do that, he confers with his writers, researches his companies, speaks with his colleagues and sees how other marketers are tackling the same challenges. And then gets right on it, with that trademark speed.

David was born in the remote Quebec town of Chibougamau. At six, he and his family moved to the Saguenay, a region he loves to this day for its early pioneering spirit, its industriousness and, most notably, its landscape. “It's a really beautiful region, with lakes and fields, and forests surrounded by mountains.”

That unique geography led to his years of biking. With energy to burn, he would race his friends in the woods. More serious about it than the others, he would end up winning all the races. 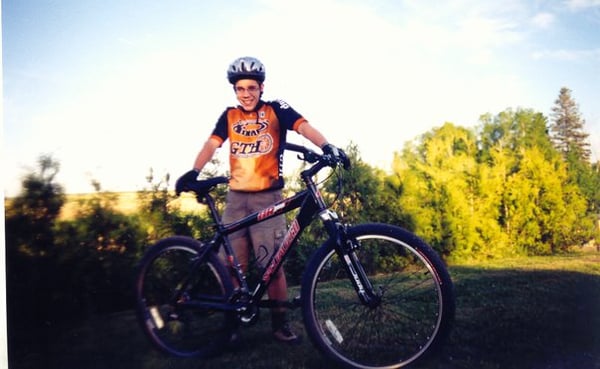 His father worked for Hydro Quebec as an electrical technician in charge of the entire Saguenay region. While his father was more of a natural engineer, his brother became one. Both had similar ways of thinking. “They’d solve problems and were never satisfied until it was perfect.”

His mother worked as a nurse in a variety of areas, from a clinic to the hospital’s emergency room and from being the school nurse to treating the elderly in their homes. “She’s able to feel what a person is going through, tries to help and then leaves them in a better place. That's something that helped me a lot in my first job as a reporter.”

She is also a stickler for language and would even give David and his brother and sister French dictation quizzes every evening. He would end up finding a facility with language, which steered his career toward communications.

He loved science, math, French and history, and got good grades at school. “But I hated it,” he confesses. “I was sitting all day. I wanted to go outside.” Some of that was solved in Grade 9 by his enrolling in a sports-study program. Half the day was dedicated to sports, his chosen sport being cycling, and the other half to studies.

Being more of a sprinter than a climber, mountain biking would eventually give over to road racing, which he would continue into his twenties, winning several competitions.

With all this racing, were there any collisions?

One of his worst took place at 16 off the racing circuit. He hit a pothole in his neighbourhood. His chin struck his handlebars and he ended up losing all of his back teeth. He almost broke a knee during a cross-Canada biking tour with his brother at 21 and broke a collar-bone in a high-speed road race crash . And there were many smaller crashes along the way. 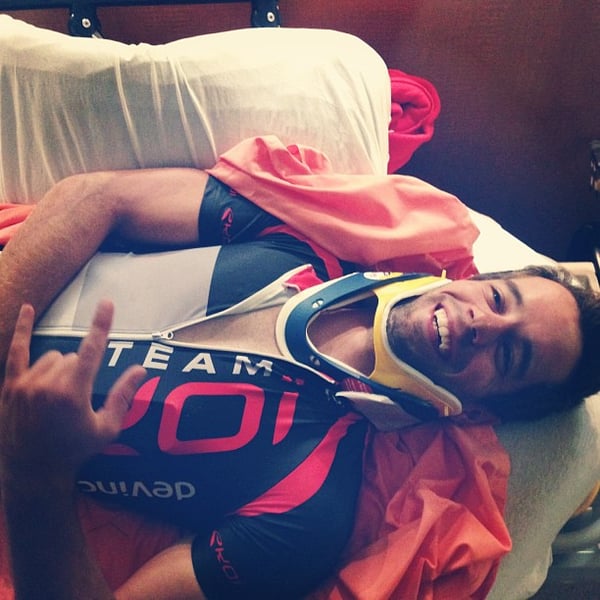 Toward the end of high school, knowing he had to choose a subject area, David was intrigued by a three-year arts and technology program in Cegep, Quebec’s junior college.  He spent much of his time learning journalism, discovering a love for the press conference and regional politics. For his final assignment, he did an investigative piece on performance enhancing drugs in Quebec sport. Athletes, doctors and coaches opened up to him and he discovered how pervasive doping had been in his sport of cycling.

For university, David took a jump out of his comfort zone and decided to attend law school. “It was a nightmare,” he confesses. He had thought it would be a good way to combine his love for politics and guarantee some stable prospects. But, while he appreciated the stimulating lectures, he was less enamoured with his fellow students who he says were focussed on money. Throughout his time at law school, he stayed involved in competitive cycling and writing about it on a blog. That blog would grow and help him become a content creator.

After graduating from law, his interest in journalism remained strong. He landed a reporting job at the French-language arm of the CBC in the Estrie region, two hours outside of Montreal. In the summer of 2013, the rail disaster struck at Lac Mégantic and he was filing stories nationally on all platforms. He was then hired in New Brunswick, and when three RCMP officers were killed by a lone gunman, he found himself again filing national stories. 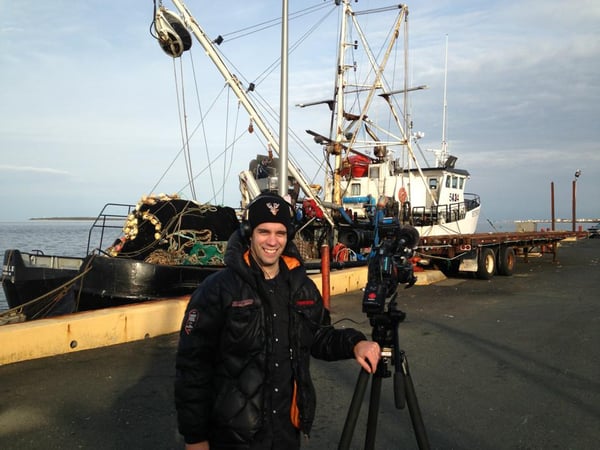 But the work took place amid job cuts at the network and unending demands for radio and TV reports, print stories and social media posts. He couldn’t imagine himself continuing this job for years.

Still cycling, he found out that one of his bike sponsors, Louis Garneau, was looking to replace their communications coordinator who was going on maternity leave. He was hired and happy to be doing this kind of work. “It was my dream job. I was really in my element,” he said, referring to the fact that the company sells cycling gear.

After the person on leave returned to work, David moved into content creation. But not long after, his friend and Recruitment and Culture Coordinator, Andréanne Pichette, informed him of a similar job at Robotiq. He loved the work at Garneau but felt that Robotiq, with its rising success and its work in engineering, something he had always been around, was an opportunity he could not turn down. He got the job at Robotiq.

When he arrived at Robotiq, he saw a modest-size business with a great output. He’s reminded of a quote from Electronics Designer Sébastien Bélanger. “When you work in a small company, you need to be good,” Sébastien said in the profile published early last year.  He was impressed with how the company brought out the best in people. “People were focused and aligned, and able to deliver ideas.” 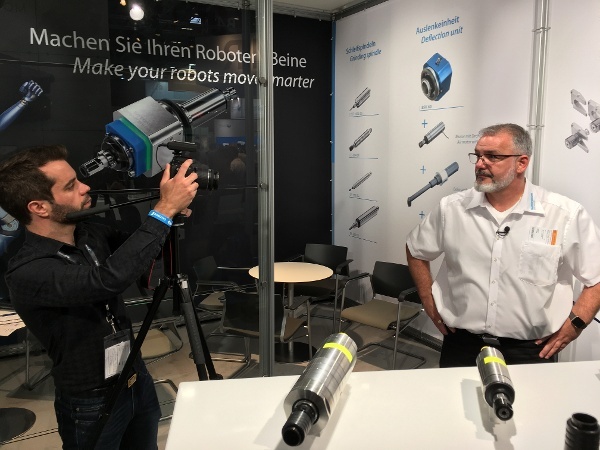 He says Robotiq gives its employees the space to learn their jobs. David tries to show recent hires the same patience his colleagues showed him. He sees an open-mindedness in the company, with ideas welcomed across departments. He says no one is scrutinizing your every move, and work is organized around deliverables.

David has been impressed with how much content the company delivers and how it uses that content to attract customers. The company he came from was also posting content but not aligning it as well with their company’s focus.

He has been helping that focus, talking to robotics media about what the company is doing and to end users about what they are reading on the blog and looking for. He gets a variety of topics sent to him from his team of writers and from end users. It runs the gamut, from the technical-issue pieces for people needing advice on how to work their robotics to addressing fears of robots stealing jobs.

More recently he’s been focusing on erasing divisions between some departments. “I’ve been taking the message from engineering to sales.” He learns as much as he can about the products’ benefits and uses that knowledge in content creation, whether that’s in the videos he shoots, the stories he writes, the sales documents he draws up or the pieces his writers create.

His father came to visit a recent Robotiq open house and was impressed with the robotics. David, who has always found himself gravitating toward engineering types, was happy to see the man who taught him the basics of science seeing him working around robotics. 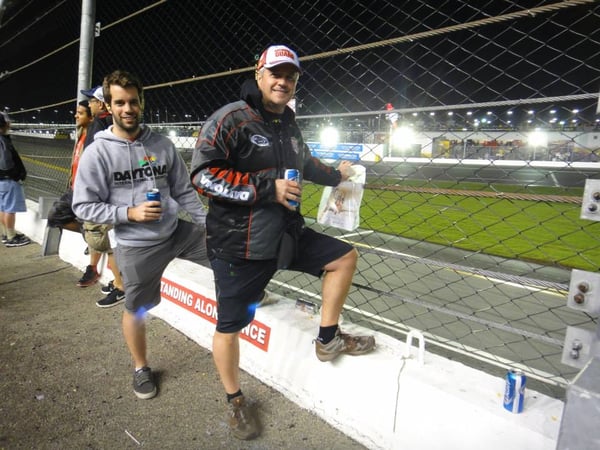 David and his father Luc at one classic car racing event: the Daytona 500

David is still involved in cycling but more as part of his triathlon training. Barreling down mountains and roads is an important part of his past. It’s also part of the journey that brought him to content creation, where, like that speed-demon athlete, he continues to push himself.

By Romy A Letourneau - March 6, 2019
END_OF_DOCUMENT_TOKEN_TO_BE_REPLACED

By Romy A Letourneau - February 27, 2019
END_OF_DOCUMENT_TOKEN_TO_BE_REPLACED

By Romy A Letourneau - February 20, 2019
END_OF_DOCUMENT_TOKEN_TO_BE_REPLACED