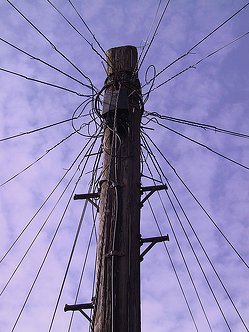 We, at Robotiq, believe that the product should adapt itself to the customer, not the opposite. This is also true for the mechanical interface, as we adapt our Gripper faceplates to fit any robot wrist. But it is more importantly true for the communication protocol which will be used to send commands to the Gripper and receive its status. We currently support six widely used communication protocols: Ethernet/IP, TCP/IP, DeviceNet, CANopen, EtherCAT, RS-232. This flexibility makes our Grippers easy to interface without the need of a converter or other complicated gizmos. Let's take a quick look at each of them.

Ethernet/IP (IP stands for Industrial Protocol) is one of the real-time ethernet family of protocols and is managed by the Open DeviceNet Vendors Association (ODVA). It is widely used in the industrial world as some robot manufacturers offer it with their controllers. However, it can be a costly option if you need to add it to your robot, though it is appreciated for its robustness.

TCP stands for Transmission Control Protocol whereas IP stands (in this case) for Internet Protocol. It is the exact same protocol that is used for downloading web pages on the internet and as such a Gripper using this protocol could be connected to a router at your office and be controlled by any computer connected to the network. The exact name of the protocol is Modbus TCP because the data is transfered using Modbus frames encapsulated in TCP packets.  It is a very flexible protocol often used in the academic world where custom-built robots are controlled with standard PCs. However, it is also used with some industrial robot controllers.

DeviceNet is another protocol managed by the Open DeviceNet Vendors Association (ODVA). It is mainly used in industrial environments as it is robust and easy to configure. Some manufacturers (for example, General Motors) are using DeviceNet extensively for their device-level networks. It uses a Controller Area Network (CAN) bus, making it low cost and robust. DeviceNet has some advantages, such as the fact that small devices (limit switches, for example) can be powered directly from the CAN bus.

CANopen is a communication protocol which also uses a CAN bus. However, as opposed to the DeviceNet protocol, the bus is not powered. CANopen is widely seen in the automation world when, for example, a master controller directs many small devices. However, it is not often used in conjunction with standard robot controllers.

EtherCAT stands for Ethernet for Control Automation Technology and is a member of the real-time ethernet family. It is very simple (as opposed to the other ethernet protocols) which allow it to have very short cycle times and low communication jitter (delays in periodic communications). It is therefore a very high performance yet low cost communication protocol. The EtherCAT Technology Group (ETG) has over 1350 member companies in 50 countries (including Robotiq). It is used in various industrial environments, particularly when high communication speed is required.

RS-232 is a very simple protocol that was used widely a few decades ago (remember the COM port on your old computer?). However, it is still used today due to its simplicity and versatility. All our Grippers are equiped with the RS-232 protocol through their auxiliary USB port (a chip converts the USB back to RS-232 inside the Gripper). This auxiliary port is used to configure the main communication protocol, but it can also be used to control the Gripper directly. It is also possible to use RS-232 as the main communication protocol for the Gripper. Another name for this protocol is Modbus RTU because the commands are sent to the Gripper via RS-232 using Modbus frames.

Well, that was a very quick summary of the communication protocols we currently support. Please tell us if your protocol is not on the list! 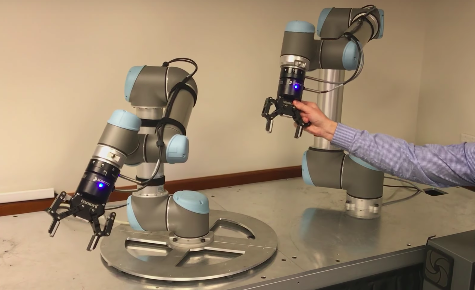 Allow Your Universal Robots to Communicate with One Another How to Control a Robotiq Gripper

At Robotiq we have been driven by the goal of making robotics integration achievable with the minimum robotics knowledge... RS485 vs Ethernet: Which One is Most Used in Industry?

While Ethernet is the most commonly used communication protocol among multiple types of devices, ranging from consumer gadgets...

By Sebastien Bélanger - May 25, 2015
END_OF_DOCUMENT_TOKEN_TO_BE_REPLACED