This is the norm used to define the repeatability and accuracy for the end-of-arm position of robots. Let’s start by clarifying some definitions. 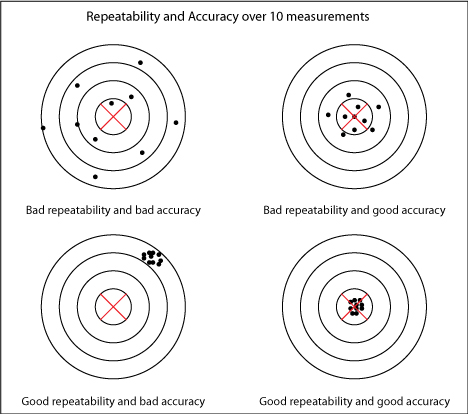 The ISO 9283:1998 standard measures the repeatability and accuracy at pessimistic values, using maximum speed of operation and maximum payload. Here is a simplified summary of the protocol:

Here is the calculation method to be used to obtain the repeatability from the data: 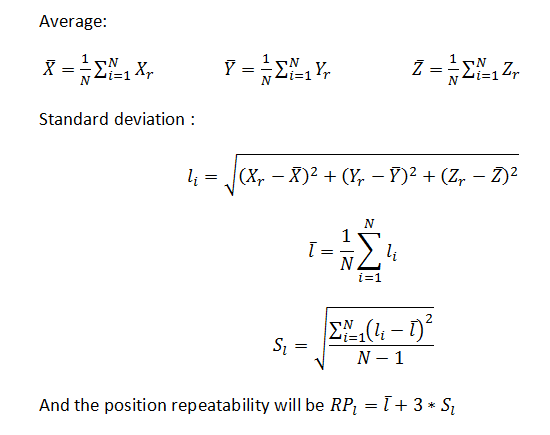 According to statistics theory, using this formula, it means that the position of the robot will be 99.8% of the time inside the repeatability range.

The methods and testing conditions of the ISO norm are elaborate and complete but they are not meant for grippers. In fact, gripper manufacturers can still use some parts of the ISO norm but each of them adapts it their own way. Even for robots, only about 10% of companies use the complete ISO norm since it is a complex (and costly) method. So we can assume that compliance is even less for grippers.

There are two major differences between robots and grippers when it comes to repeatability:

1. Robots have many axes while grippers only have one. This in fact only simplifies the equations above, but they still hold true. The number of cycles N used in the industry varies from one to another but the ISO norm specifies that excessive testing is not good since command conditions can vary - that said, minimal testing will not provide a strong reliability reading in the results. The ISO norm specifies a minimum of 10 measurements for each axis. For example, Schunk's method of testing their grippers specifies 100 consecutive strokes, while some other companies testing will be based on 10 strokes (minimum) or some others on 40 hours of testing (way too much).