6 Things That Are Possible With Dual Grippers (+ 3 That Aren't)

What can you do with a dual gripper? Decrease cycle time, increase payload, and much more… but a few things are just impossible.

Earlier this year, we announced our new URCap, which allows easy integration of dual grippers onto Universal Robots. This feature opens up a whole new world of possibilities for improving your robot cells.

But, what can you do with a dual gripper? And, what can't you do? 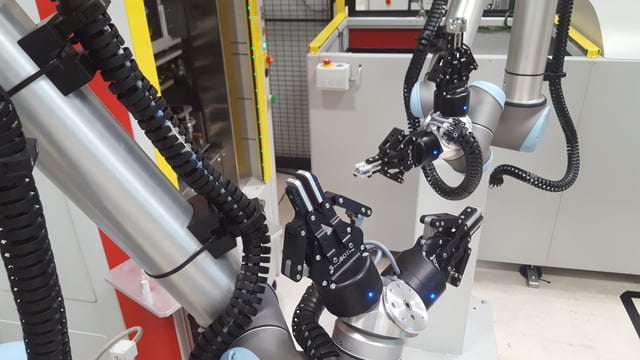 What Are Dual Grippers?

First things first, as the name suggests, a dual gripper means using two grippers on one robot. This is made possible by combining three components:

With these components you can add dual-gripper functionality to a UR robot without the need for any additional programming.

6 Things You Can Do With a Dual Gripper Robot

So, why would you want dual grippers? Here are six great reasons.

The main advantage of using multiple grippers is to reduce the cycle time of a process, which then increases its throughput. This is possible because a dual gripper allows you to pick up multiple objects at once.

You are no longer restricted to the sequence of: pick up one object, move, place the object, return to the start position and repeat. You can now pick up two or more objects at once, which significantly reduces the cycle time immediately. Of course, you could achieve a similar benefit with a custom end effector. However, the advantage of a dual gripper is that you do not sacrifice any of the robot's flexibility, as you would using a custom end effector.

Our 2-Finger Grippers each have a maximum recommended payload capacity:

If you want to lift heavier objects, you can easily increase the payload by installing a dual gripper in a parallel arrangement (i.e. so that the grippers align with each other).

For example, using two 2-Finger 85 Grippers on a UR10 robot would give you a payload of around 8kg (when you account for the weight of the grippers), which is 60% more than the individual gripper can handle.

2-Finger Grippers are great for most grasping applications. However, sometimes two contact points just isn't enough. For example, long objects with oddly distributed weight have a tendency to move around when picked up with only two contact points.

You don't need to use the same type of gripper in a dual setup. It's also possible to attach different end effectors to suit your grasping needs. For example, using the same setup I described above you could use a 2-Finger 85 Gripper to grasp small, heavy objects and use a 2-Finger 140 Gripper for larger, lighter objects .

Also, there's no need for both end effectors to be grippers. This video shows an application where a Sawyer robot has been fitted with both a gripper and dual suction cups.

Some processes involve multiple parallel tasks, which could be run concurrently by using dual grippers. This may make the planning more complex, but the time savings are worth it.

Packaging applications can benefit hugely from dual grippers, particularly boxing and palletizing. The bottleneck of these tasks is the movement time between the pick-up location and the pallet. By holding two (or more) objects at once, you can effectively half the task time.

Over on the DoF forum, Tyler Martin showed how this works for palletizing mobile phones. Here's a video of his application.

3 Things You Cannot Do With a Dual Gripper Robot

Unfortunately, not everything is possible with a dual gripper setup. Here are three things to bear in mind when you are thinking about applications.

1. Increase Overall Payload of the Robot

As I mentioned above, you can increase the grasping payload by using a dual gripper. However, you cannot increase the payload of the robot itself. In fact, you will decrease the overall payload by adding an extra gripper.

For example, imagine you are using a UR10 robot (with 10kg payload capacity) and a single 2-Finger 85 Gripper (weighing 850g). The payload capacity of this setup is 5kg — the recommended limit of the gripper.

Now, you add an adapter plate (weighing 265g) and a second gripper of the same type. Together, the two grippers and adapter plate weigh a total of 1.97kg (2x0.85kg+0.27kg). The payload capacity of this setup is now 8.04kg (10kg payload capacity of the UR10 minus the weight of the grippers). This is higher than the original setup, but less than the payload of the robot. If you wanted to increase the capacity beyond this, you would have to select a stronger robot.

Grasping of complex objects may require a multi-fingered gripper. This allows the robot to perform a variety of advanced grasps, including power grasping a spherical object and precision grasping a flat disk.

One advantage of using a dual gripper is that you only need one robot arm. However, this can also be a disadvantage. True bimanual manipulation (which humans do) is only possible with two arms. For example, a dual gripper would not enable the robot to hold a plastic bottle in one gripper and unscrew the cap in the other. In practice, there are usually ways to overcome these limitations (e.g. by fixing the bottle to a surface) but it is important to keep in mind that a few tasks may need two arms.

We support up to four 2-Finger using our new URCap. But, watch out for that payload! Four of our 2-Finger 140 grippers would weigh a total of 4kg. That would reduce the overall payload of the robot quite a lot.

What other ideas do you have for dual gripper robots? Could any of these applications work for your process? How much cycle time could you save with a dual gripper? Tell us in the comments below or join the discussion on LinkedIn, Twitter, Facebook or the DoF professional robotics community.