5 Ways Robotics Are Used in Medicine and Healthcare

Would you let a cobot cut your bones!? This is just one of the ways that collaborative robots are being used the healthcare sector. Robotics in medicine can happen in many ways, here are some.

Healthcare has been predicted as "a promising industry for robotics" for the last 45 years or more. Since as far back as 1974, researchers have been looking for ways to incorporate robotics into medical applications.

It's for this reason that I've been quite surprised by the slow uptake of robotics into the healthcare sector. Until fairly recently, the promise has been mostly theoretical. Lots of hype, media stories, and research studies, but with very few robots in hospitals and medical centers.

Now, however, robotics is starting to really make waves in medicine. Collaborative robots are even making their way into operating theaters!

Why robot uptake has been slow in healthcare

The most famous medical robot, the da Vinci Surgical System, is often used as an example to show that robots are very popular in healthcare. However, in reality the uptake of surgical robots has been relatively slow, even for this rockstar robot.

"Robotic surgery" (as doctors call robot-assisted laparoscopy) first became popular in the 1980s. The first surgery was performed in 1985 when a Puma 650 robot was used to improve precision in neurosurgical biopsies. But, by 2010 there were still very few surgical robots and only 131 hospitals had a da Vinci.

This slow uptake is partly due to the need for healthcare robots to be approved by governing bodies. The da Vinci was only FDA-approved in the year 2000 and by 2014 it was still the only FDA-approved surgical robot for head and neck surgery.

However, recently things are starting to change. In 2017, almost 45% of US hospitals had a da Vinci and a total of 9 medical and surgical robots had obtained FDA approval.

What about non-surgical robots?

Surgery is the most commonly discussed robotic application in healthcare, and perhaps the most successful so far. But, its not the only application. Other areas within healthcare which are starting to use robots include: telepresence, rehabilitation, medical transportation, sanitation, and prescription dispensing.

But, we're most interested in collaborative robotics. Let's look at cobot applications.

5 Ways Cobots Are Used in Medicine and Healthcare

Most modern healthcare robots are specially designed for their target applications. In other industries, like manufacturing, general purpose robots are much more common. 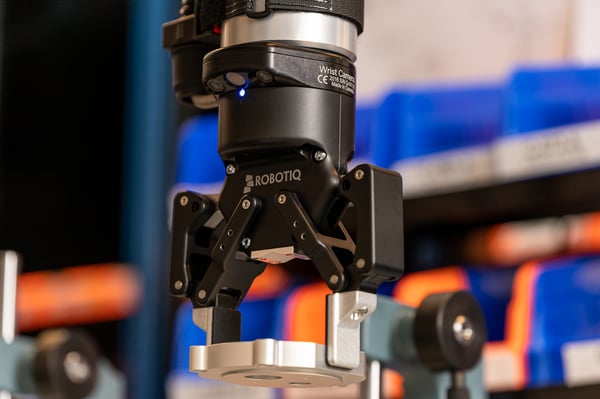 Packing is one of the most common tasks in logistics.

You might think that collaborative robots are too imprecise for such a specialized setting as medicine. However, at Robotiq, we think that there are almost always a few tasks in every business which can be achieved by a cobot.

Recently, we've even started to see a few real cobot applications starting to turn up in healthcare. Here are 5 of them:

Packaging is a perfect application for collaborative robots. In past articles, we've discussed successful packaging applications in a diverse range of industries, including food manufacturing, consumer goods, and logistics.

Medical devices provide some interesting challenges for packaging robots. For example, sterilization is vital for devices which will come into contact with people. When humans perform such packaging tasks, there is a high risk of contamination which would jeopardize the integrity of the products.

Cobots are a great way to reduce — or even eliminate — this contamination risk. They can perform those packaging tasks which require a completely sterile environment. In their article for MachineDesign, Nelipak Healthcare Packaging explained how they now use cobots to load sterile trays into a heat sealing machine.

Another robotic application which has clear benefits for healthcare is lab automation. Every day, a huge number of tests are performed in medical labs throughout the world. The British Medical Journal estimated that over 277 million blood tests were requested in the UK in 2014 alone.

These tests require a lot of repetitive actions… which sounds like a great candidate for cobot automation!

One lab in Copenhagen University Hospital was inundated with blood samples and needed to perform 3,000 tests per day. The team added two UR robots into their process which allowed them achieve some amazing productivity gains. Even though their workload increased by 20%, they were still able to deliver 90% of their tests within 1 hour. See a video of their case study here.

The previous two examples have been quite normal cobot applications: packaging and machine tending. However, cobots are also being applied to more surprising applications. A company called Synaptive Medical has created a cobot-based product for neurosurgery! Using a UR robot!

Before you get the wrong idea, the cobot doesn't perform the actual surgery itself. Instead, the cobot is used to position a digital microscope, allowing neurosurgeons to get the best view of the surgery and increasing their precision.

If the surgeon wants to move the microscope during a procedure, they can do so either by physically moving the robot or by directing it to move via the software interface.

Okay, so the previous surgery cobot didn't get its "hand dirty" by actually performing surgery. However, this example certainly does.

The CARLO system uses a cobot (a KUKA lightweight arm) to perform laser bone ablation. Ablation is a procedure where part of the bone is cut away to remove a benign growth. CARLO (which stands for Cold Ablation Robot-guided Laser Osteotome) is "the world's first medical, tactile robot that can cut bone without contact and with cold laser technology."

If you thought that cobots weren't precise enough for surgery, I think this application shows that they certainly are!

I'll admit it. This last healthcare application is a bit silly. However, I saw it in an article that UR wrote a while back and I thought it was just too bizarre for me not to mention it. Also, the robot is called Alex, which obviously caught my attention. 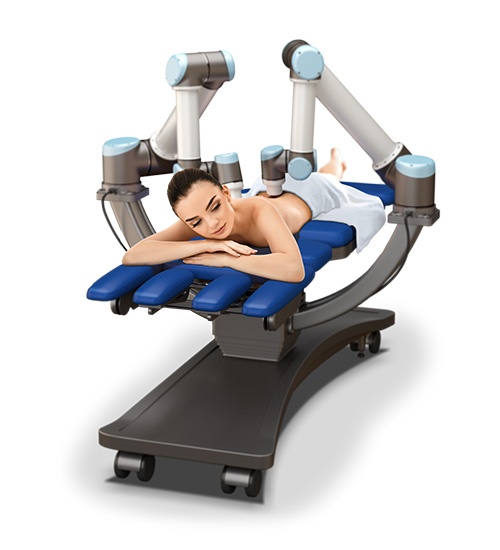 A Californian startup called Massage Robotics has designed a robot which takes the role of a physiotherapist. Using two UR robots, it can give users a full body massage using round end effectors which roll over the skin. I guess that the whole setup is a bit like a full-sized version of those "back massage" gadgets that are popular Christmas presents at the moment.

Unlike all the other four examples that I've mentioned in this article, this last one is also the least realistic.

It's a fun idea about how collaborative robots could apply to healthcare, but it isn't a great cobot application. It doesn't really address a problem which exists within healthcare. This is reflected in the fact the startup has remained silent for over a year and has struggled to find funding.

The best cobot applications solve real problems. That's true whether we're talking about the healthcare industry as a whole or just the specific needs of your business.

Want to learn how to pick the best application for your cobot? One which solves a real problem in your business? Check out our eBook Getting Started With Collaborative Robots.